This year the Eid al-Fitr celebration will not take place for 170,000 displaced Gazans, but their strong spirit resists as they have nothing else to lose 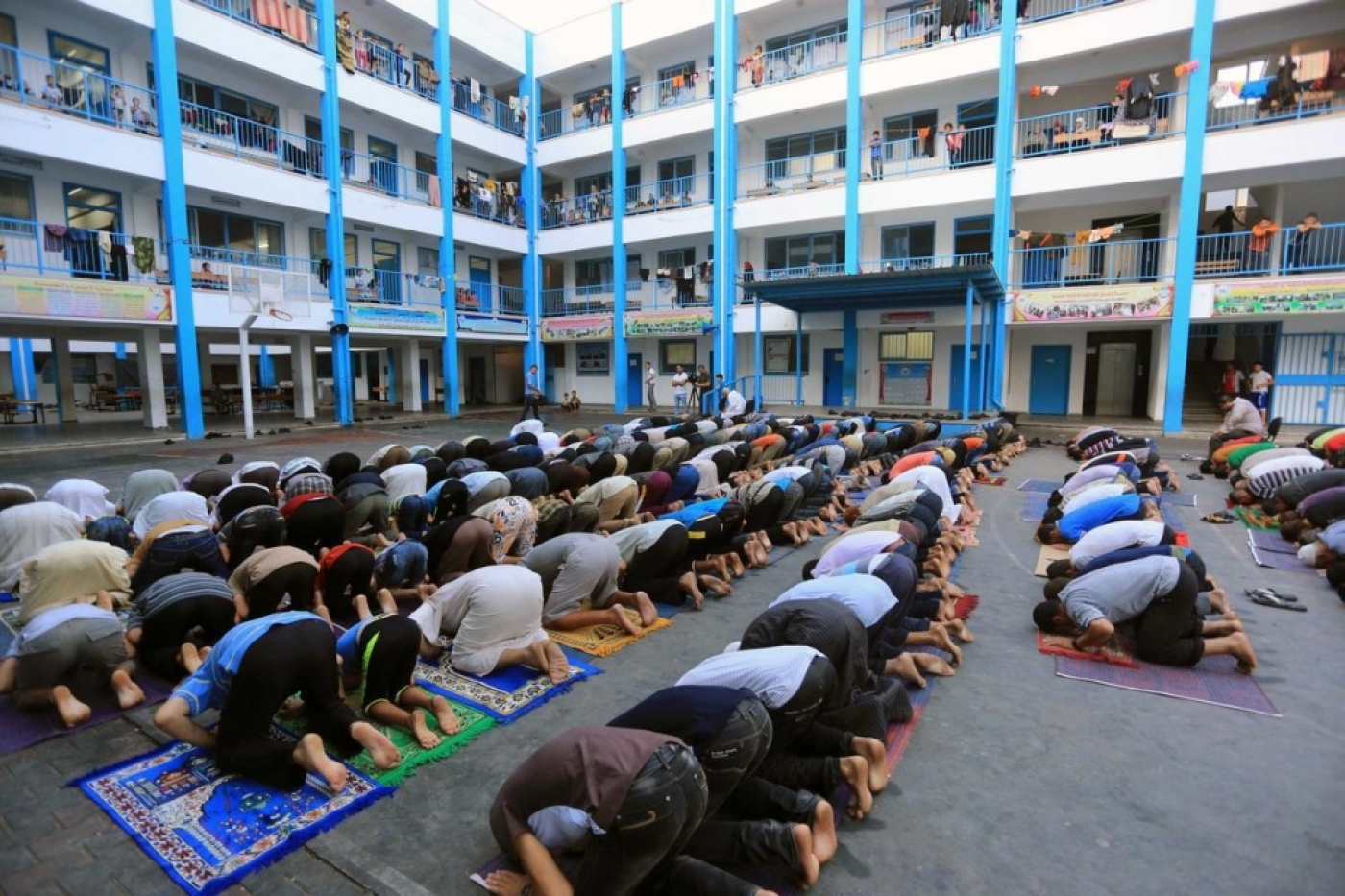 Palestinians perform Eid al-Fitr prayer on the yard of a United Nations school where they refuge while fleeing from Israel's attack in Gaza city, on 28 July (AA)
By
Mohammed Omer

GAZA CITY - Amjad Habeeb should be celebrating Eid al-Fitr on Monday with his children and his wife. Marking the end of the holy month of Ramadan, Muslims celebrate Eid al-Fitr with exchanges of visits and gifts between relatives and friends.

This year, the devastating impact of Israel’s Operation Protective Edge means the 33-year-old has nothing to offer his family except for goodwill. He has nowhere to receive relatives, as his house is located in the Shejaiya area which has been razed by Israeli strikes.

The reality of this year’s Ramadan for Amjad is that he is dependent on what the United Nations Relief and Works Agency for Palestine Refugees in the Near East (UNRWA) can offer him - he and his family are sheltering at a UNRWA school.

There is no need to ask him how or what he feels. He had earned his living as an electric technician, but can no longer house or feed his family.

“A week ago we ran away from our home,” he says, pausing to watch his four children: 12-year-old Mohammed, 10-year-old Laila, 7-year-old Shams and 4-year-old Abdel Rahman.

“We ran away under Israeli artillery shells at 6 am,” he says as he touches the hands of his daughter Shams who is sleeping in a dusty, bare classroom. Amjad’s family and others sharing the room have hung spare clothes up across the windows to create some shade and keep temperatures down, while also creating a semblance of some privacy.

His voice seems tired and cracked - but he can still speak about his experience from Israel’s offensive. “The target was never the resistance, the aim was to kill us, destroy our homes and uproot us all again,” he says.

Despite the 24-hour ceasefire agreed upon by Israel and Hamas, he still finds it difficult to return home. This year the Eid celebration will not take place for Amjad and his family and 170,000 displaced inhabitants of Gaza.

In previous years, he was one of the few lucky Gazans who could afford to buy new Eid dresses for his daughters and suits for his two boys.

“[Israeli Prime Minister Benjamin] Netanyahu did not intend for us to celebrate. But he underestimates our strong spirit to survive.”

Amjad echoes the voices of hundreds of displaced families who have no connection to Gaza’s resistance, or resistance in their neighbourhood of Shejaiya either. The only link is that they all happen to live in Gaza.

“We hear rockets still being fired from Gaza - but Netanyahu can’t pretend that he has achieved anything apart from hurting more trapped civilians.”

“As long as Netanyahu continues this war, it means he did not achieve his goals.”

Habeeb says that Netanyahu knows that in the eyes of the Israeli public and voters, not achieving his objectives means that both his party and political framework signifies Netanyahu is out of Israeli politics as a whole.

In Gaza, there is a belief among the population that the continuation of the offensive reflects that Netanyahu is in trouble, but Amjad and people sleeping in UNRWA schools question why they must pay the price for Israel’s internal politics.

“The last time I saw fighters in my neighbourhood was seven years ago.”

Habeeb says it is ambitious Israeli leaders who see themselves as Netanyahu’s future successors.

“They pushed him more, to perform a bigger show of war, so they can take his position when Israel sees his failure to crack down Palestinian resistance.”

Meanwhile, Palestinian resistance groups in Gaza say they will continue their retaliation until their conditions are met: ending the long blockade of Gaza, releasing prisoners arrested in the past two months, and the opening of all borders.

“Naftali Bennet is waiting for Netanyahu to fail, to present himself as a harder candidate for the next election,” adds Habeeb.

The announcement by Israel and Hamas in accepting the UN initiative for a 24-hour humanitarian ceasefire appears not to have held as both Hamas and Israel exchanged accusations of not respecting the ceasefire. Hamas accused Israel of bombing Khuzaa and other places within the ceasefire time.  Sixteen Palestinians were killed and 30 were injured on Sunday, while one Israeli was injured.

Habeeb says the offensive will continue for some time, but a ceasefire for humanitarian reasons will be the norm.

“I think both parties want a ceasefire, but Palestinian resistance and Israel are pressuring each other to accept ceasefire conditions.”

Regional and international parties are unable to end the offensive on Gaza and Hamas is at odds with Egypt for supporting the Muslim Brotherhood in Egypt.

Habeeb believes that with or without Gaza’s resistance, the killing continues.  He says killing is “Israel’s favourite sport”, and always prior to its national elections.

For him, the Israeli public must be aware that Israel’s military offensive has failed in achieving its objectives and he invited the world to start bringing those responsible for killing Gazans to international criminal courts.

Habeeb says people who had lost their homes and children have nothing more to lose. The trend is increasing among people to support resistance. He himself did not support the resistance a few months ago, but now he says there is nothing much left to do after all else has failed.

“I shall remain patient because this is my home. I belong here and will never leave Palestine.”

When Habeeb is asked by Middle East Eye - as he wanders around the UNRWA school room with its blue-painted walls, looking for piece of carton for his daughter Sham to sleep on - what he would say to the Israeli public if given the chance, he responds:

“Allah is watching and only he will judge Netanyahu and his military.”  He then pauses to comfort his impatient child crying from hunger and the heat.

“Your prime minister has failed his objectives, the resistance fighters are still alive. It is we civilians who are killed with our children.”