All eyes on Georgia: What are the implications of US Senate runoffs?

If they win both races on Tuesday, Democrats will gain control of the Senate, boosting Biden's governing agenda 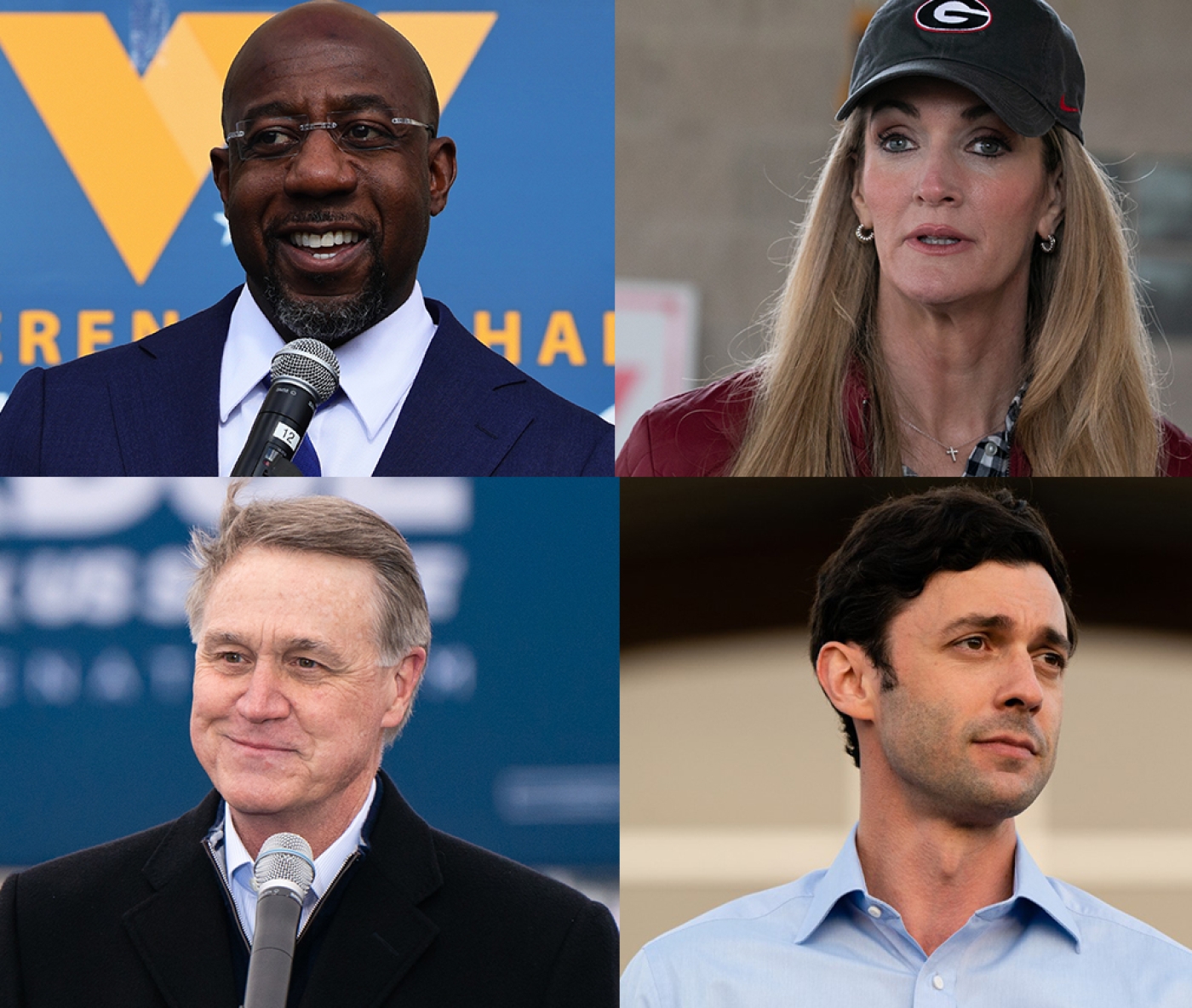 The US election season is not over yet. One final set of competitive Senate runoff races in Georgia on Tuesday will decide which party will control the upper chamber and how President-elect Joe Biden will govern in the first half of his term.

In November, none of the four major candidates for Georgia's two senate seats was able to win a majority of the votes, prompting a rare runoff election in accordance with the state's electoral law.

As things stand, Republicans have a slim 52-48 majority in the Senate.

If Democratic challengers Jon Ossoff and Raphael Warnock succeed in unseating GOP incumbents David Perdue and Kelly Loeffler on Tuesday, the Democrats would gain control of the legislative chamber.

With 50 out of 100 senators and incoming Vice President Kamala Harris serving as the tiebreaker, Biden's party, which has a majority in the House of Representatives, would be firmly in control of Congress and capable of pushing through his agenda over the next two years. 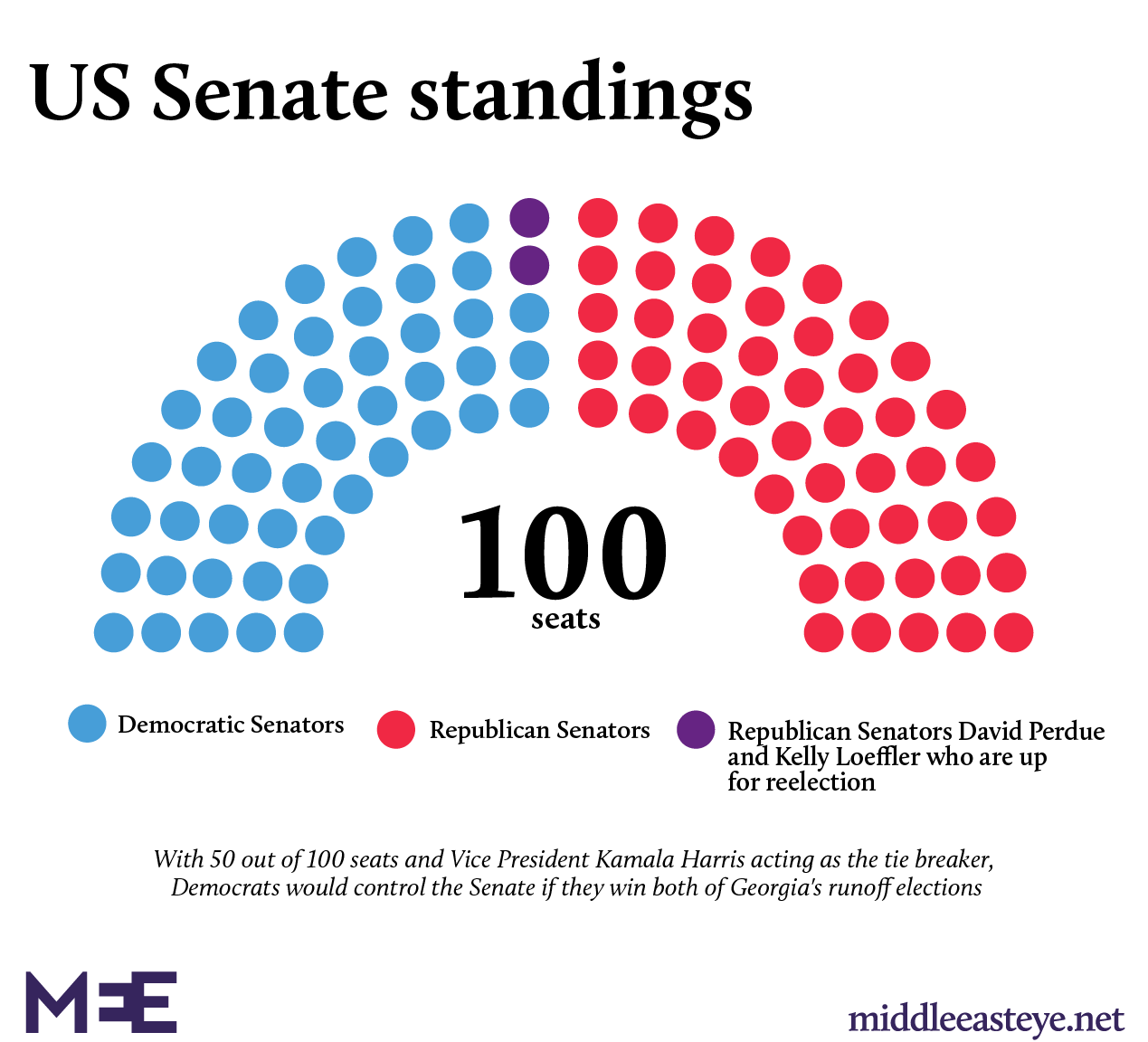 Presidents can only support the bills they want and urge supporters in Congress to back them, so without a majority in one of the legislative chambers, their agendas can be solely advanced by executive power.

Senate confirmation is also required for the president's cabinet nominees and the federal judges he appoints. Moreover, controlling the Senate would allow Democrats to choose the majority leader as well as the head of committees.

Current Leader Mitch McConnell has been frustrating Democratic legislative efforts for years by blocking hundreds of bills that he opposes from even reaching the floor for a vote. In 2016, McConnell also prevented then-President Barack Obama from confirming a nominee to the Supreme Court after the death of conservative Justice Antonin Scalia. The president enjoys near unilateral control over most aspects of US foreign policy and immigration rules.

Over the past four years, Donald Trump demonstrated those powers when he moved the American embassy to Jerusalem, withdrew from the Iran nuclear deal, imposed the "Muslim ban" and scaled back refugee admission without input from Congress.

So, regardless of who wins on Tuesday, Biden can reinstate the nuclear agreement with Iran, end the Muslim ban and resume aid to Palestinians as he has previously pledged. The US president-elect has ruled out returning the embassy to Tel Aviv but said he would open a consular office for Palestinians in East Jerusalem.

Still, legislators can push to pressure the president on his approach abroad. For example, in 2019, Congress passed a law to end US support for the Saudi-led coalition in Yemen, but it was vetoed by Trump. Lawmakers can override a presidential veto with two-third majorities in both the House and the Senate, but they did not have the votes to overrule Trump on Yemen.

Congress has the power to declare war and ratify treaties. But Congress seldom uses its war declaration powers. The last time it did was during World War II.

Biden is also unlikely to seek the ratification of the Iran nuclear deal as a treaty.

Even as a minority, Republicans would retain the power to block major legislation by using a legislative tool called a "filibuster" - pledging to endlessly debate a bill. Closing the debate, known as "cloture", requires two-thirds of the votes.

In the not-too-distant past, Georgia, like the rest of the American South, was a solidly Republican state.

But with changing demographics and political alignments, Biden was able to win the state in the November presidential election. The same race, however, gave Senator Perdue a slight edge over Ossoff, but he fell short of winning 50 percent of the votes.

The Senate has 100 members, two representing each of the 50 states. US elections 2020: Muslims in state of Georgia mobilise for Senate runoff
Read More »

Senate races for the same state usually do not happen simultaneously. But Perdue was due for reelection with his first term in Congress coming to an end, and a second special election is being held to fill the seat of Senator Johnny Isakson who retired in 2019 for medical reasons.

Muslim-American Democrats have been campaigning for Ossoff and Warnock and urging the state's Muslim minority to come out in large numbers on Tuesday.

"Participating in a democratic process allows our voice to be at that table, where we are not just going to be talked about, but we are a part of the conversation," Congresswoman Ilhan Omar said at a virtual event for voter engagement in Georgia last month.

Senator Loeffler has been accused of associating with bigots, including newly-elected Congresswoman Marjorie Taylor Greene, a Republican who has expressed Islamophobic and racist views and promoted elements of the conspiracy theory QAnon.

In an online feud with Omar in November, Loeffler falsely accused the Muslim-American congresswoman of "smiling and laughing" when talking about the 9/11 attacks, calling on her to be expelled from Congress.

With the coronavirus raging across the country, killing thousands daily and plunging scores of people into poverty, foreign policy was not a major factor in the presidential election this year.

In two debates, the topic barely came up. The economy, race relations, health care, and the environment were the dominant subjects.

But in a Georgia Senate race where the winner has far less say over foreign policy, the Israeli-Palestinian conflict has become a topic of debate and campaign ads.

Late last year, past remarks critical of Israel by Warnock came to the surface, prompting accusations of anti-Israel animus and antisemitism from Loeffler. Warnock, who is a pastor, had signed a statement comparing the Israeli occupation in the West Bank to apartheid in South Africa after a visit by religious leaders to Israel and the Palestinian territories.

In a 2018 sermon, Warnock also slammed Israel's deadly crackdown on the Great March of Return in the besieged Gaza Strip.

"We saw the government of Israel shoot down unarmed Palestinian sisters and brothers like birds of prey," Warnock says in the sermon.

Loeffler has been incessantly citing Warnock's criticism of Israel over the past few weeks to paint him as a radical.

"Warnock has a long history of anti-Israel statements and positions," Loeffler's campaign said in a statement in November, citing her opponent's support for the Black Lives Matter movement, which it called antisemitic.

In the face of the attacks, Warnock ran in the opposite direction, pledging to support unconditional military aid to Israel.

He also denounced the Palestinian-led Boycott, Divestment and Sanctions (BDS) movement, accusing it of the same charge he is facing - antisemitism.

Last month, the reverend welcomed the endorsement of the Democratic Majority for Israel, a hawkish Democratic group that recently circulated a memo in Congress justifying the home demolition of Palestinians in the West Bank.