German journalist and translator, Mesale Tolu (centre), who is on trial in Turkey on terror-related charges, and her husband walk outside the Caglayan courthouse in Istanbul (AFP)
By
Alex MacDonald

The trial of a German journalist was postponed on Tuesday after she voluntarily returned to Turkey to attend the hearings.

Mesale Tolu, a German citizen of Turkish origin charged with publishing "terrorist propaganda", told German media that she hoped that attending the trial and pushing for acquittal could help lift a travel ban imposed on her husband.

Tolu was first imprisoned in May 2017 following a raid on her house in Kartal in the Istanbul area. She remained in prison until December, when she was a released with a travel ban, which was then lifted in August when she returned to Germany.

She faces up to 20 years in jail if convicted.

Her husband Suat Corlu, a Turkish citizen, was arrested in April 2017 and once again in January over similar charges. On Tuesday, it was announced by the court that his travel ban would be lifted.

"We are victimised as a family. We were arrested in 2017, my child had to live in prison with me," Mesale Tolu said during the hearing.

Tolu's work featured heavily in left-wing and pro-Kurdish organisations such as Firat News Agency (ANF) and Etkin News Agency (ETHA). The government accuses her and her husband of ties with the outlawed Marxist Leninist Communist Party (MLKP).

Among the evidence cited is her attendance of a memorial service for Ivana Hoffman, a German MLKP member who died while fighting the Islamic State group in northern Syria.

The court on Tuesday ruled that her trial would be postponed until January 2019.

Tolu was among 26 employees of Etkin facing trial on Tuesday.

Tuesday also saw a hearing in the ongoing trial of Ugur Yilmaz, a former photojournalist for the now closed Dicle News Agency (DIHA), who was arrested in July 2017 on charges of "membership of a terrorist organisation".

Speaking in his defence on Tuesday, Yilmaz - who has been imprisoned for 15 months - denied any links to terror groups.

"I reject all accusations made against myself," he said. "I am a journalist and I did my job."

Turkey has been branded the world's worst jailer of journalists, with 27 currently in jail in the country according to Reporters Without Borders (RSF).

Arrested journalists are regularly accused of being supporters of the Gulen movement, which the Turkish government holds responsible for a July 2016 coup attempt, or the Kurdistan Workers Party (PKK), and armed leftist groups such as the MLKP.

Tens of thousands of people have been arrested or fired since the 2016 coup.

According to German Foreign Minister Heiko Mass in August, at least seven German citizens were being detained by Turkey for reasons that were "politically motivated and incomprehensible to us".

The Tolu case follows on the heels of Deniz Yucel, a joint German-Turkish citizen who was held for more than a year in jail in Turkey over accusations of support for "terrorist" organisations.

The incident contributed to a diplomatic row between Turkey and Germany, which has only recently begun to subside.

Unlike Yucel, Tolu renounced her Turkish citizenship after acquiring German citizenship in 2007.

Speaking after her release in August, Tolu said that Turkey was continuing down a path away from democracy and that she could not be satisfied while "colleagues, opposition figures, lawyers and students" remained behind bars.

"I can't really be happy about being able to leave, because I know that nothing has changed in the country where I was locked up," she told a news conference after landing at Stuttgart airport.

"I don't think that anything has changed in the country in the direction of democratisation." 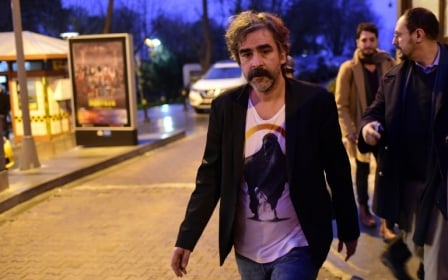