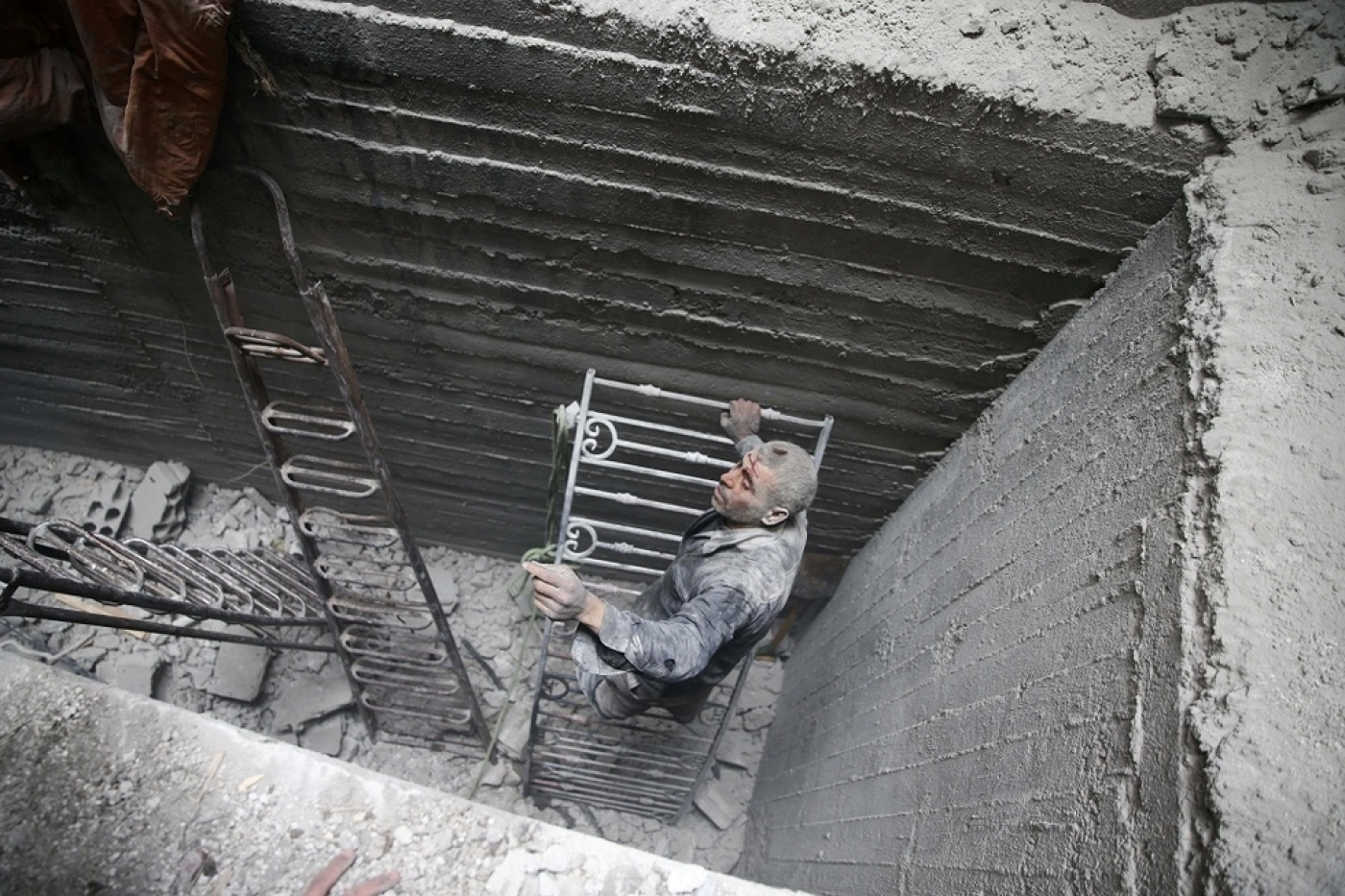 A wounded man is seen in a shelter in Douma on 22 February (Reuters)
By
Areeb Ullah
, Zouhir Al Shimale

The mothers soothe their children as they huddle together in a dark, airless hole in the ground below the streets of Eastern Ghouta while the blast, shrapnel and fire of incessant bombing rips apart their homes only metres above.

Staying alive in the rebel-held suburbs of the Syrian capital means getting as deep as possible, be it a basement, a sewer or a hole dug during the years of siege by Bashar al-Assad's forces. And staying there for hours on end.

The children do nothing but scream in the shelters. No one can sleep because of the shelling

And whatever conditions they face underground - cramped, no sanitation, little water, little fresh air - they are better than the hell on earth above them.

Residents spoken to by Middle East Eye say there is "no life" outside their shelters, and death is a near certainty for those venturing into the streets amid Assad's onslaught, which has killed 400 since Sunday while the UN Security Council has delayed a resolution for a 30-day ceasefire.

Adnan Abdulrazaq, an engineer, his pregnant wife and their child, are one of the many families in the town of Douma who have spent the majority of their time underground since the bombing intensified on Sunday.

"The children do nothing but scream in the shelters. No one can sleep because of the shelling," he told Middle East Eye, during a lull in the bombing on Friday.

"Many parents sleep only for a few hours and stay awake to make sure their children are safe.

There is no life outside these shelters. Most buildings have either been damaged or destroyed

"There is no life outside these shelters. Most buildings have either been damaged or destroyed.

"Dozens of families are hiding together. These shelters were not designed to hide in, but they are the difference between life and death."

Abdulrazaq said those pushed underground had little access to water, food or sanitation.

"We survive by using generators to pull out water from the ground. But this cannot be a permanent solution as there continues to be a fuel shortage inside Eastern Ghouta."

Nour Waheeb has been inside an underground tunnel in Douma city with her family since Sunday.

"We brought blankets and mattresses so we can stay warm inside the tunnel," said Waheeb.

"Many families do not have food and rely on soups for sustenance. Some boil beans to keep going and mothers have sacrificed their meals to make sure their children don't go hungry."

Nermen Hamde, also of Douma, said living conditions had become unbearable. A lack of water meant many residents had not showered for weeks in a bid to preserve the supplies in the underground bunkers.

"The generators don't work much any more, and we need to use them to pull the water from inside the underground wells," Hamde told Middle East Eye.

"The water we get from the generators is not enough for everything we need. Since the siege began, having a shower is a luxury."

The tunnels, basements and shelters however do not guarantee safety, and a direct hit can be - and has been - catastrophic. Earlier this week, doctors inside Eastern Ghouta said Syrian government jets had been targeting shelters and killing dozens in one go.

"When the regime attacks a shelter, it becomes overwhelming because we are dealing with 15-20 people all at once," Dr Ataya Malik told MEE. 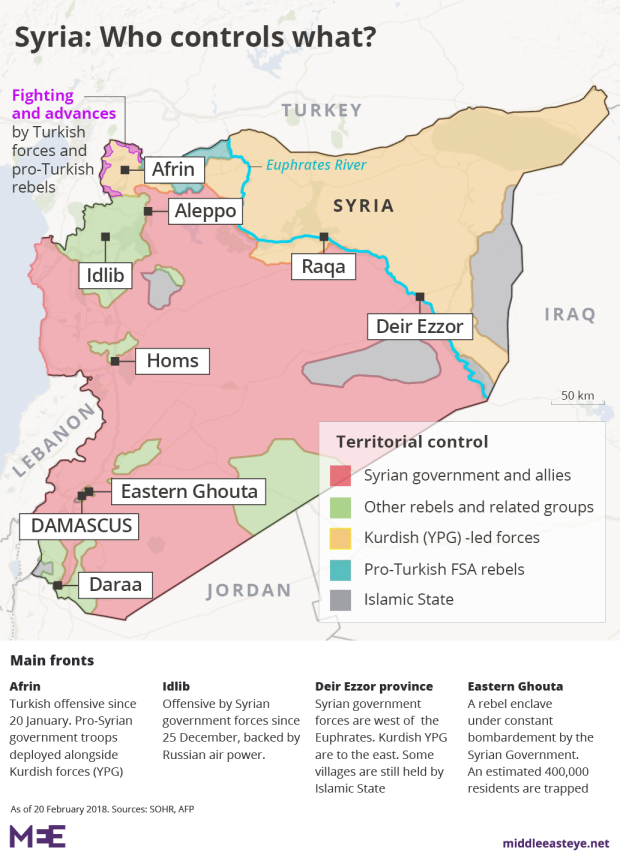 On Tuesday, UNICEF issued a "blank" statement in a desperate bid to garner attention to the dire situation unfolding in the rebel enclave.

Juliette Toma, UNICEF's regional chief of communications in the Middle East and North Africa, justified the blank statement as a last-ditch attempt to help Syrian's children.

"We've done hundreds of interviews and media interviews, short films, everything possible to speak about the suffering of Syria's children," Toma told MEE.

"We put this blank statement to express our concern and feeling that our words would not do justice to those killed." 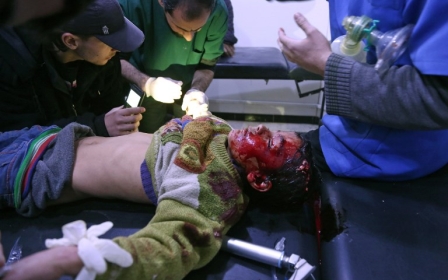 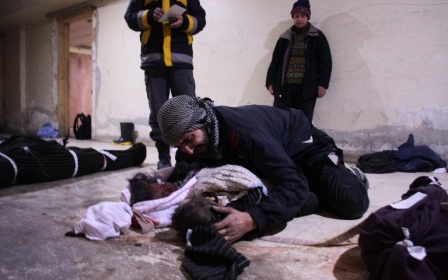 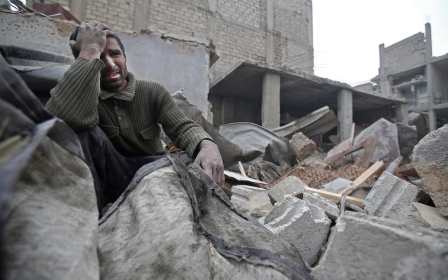