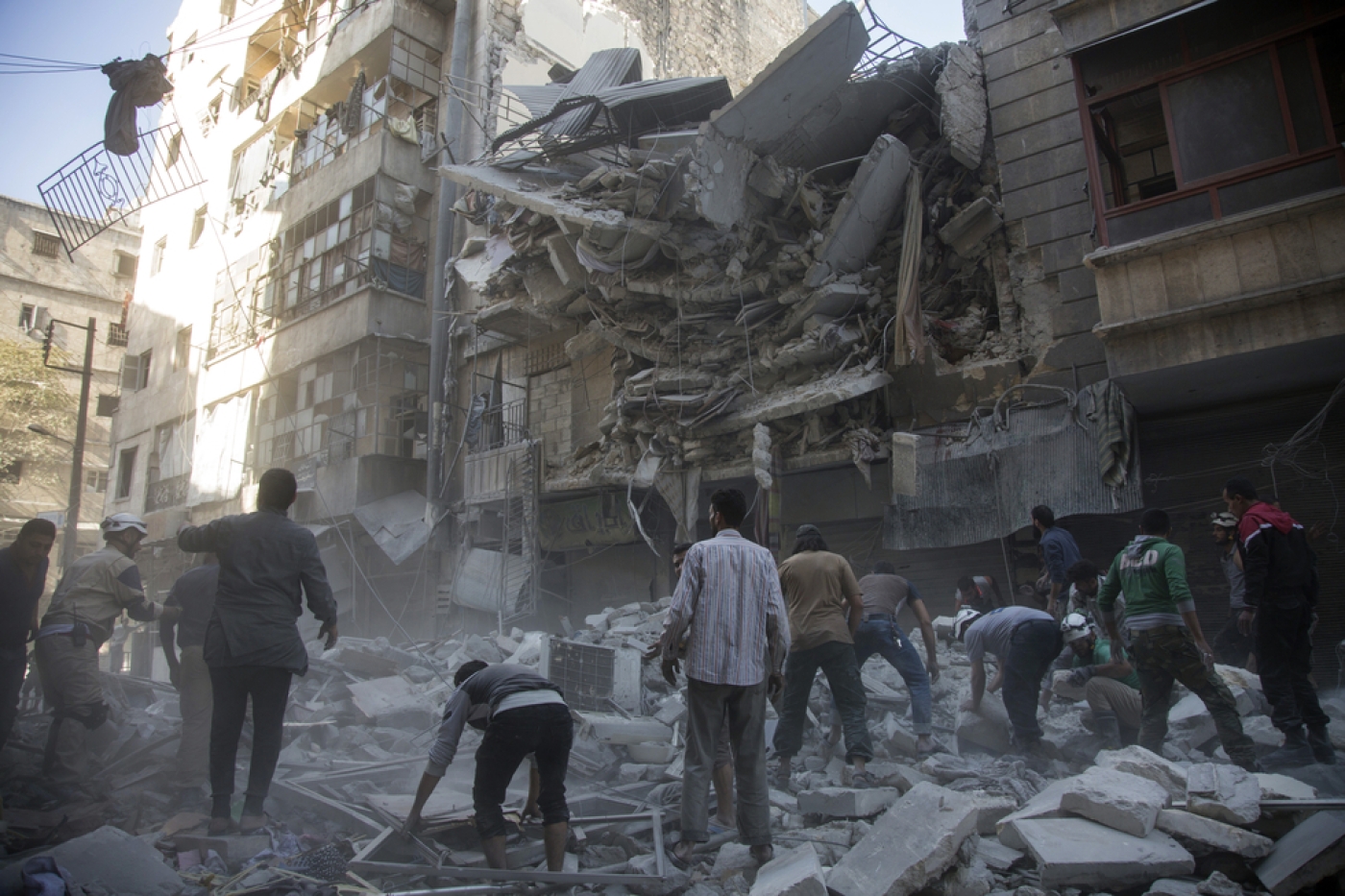 World Health Organisation says that 338 people were killed, more than 800 wounded (AFP)
By
MEE and agencies

Syrian government forces pressed an assault on eastern Aleppo amid reports of more than 300 people killed in the besieged city, attacks on vital services and Russian plans to boost its forces based in Syria.

Doctors Without Borders (MSF) on Friday appealed to the Syrian government and its Russian ally to stop bombing rebel-held eastern Aleppo, warning they were provoking a "bloodbath" among civilians in the city.

"Bombs are raining from Syria-led coalition planes and the whole of east Aleppo has become a giant kill box," MSF director of operations Xisco Villalonga said in a statement. "The Syrian government must stop the indiscriminate bombing, and Russia as an indispensable political and military ally of Syria has the responsibility to exert the pressure to stop this," he said.

The UN has warned that a humanitarian catastrophe is unfolding in Aleppo unlike any witnessed so far in Syria's brutal five-year war, which has claimed more than 300,000 lives.

The fighting came as the World Health Organisation said 338 civilians, including 106 children, had been killed and 846 wounded in the past few weeks in the city, which has suffered intense bombardment by the Syrian and Russian air forces since the collapse of a ceasefire.

Reports from inside Aleppo on Friday said that artillery had targeted the Suliman Alhlabi water plant in the early hours of the morning, cutting supplies for the hundreds of thousands of people trapped in the city.

WHO's humanitarian chief Rick Brennan: "We are asking for four things: stop the killing, stop attacks on health care, let the sick and wounded out and let the aid in."

Russia, meanwhile, was reported to be sending more attack aircraft to Syria, including fighter bombers - a day after the US said it was considering stopping all coordination with Moscow in the war. According to the UN, only about 35 doctors remain in eastern Aleppo, where an estimated 250,000 people have been under siege by government forces since early September.

The MSF statement cited numbers from the east Aleppo health directorate, showing that from 21 to 26 September, the few hospitals still functioning in the rebel-held part of the city received 278 dead bodies, including at least 96 children.

More than 822 wounded were also taken in, including at least 221 children, it said.

"All intensive care units are full. Patients have to wait for others to die so they can be moved to an available bed in intensive care," Abu Waseem, manager of an MSF-supported trauma hospital in east Aleppo, said in the statement.

"We only have three operating theatres and yesterday alone we had to do more than 20 major abdominal surgeries," he said, pointing out that "hospital staff is working up to 20 hours a day. They cannot just go home and let people die."

MSF said it had last been able to deliver medical supplies to east Aleppo in August, and warned that the huge number of wounded was rapidly depleting the stocks in the remaining hospitals.

"Now, with a complete siege on the city, attacks on humanitarian convoys and intensive bombing, we are powerless," Villalonga said, warning that "if this intensity of bombing continues, there may not be a single hospital standing in a few days."

He demanded that the bombing stop, and that the sick and wounded be evacuated from the city.

"Anything short of this is confirmation of what many are dreading, that the world has abandoned the people of Aleppo to a violent, agonising death," he said.

Hezbollah's al-Manar television said its forces and government allies had taken full control of the Handarat camp for Palestinian refugees and the nearby Kindi hospital area in northern Aleppo, opening the road to the opposition-held Heluk and Haydariyeh areas in the northeast of the city. A senior rebel source denied to Reuters, however, that the government had captured the Kindi hospital area, saying the battle was continuing.

The British-based Syrian Observatory for Human Rights also said that Russian air strikes had killed more than 9,300 people in the past year. Members of rebel groups as well as militants from the Islamic State group were included in the figure.

Aleppo residents also told MEE earlier this week that the government-imposed siege has led to fuel shortages and price increases.

Fighting is expected to intensify in the coming weeks as government-backed militias mass outside East Aleppo in preparation for a ground offensive.

Foreign fighters are expected to play a decisive role in the battle, as the Guardian on Thursday reported that 6,000 pro-government foreign fighters from Iraq, Iran, Lebanon and Afghanistan had massed outside the besieged city for what is planned to be an imminent advance.