Going back to the well: Yemen’s water crisis sees a revival of old methods

War and fuel prices have jeopardised access to water for millions, prompting a return to digging wells

According to UNICEF, safe water is now 'completely unaffordable' for two thirds of Yemenis (MEE)
By
MEE correspondent

TAIZ, Yemen - Raweh Mufleh thought he had retired a long time ago.

Now in his seventies, Mufleh was a well-digger in his youth. But slowly, as machines arrived and fuel became readily available, he turned to digging graves instead.

"In the last 30 years, people stopped digging for water by hand because of the spread of water pumps,” he told Middle East Eye.

Yet even as the world changed around him and he changed with it, Mufleh has held onto the past.

He still wears the traditional Yemeni futa – a cloth that men wear that runs from the waist to just over the feet – and goes barefoot because he says his feet are strong enough to trample on hot earth and thorns.

He has never had spaghetti, hamburgers or any Western meal, but prefers the Yemeni dishes that his wife cooks. They keep him strong, he says.

Keeping with his ways, Mufleh says he never would have imagined that he would dig wells once again, but today it’s exactly what he’s doing.

But with expensive fuel prices and damaged infrastructure, more than 12 million Yemenis are currently without access to clean water, according to the UN Office for the Coordination of Humanitarian Affairs.

In urban areas, many Yemenis now rely on NGOs and charities that supply water in barrels and bottles, but in the countryside, the distance to clean water may be a lot further.

“This could not come at a worse time for the children of Yemen reeling from violence, malnutrition and an outbreak of diseases including acute watery diarrhea and cholera,” said Geert Cappelaere, UNICEF regional director for the Middle East and North Africa.

"For over two thirds of Yemenis living in extreme poverty, safe water is now completely unaffordable.”

This could not come at a worse time for the children of Yemen reeling from violence, malnutrition and an outbreak of diseases

So residents are increasingly asking people like Mufleh to help them dig their own wells, something he’s more than happy to do.

"I learned this job from my work when I was young,” he says. “Also the repeated attempts to dig wells helped me to have a deep experience in this field.”

"I do not hesitate to help anyone, even for free, because I must help people overcome the water crisis.”

When he begins a search for water, Mufleh inspects the soil in an area, looking at its colour and the kinds of grass and trees that grow on it.

"These things help us to know if there is water at the bottom or not and we can decide how long we should dig,” Mufleh adds. He says he has guided dozens of people over the past year.

From place to place, the depth of wells will differ, with some reaching as deep as 60 metres, which is roughly equivalent to the height of Nelson’s Column in London’s Trafalgar Square.

For the past three years, Rafat Yassin and his family of six, who live in a rural area south of the city of Taiz, have struggled to maintain regular access to water after the state-run Water Cooperation halted operations due to the rising cost of fuel.

Yassin, the family breadwinner, makes windows and doors for a living, but cannot afford the $25 necessary to purchase water from a truck vendor to supply the family for a month.

Yassin watched as his neighbours dug wells, finding clean water, and started striking into the ground to find his own.

"I decided to imitate them as I believe this is the best solution nowadays,” Yassin tells MEE.

But about eight metres into the ground, Yassin decided to consult al-Zumaini, an elderly man in his eighties with a wealth of experience finding wells.

"He told me that I was digging in the wrong place and he recommended the best place to dig,” Yassin says. "I dug in the recommended place and we found wet soil after digging 30 metres.”

Yassin and a neighbour spent 10 days digging, but they are determined to continue now that they’ve found wet soil.

"If I find water, I will let all my neighbors fetch water from my well as many people are suffering,” he says.

Nozha Ahmed, 12, could use a well. She walks two hours a day to fetch water from the well nearest to her house in al-Shimayateen district, 50km south of Taiz city.

This has been her routine for the past three years, after the Taiz-based Public Corporation of Water stopped providing people with clean water as a result of the fuel crisis.

"It was very difficult in the beginning to bring the water by bottles on my head, but day after day I adapted,” she said.

Ahmed is the eldest of four siblings. Her father is busy working as a guard in a courthouse, so she is responsible for bringing 60 litres of water every day for her entire family.

Like many girls in Yemen, fulfilling her family's needs sometimes means that Ahmed, a student in sixth grade, misses class.

I hope that the Water Cooperation resumes its work and water can arrive to the house, so I will resume my regular study as before

"I hope that the Water Cooperation resumes its work and water can arrive to the house, so I will resume my regular study as before and I will not spend my time fetching water,” Ahmed said.

A well-informed source in the Water Corporation in Taiz, who spoke on condition of anonymity because he is not authorised to speak with media, told MEE that like many other public authorities, the agency stopped its work at the beginning of the war.

"Some officials are trying to resume the work of the corporation but it is difficult to do amid the expensive prices of fuel,” he told MEE. "People have gotten used to fetching water and it has become a part of their daily suffering.”

"The main problem is that there is no authority nowadays that can manage the work of the corporation, so I am not optimistic that it will start work again soon,” he added.

Mufleh, the wizened well-digger, said he wouldn’t wait on anyone for water.

"I advise the residents of rural areas who have a place to dig their own wells to do it,” he said. “It does not cost so much - people will get clean water for free.” 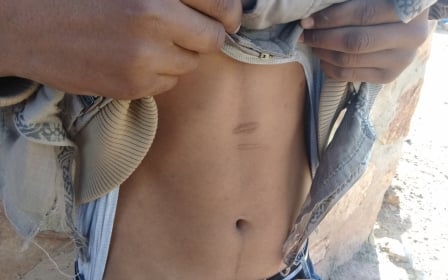