The Palestinian has been held at the prison for more than 14 years without charge, despite the CIA accepting he was never an al-Qaeda member 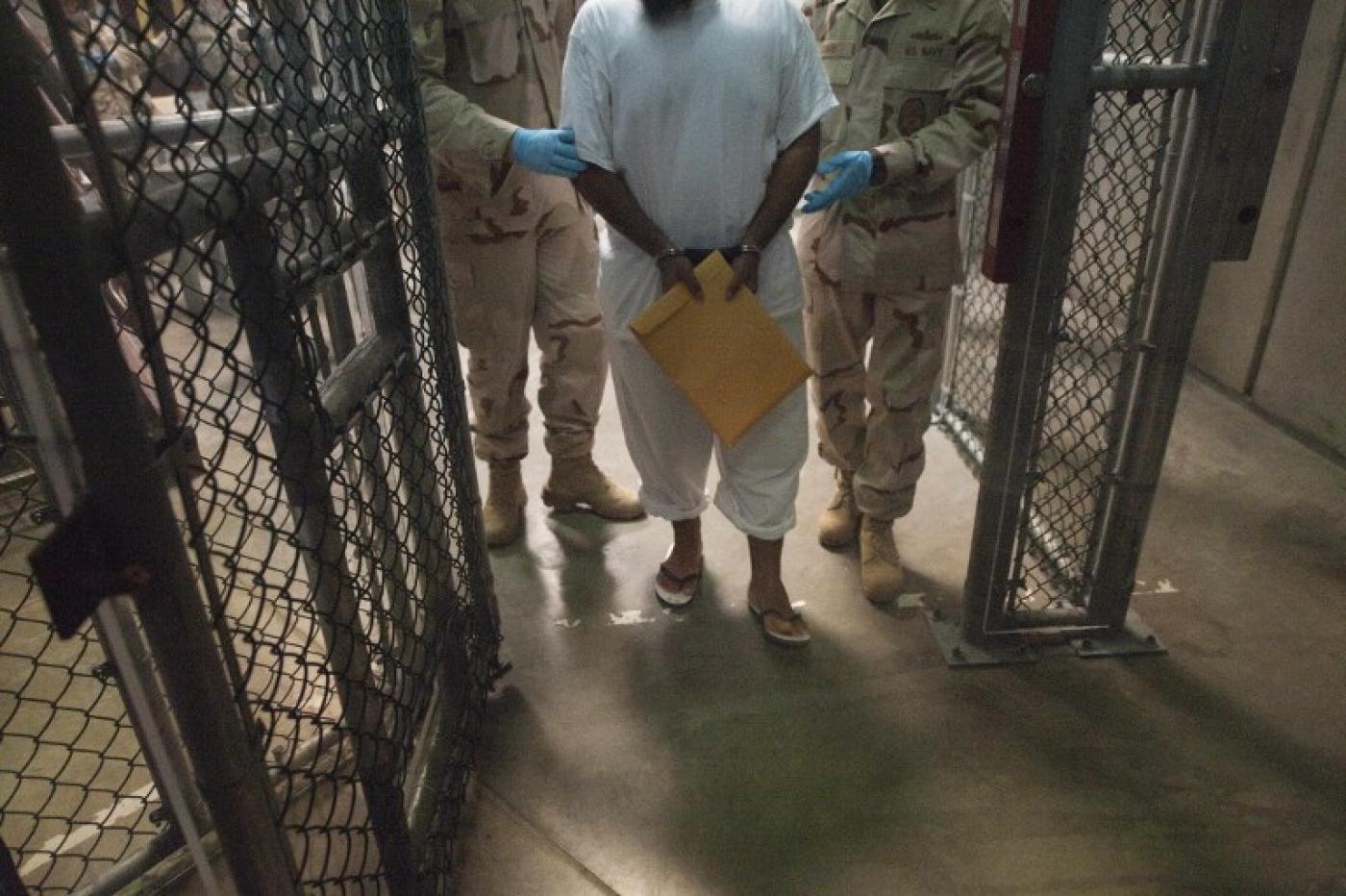 Today, 40 prisoners remain at Guantanamo Bay prison, only two of whom has been convicted of a crime (AFP/File photo)
By
Sheren Khalel
in
Washington, DC

Zayn al-Abidin Muhammad, better known as Abu Zubaydah, should soon find out whether he will be approved for release from Guantanamo Bay after spending nearly 14 years at the maximum-security prison without charge.

Born in the Palestinian territories and raised in Saudi Arabia, Muhammad was captured in 2002 in Pakistan and was one of the first detainees tortured under the CIA's so-called "enhanced interrogation" programme.

He has been subjected to waterboarding, sleep deprivation, forced nudity and confinement in a coffin-sized box, among other torture methods.

The CIA, along with then-President George W Bush, publicly claimed at the time of his capture that he was a top-level al-Qaeda leader with direct connections to Osama Bin Laden.

But in 2006, the CIA conceded that Muhammad was never a senior member of al-Qaeda because he was never a member of the armed group to begin with.

Still, his release has been repeatedly denied, as the 49-year-old lives out his days at Guantanamo. He is the only Palestinian held at the prison camp.

Guantanamo's controversial Periodic Review Board (PRB), a parole board-type panel, has in the past recommended Muhammad be prosecuted.

Various letters sent by his defence team over the years have also called for a trial to be held for Muhammad's prosecution, to no avail.

On Tuesday, the PRB convened once again to hear his case.

Middle East Eye followed the hearing at the Pentagon, where it was streamed to a television in a small room via CCTV. Phones and recording devices were barred.

Wearing a clean white t-shirt, Muhammad sat between two of his lawyers in complete silence during the hearing, his eye patch hanging loose around his neck as he periodically twisted his shortly-trimmed beard.

The parole board is solely there to determine if Muhammad is a threat to US security today, "not on the lawfulness of your detention", one official explained at the start of the hearing.

How the review board works

The PRB is made up of various civil servants representing six federal agencies: The Departments of State, Defense, Justice and Homeland Security, as well as the Office of the Director of National Intelligence (ODNI) and the Joint Chiefs of Staff.

To rule for release, all six agency representatives, whose names are classified, must agree unanimously.

Ahead of Tuesday's hearing, one of Muhammad's lawyers, Charles R Church, told MEE that he strongly objected to the ODNI having a place on the board, since the agency serves as the head of the US Intelligence Community, including the CIA. 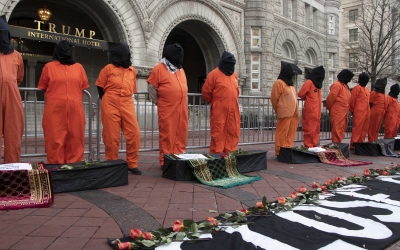 "While we understand that no CIA official will sit on the board, a member of the ODNI does, and we deem it probable that the CIA's views are both known to the ODNI and are quite likely to affect its input," Church said in an email.

Mark Denbeaux, another of Muhammad's lawyers made a similar statement during Tuesday's hearing before one official interrupted, highlighting that the ODNI does not represent the CIA.

But his lawyers are not convinced.

"We can hardly stay quiet if the CIA, through the ODNI, is allowed to influence the proceedings or play any role, direct or indirect, in determining their outcome," Church told MEE.

The review board itself has come under heavy criticism over the years, referred to as "a ratchet", "rigged" and "defunct" by some leading human rights groups focused on Guantanamo Bay's prison camp.

The government has argued that the existence of the review board is a form of due process consistent with law-of-war detention, but most human rights groups disagree.

In an amicus brief filed in a US federal court case against US President Donald Trump in May 2019, Human Rights First, a leading rights groups following Guantanamo, said the government's reliance on the review board is unacceptable and not at all consistent with requirements of due process.

"[The PRB] is inherently limited, deeply flawed, and, under the current administration, a dysfunctional process that only renders decisions in favour of continued detention," the group wrote in the court document.

Muhammad did not provide a personal statement on Tuesday, but at his last PBR hearing in 2016, in a written statement read aloud for him, he urged the board to release him, saying that he posed no threat.

Also read aloud during the 2016 hearing was a profile on him from the Department of Defense (DOD) stating that he "possibly had some advance knowledge" of attacks against the US in Kenya and Tanzania in the 90s and was "generally aware" of the 9/11 attacks before they took place and that he "possibly coordinated" training of two hijackers.

The DOD also said at the time that Muhammad had "shown a high level of cooperation with the staff at Guantanamo Bay".

"He has served as a cell block leader, assuming responsibility for communicating detainees' messages and grievances to the staff and maintaining order among the detainees," the statement reads. 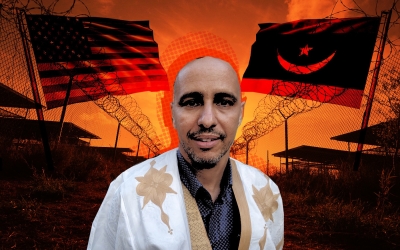 But unlike parole board hearings in the US's standard judicial system, where cooperation and leadership would be deemed qualities that help a prisoner's case, at Guantanamo the DOD said such behaviour was proof he remained a threat to US security.

"[He] has used his time in Guantanamo to hone his organisational skills, assess US custodial and debriefing practices, and solidify his reputation as a leader of his peers, all of which would help him should he choose to re-engage in terrorist activity," the DOD statement said.

A report released last year by Reprieve, a legal advocacy group based in London, found that the review board's policies had created a "rigged" system - particularly since it now depends on the Trump administration to follow through on the PRB's recommendations.

"[The PRB], as it currently operates, fails to meet any standards of independence and impartiality and instead acts as a conduit for decisions, which ultimately lie with the executive branch," Reprieve said in its 35-page report.

While the review board can make a suggestion, the ultimate decision for transfer lies with the US president - and Donald Trump himself has publicly said, "there should be no further releases" from Guantanamo.

Trump has worked to ensure just that by completely freezing the Obama-era mechanism that supervised discharging prisoners recommended for release by the PRB.

Of 779 people that have been held at Guantanamo since 2001, only 40 remain there today. Two people have been tried and convicted and seven have been charged, while another 26 - Muhammad's group - are the "forever prisoners" held indefinitely.

Five others have been cleared and ordered by the PRB to be released, but the board's decision came around the end of Obama's second term and was not finalised before Trump froze all discharges, leaving them stuck in limbo.

This means that even if the PRB were to order Muhammad's release, there would be no office to do the releasing, despite his 14-year imprisonment.

Waterboarding, Manson and a missing eye

According to the Senate Intelligence Committee’s 2014 report on the CIA's torture programme, Muhammad was one of the first prisoners to endure "enhanced interrogation techniques".

But before the CIA's initial torture of Muhammad at one of its "black sites" in Thailand began, the agency's interrogation team sought and obtained protection from their superiors in the form of a promise that Muhammad would spend "the remainder of his life" in isolation.

"Especially in light of the planned psychological pressure techniques to be implemented, we need to get reasonable assurances that Abu Zubaydah will remain in isolation and incommunicado for the remainder of his life," the interrogators requested in 2002, according to the Senate report.

Officers from the CIA's Bin Laden unit replied with assurances.

"There is a fairly unanimous sentiment within [headquarters] that Abu Zubaydah will never be placed in a situation where he has any significant contact with others and/or has the opportunity to be released... all major players are in concurrence that Abu Zubaydah should remain incommunicado for the remainder of his life," the officers said, as revealed in the Senate report. 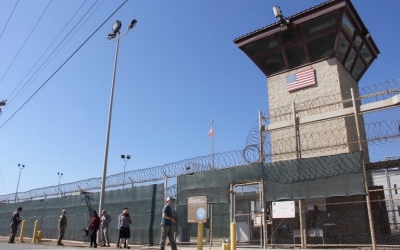 Bringing up those memos during Tuesday's hearing, Denbeaux accused the government of continuing to hold his client on those same grounds.

"[Muhammad] is being held incommunicado in order to conceal the truth about America's torture programme," Denbeaux told the board.

According to the intelligence report, Muhammad was waterboarded at least 83 times.

He was also stripped naked, deprived of sleep, slammed into walls and forced to endure music - such as Marilyn Manson songs - played at deafening volumes for weeks at a time, among other tactics. At one point his interrogators thought they might have killed him.

Wikileaks released an image of Muhammad in 2006 - four years after his capture - that showed him wearing a black eye patch over his left eye, revealing that he had lost it sometime during his custody.

How he lost his eye is unclear. The US government has not commented and his lawyers have been barred from repeating anything their client says to them on the grounds that any disclosures could threaten national security.

Brent Mickum, another of Muhammad’s attorneys, did tell the New Yorker in 2015 that even Muhammad did not know how he had lost his own eye. "But he'd like to know," Mickum said.

"He has some idea when [it happened]. But I can’t say because nothing that he tells me I can reveal to you, which is ridiculous. This is the game I have to play." 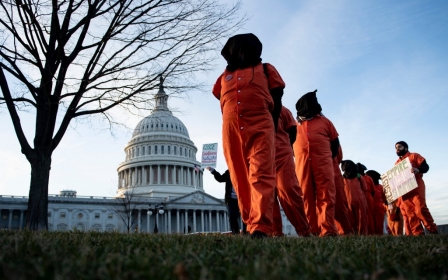 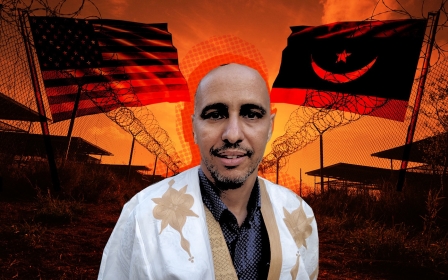 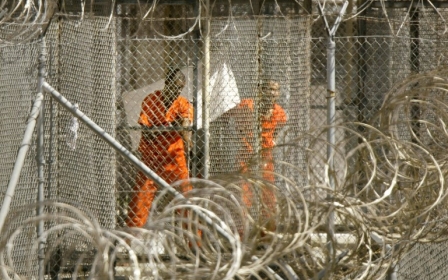