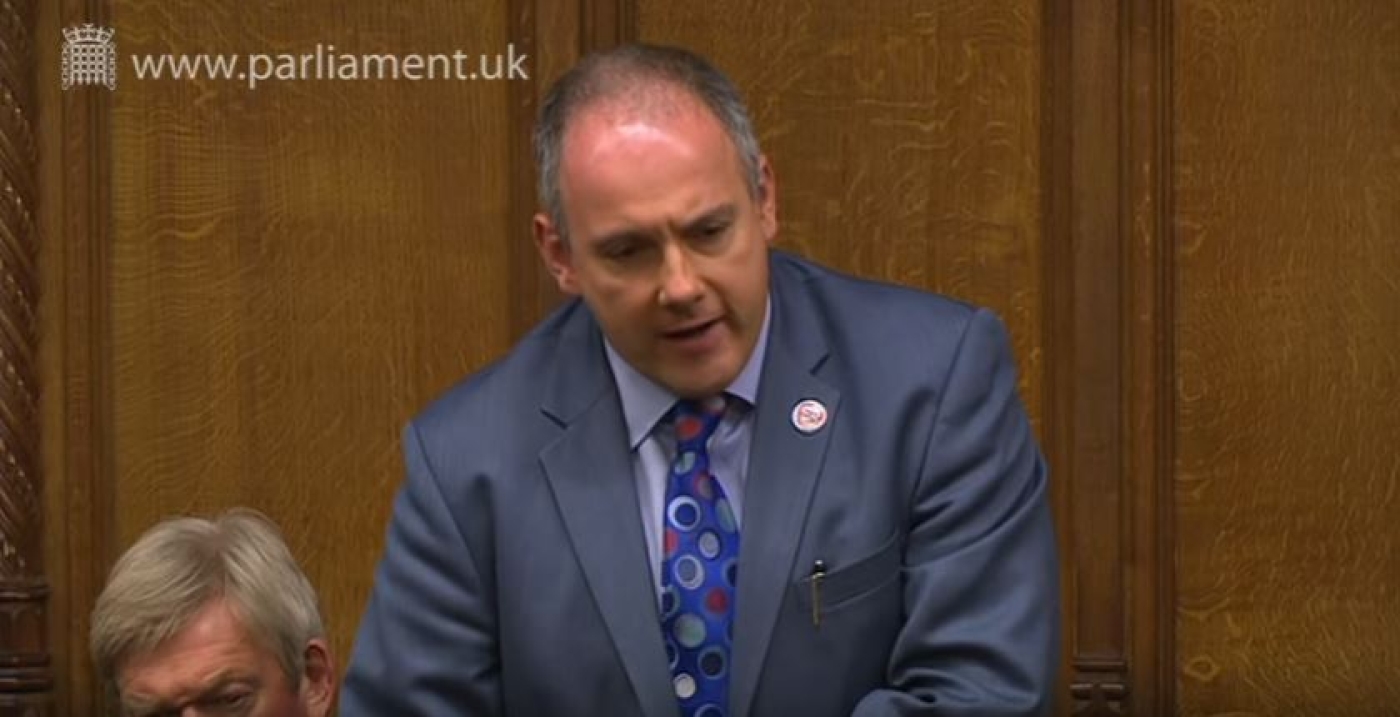 British government minister Robert Halfon has talked about Israel on 65 occasions in the House of Commons since he was elected as the member of parliament for Harlow in 2010, according to Hansard, the official parliamentary record.

In a secret recording by an undercover Al Jazeera reporter shared with Middle East Eye, Halfon's former parliamentary assistant, Maria Strizzolo, who had connections to the Israeli embassy in London and the Israeli Ministry of Strategic Affairs, revealed details of how she had used her position to place parliamentary statements sympathetic to Israel.

She claimed to have influenced Halfon, currently a junior education minister and a former Conservative Party deputy chairman, to ask a question concerning the abduction and killing of three Israeli teenagers in the occupied West Bank in July 2014.

Below is a selection of some of Halfon's other statements made in parliament in relation to Israel.

I must say that his hatred for Israel knows no bounds. He explains exactly why universal jurisdiction [Kaufman had opposed proposed changes to a law that had seen Israeli politicians threatened with arrest over suspected war crimes if they visited the UK] needs to be changed - it is being used as a political football by people such as him who have hidden agendas. (13 December 2010)

The objective of extreme Islamists is not a peaceful resolution to the Middle East situation, but jihad; it is an ideology that believes that Israel and, by extension, Jews should be wiped off the map. [Then-Iranian] President Ahmadinejad makes no local distinction between the West Bank and Tel Aviv. It is the catch-all Zionist entity that must be destroyed…

The poison of extreme Islamism is not something that can be talked into submission or bubble-wrapped in bureaucracy. Its imams are preaching the most ideological and embittered form of anti-Semitism in the UK. The fundamental right of Israel to exist and of Jewish families to live in peace should not be a matter for debate.  (20 January 2011)

On Israel as a 'bulwark of freedom'

Our current policy towards Israel should be much more supportive. Criticism of Israel is out of all proportion to that of other countries. It is always incredible how everyone wants to be a candid friend of Israel but no one is a candid friend of France, Germany or America. Yes, of course Israel is imperfect, and yes, there are problems with settlements, but the fact is that in a region of dictators, Israel is a bulwark of freedom. The excuse is often given that Israel-Palestine is the driving force behind all conflict in the Middle East, but recent events have disproved that.

I believe that peace would happen incredibly quickly in Israel with two states - a Palestinian state and an Israeli state - if Arabist dictators stopped funding terrorism. The more democratic these countries become, the less likely there is to be a war. I do not think there is an example in history of two democracies that have fought each other. I have often met Palestinian moderates who have the will to make peace, but not the authority, whereas Hamas, sadly, has the authority but not the will.  (17 March 2011)

Does the honourable gentleman recognise that far from being a wall, what he is describing is a fence, a tiny proportion of which is wall? Does he recognise that the reason it was built in the first place was to prevent suicide bombers from coming into Israel on a daily basis? That is something that it fortunately has achieved. (26 March 2012, addressed to Labour MP Alex Cunningham)

On Iran as the 'Soviet Union of the Middle East'

Many people regard Iran as the Soviet Union of the Middle East, because it practises repression at home, it exports terrorism abroad and it says it wants to wipe Israel off the map. How will my right honourable friend judge whether this is genuine perestroika and glasnost or whether it is deception by Iran, and what steps can he take to ensure that over the six months it not only stops work on nuclear enrichment, but stops supporting Hamas, Hezbollah and the Assad regime? (25 November 2013 addressed to then-foreign secretary William Hague)

On the effectiveness of Israel's Iron Dome missile defence system

Are we not in a crazy situation where Israel is being criticised for defending itself too well, because the Iron Dome is stopping many of the missiles and preventing many thousands of Israeli citizens from being killed?  (17 July 2014)

On parallels between Hamas and IS

I thank my right honourable friend for his statement that Israel was right to defend itself against the missile barrage from Hamas. Does he agree that the difference between Hamas and ISIS is one of degrees? Does he also agree that Iran remains a serious security threat and that our enemy's enemy is not our friend? (1 September 2014, addressed to Prime Minister David Cameron)

On Jordan as a 'Palestinian state'

I agree that there should be a Palestinian state. In fact, not many realise that there is already a Palestinian state called Jordan. It was created by the British in 1921 and was originally called Transjordan. After the 1948-49 war against the newly created state of Israel, the Jordanian monarch, Abdullah, even called himself the King of Jordan and Palestine, as his country controlled the West Bank.

The vast majority of Arabs currently in Jordan are in fact Palestinians ruled by a monarch from the Hashemite minority. Before the 1967 Six Day War when Israel defeated the Arab invasion and took control of the West Bank and Gaza, which had been under the arm of Egypt, there had never been demands from Palestinians in the disputed territories for a second Palestinian state, as they were under Jordanian rule.

On 'taking out' Hamas

Hamas is Hamas is Hamas: it is a terrorist organisation whether it is part of the so-called [Palestinian] unity government or not… Surely it is now time to cut off relations with the Government given that they are co-opted with a terrorist organisation. Does my right honourable friend agree that, far from showing restraint, the British Government should give Israel every possible assistance to take out the Hamas terrorist network so that that country can be sure that her children will be secure in the future? (1 July 2014, addressed to then-foreign office minister Hugh Robertson)