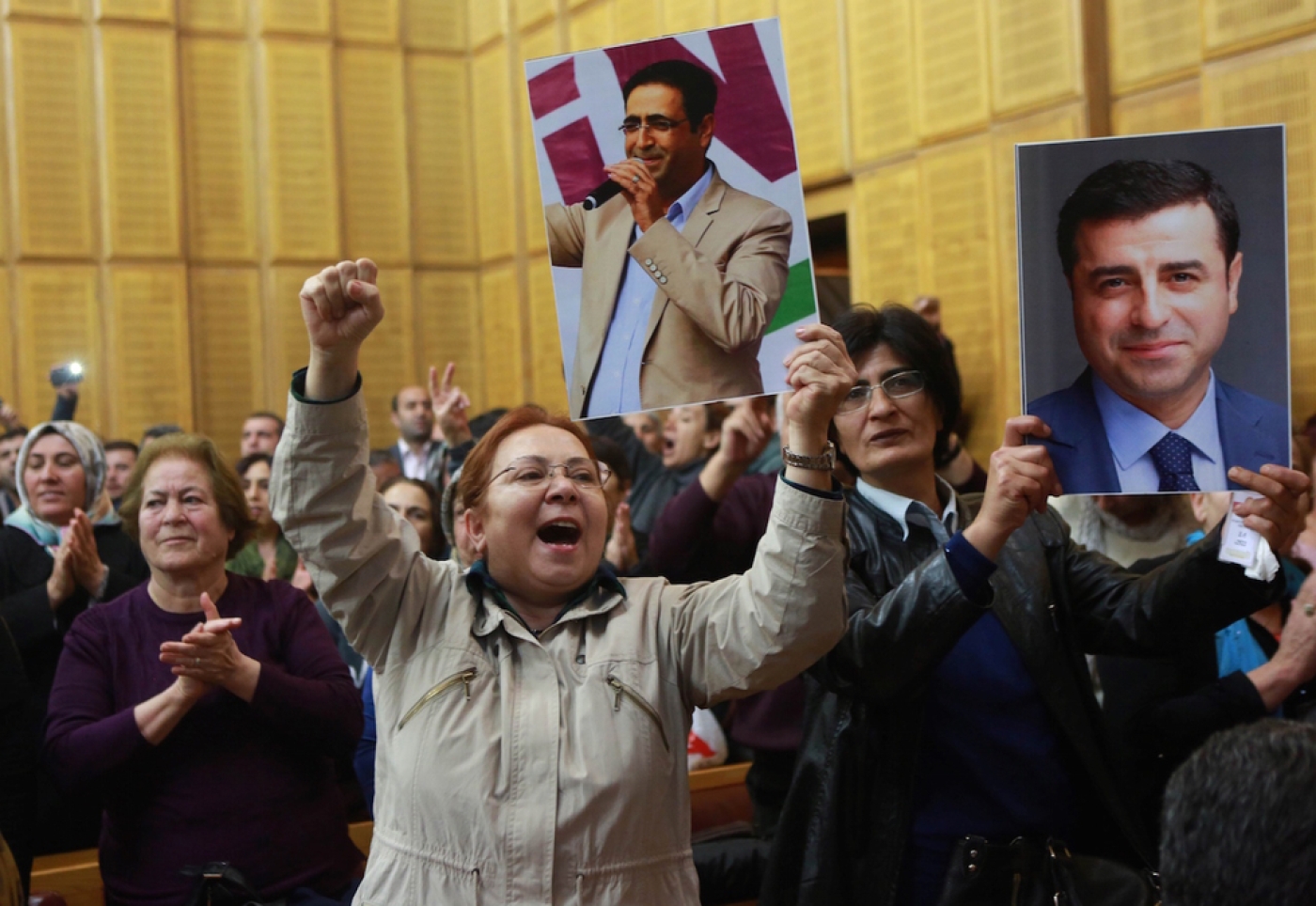 The imprisoned co-leader of the pro-Kurdish People's Democracy Party (HDP) in Turkey began a hunger strike on Friday to protest the “inhumane treatment" of detainees.

Selahattin Demirtas, along with fellow HDP MP Abdullah Zeydan, began the hunger strike in their prison in the northwestern province of Edirne, where they are currently awaiting trial for having links to the outlawed Kurdistan Workers Party (PKK).

"Whether ordinary or political, all arrestees and prisoners have the right to humane treatment in detention," Demirtas said in a statement on Friday.

"We want to draw attention to the unlawful, inhumane and arbitrary practices taking place in prisons in Turkey. It is because of these issues that there are a series of hunger strikes continuing for over 40 days in many prisons across Turkey."

In the statement, Demirtas emphasised he had no "personal demands" from the hunger strike.

"We are on hunger strike to draw attention to the widespread hunger strikes and problems in prisons, to remind the Ministry of Justice of its responsibility and in particular, to protest the arbitrary practices of the Edirne prison director."

The prosecutor has levelled 12 charges against the politician, including leadership of a terrorist organisation, spreading terrorist propaganda and incitement.

He is demanding up to 143 years in prison.

Thirteen HDP lawmakers, including ethnic Turk co-chair Figen Yuksekdag, are currently facing hundreds of years in prison due to alleged links with the PKK.

Besime Konca, HDP MP for Siirt, has already been on hunger strike for seven days.

The Party of European Socialists, a group of centre-left parties in the European parliament, tweeted their support for Demirtas:

All our support to @HDPgenelmerkezi Co-Chair, Selahattin #Demirtaş, and MP Zeydan, on hunger strike to protest about their incarceration!! https://t.co/ZDhD0oqoW9

More than 41,000 people in Turkey have been arrested since a failed coup attempt in July, as well as 100,000 fired or suspended from their jobs. Many of them are teachers, police, magistrates and journalists.

Amnesty International said in July 2016 they had evidence that detainees were being subjected to "beatings, torture and rape" and that Turkish police in Ankara had been "holding detainees in stress positions for up to 48 hours, denying them food, water and medical treatment, and verbally abusing and threatening them."

Ertugrul Kurkcu, a veteran leftist and the HDP's honorary president, told Middle East Eye that Demirtas was joining an on-going hunger strike which had already lasted for 40 days and allegedly includes more than 100 people.

"Demirtas joined this hunger strike from his position in the prison," he said by phone. "In the last two weeks he was cut from communication with the prison administration and he was unable to convey his demands."

He said that the hunger strikers were calling for an end to their mistreatment in the prisons, but also reiterating their demand for an end to the isolation of Abdullah Ocalan, the founder of the PKK and figurehead for the Kurdish liberation movement, who has been imprisoned on Imrali island since 1999.

Though a highly controversial figure in Turkey for leading a bloody insurgency, Ocalan has been seen by many as key to restarting the peace talks between the Turkish state and the PKK, which collapsed in 2015 leading to an upsurge of violence in the country's southeast.

Kurkcu said that hunger strikes had been an effective tool in past.

"Serious and persistent hunger strikes in Turkey, according to our long history, have proved successful," he explained. "There are sad cases also."

"After the 15th day there is the health situation of the strikers and they start rapidly deteriorating - it is approaching this point for some of the strikers in the prisons."

The HDP have been staunch supporters of the "No" vote in the upcoming referendum to change the Turkish constitution on 16 April, which critics say is designed to hand unprecedented powers to Turkish President Recep Tayyip Erdogan.

But the group and its supporters have faced repeated obstacles while trying to campaign for their camp.

On Wednesday, the provincial governor of Sirnak, a Kurdish-majority province in the southeast, issued an order banning the Kurdish-language version of the HDP's campaign song "Say No" arguing that it could incite "public hate":

On 16 March, Berdan Ozturk and Mehmet Emin Adiyaman, HDP MPs, were arrested during a demonstration in favour of the No campaign.

They were taken for questioning to the Ardahan courthouse and later released.

According to a spokesperson for the party, 122 HDP executives and members were also detained in a number of cities including Istanbul, Antalya, Bursa, Gaziantep and Van.