Mechichi, former legal adviser to President Kais Saied, replaces Elyes Fakhfakh, who quit after a no-confidence motion in his leadership Hichem Mechichi has been appointed as Tunisia's PM designate in order to form the country's next government, the president's office announced on Saturday.

The 46-year-old lawyer, who had been serving as the country's interior minister, succeeds Elyes Fakhfakh, who resigned earlier this month after a group of 105 lawmakers filed a no-confidence motion in his leadership. Mechichi had not been one of the names proposed to President Kais Saied by the ruling political parties.

As well as being the interior minister in the outgoing government, Mechichi had been a counsellor to Saied, handling legal matters. He had previously been chief of staff at the transport ministry and also served in the social affairs ministry.

Mechichi pledged to respond to the social and economic demands that have spawned constant protests in the North African country.

"I will work to form a government that meets the aspirations of all Tunisians and to respond to their legitimate demands," Mechichi said.

Mechichi now has a month to form a government against a background of political tensions among the major parties. At that point his choice would be put to a parliamentary vote of confidence and would need an absolute majority to succeed. Failing that, parliament would be dissolved and new elections organised within three months.

In the last elections, held in October, the Islamist-inspired Ennahdha came top but fell far short of a majority - holding 54 of 217 seats in parliament - and eventually agreed to join a coalition government.

Last month, an independent member of parliament published documents indicating that Fakhfakh owned shares in companies that had secured deals from the state worth $15m.

Fakhfakh denied doing anything improper or corrupt, and promised to step down if investigators were to find any wrongdoing.

Fakhfakh had been appointed prime minister-designate by Saied at the end of January, becoming Tunisia's eighth PM since the 2011 revolution that ousted former president Zine El Abidine Ben Ali.

His resignation on 15 July, after less than five months in office, threatened fresh political deadlock in the North African nation as it struggled with the economic fallout from the coronavirus pandemic. 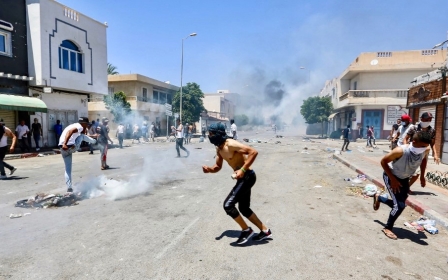