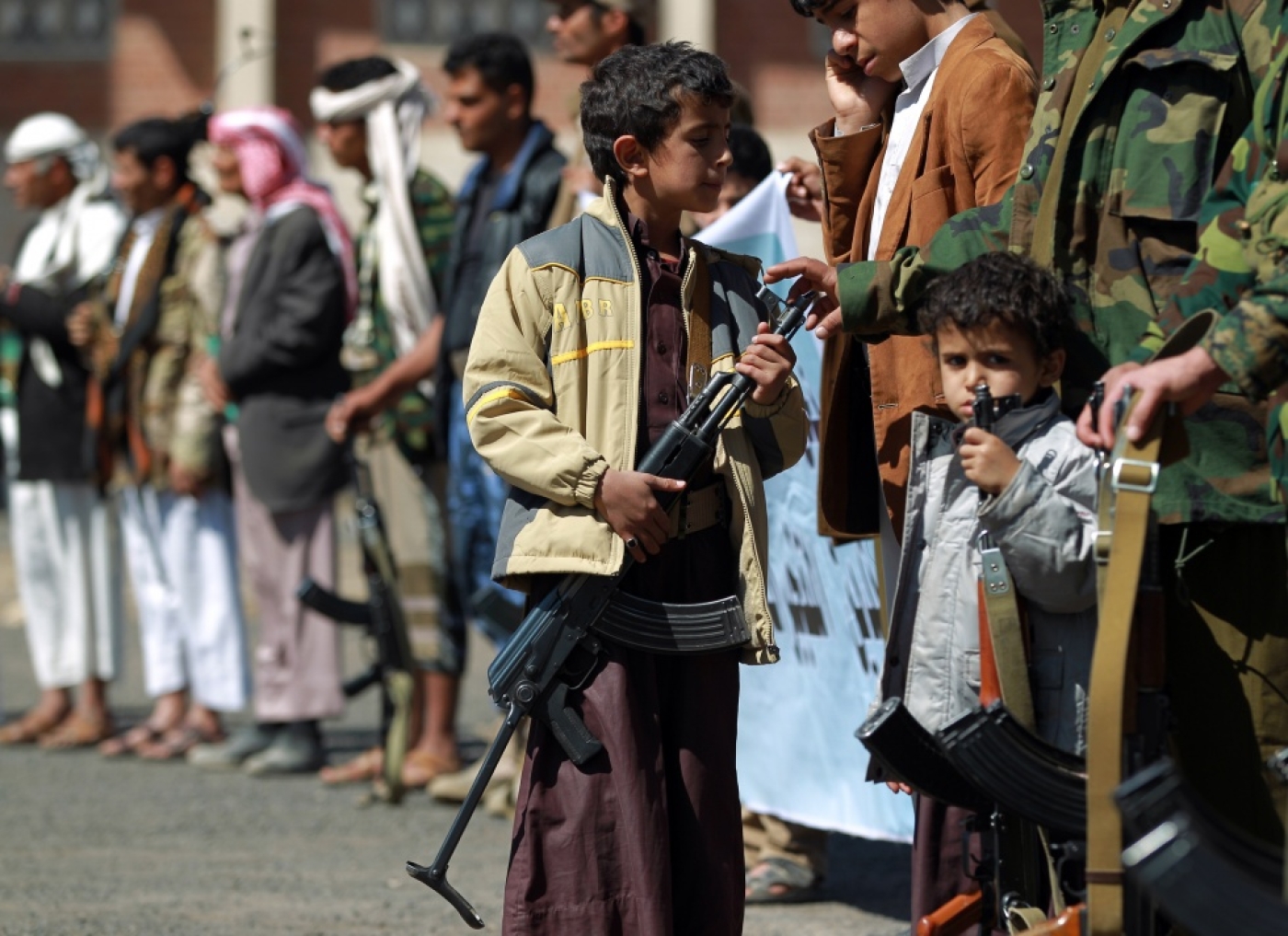 Yemeni children hold automatic rifles as they join grown up relatives in a tribal gathering organised by the Shiite Houthi movement in Sanaa on 4 February, 2015 (AFP)
By
MEE and agencies

Yemen's Shiite Houthi militia dissolved parliament Friday and set up a "presidential council" to fill a power vacuum, sparking angry protests against what demonstrators and tribes called a "coup".

The militia, which controls Sanaa, said it would set up a 551-member national council to replace the legislature in the violence-wracked country.

A five-member presidential council will form a transitional government for two years, the Houthis announced in a "constitutional declaration" which also mentioned a "revolutionary council" to "defend the nation".

Sunni tribes in the eastern, oil-rich province of Marib cried foul and hundreds of people took to the streets of Sanaa in protest.

"We reject the authors of this coup in Sanaa," a spokesman for the influential Marib tribes, Sheikh Saleh al-Anjaf, told AFP.

Youth activists, who played a key role in the 2011 uprising that forced out veteran president Ali Abdullah Saleh, released a statement saying they "reject the hegemony of the Houthi militia".

Hundreds of people protested around Sanaa university to denounce the Houthis, but the militiamen fired into the air to disperse them and arrested six people – including two journalists, witnesses said.

Protests also erupted in the western city of Hudeida and in Aden, Yemen's second city in the south where the governor, Abdel Aziz bin Habtur, called the Houthi declaration "a plot against the constitution".

The UN Security Council raised the prospect of possible sanctions on Friday.

Security Council President Liu Jieyi said the body's 15 members were ready to "to take further steps" if negotiations to halt the unrest were not resumed "immediately."

The council "called in the strongest terms for all parties, in particular the Huthis, to abide by the GCC initiative and the national dialogue conference," a statement said, referring to an initiative brokered by the Gulf Cooperation Council aimed at solving Yemen's political crisis.

The Security Council called for the immediate release of President Abdrabuh Mansur Hadi and members of his government from house arrest.

Yemeni female activist and Nobel Peace prize laureate Tawakkol Karman said the declaration was "null and void" and expected the people to rise against the Houthi "coup and liberate the capital which they occupy".

Yemen's Revolution Youth Council on Friday expressed its rejection of the "constitutional declaration" issued by the Shiite Houthi movement, describing it as a "usurpation of power."

The Revolution Youth Council was established in 2013 by Karman. It includes many of Yemen's intellectuals and youth activists, several of whom played prominent roles in the country's 2011 popular uprising.

The Houthi's constitutional declaration, the council said in a statement, represented a "usurpation of power and an affront to the right of the Yemeni people to choose their ruler."

The youth council urged Yemenis to "unite against Houthi anarchy and oppose the dominance of Houthi militias, which are adamant about implementing their narrow, arrogant plans to alter the country's political identity."

Yemen's Arab Socialist Baath Party also rejected the Houthis' declaration, describing it as a "coup against the government and all regional and international agreements and protocols."

And while Yemen's Nasserist Unionist People's Organization did not declare an official position, it did call for an urgent meeting to "stand against the [Houthis'] constitutional declaration and forge a final position on it."

The heavily armed Houthis swept into Sanaa from their northern stronghold in September, seeking greater influence in running the country.

The Houthi declaration bore the signature of Mohammad Ali al-Houthi, a relative of militia chief Abdel Malek al-Houthi described as "the president of the revolutionary council".

The Houthi revolutionary council is based in the Saada province, northern Yemen, and answers directly to Houthi leader Abdul Malik al-Houthi.

Turkey called on its nationals in Yemen to evacuate the country, but it's not clear yet how many other states would follow suit.

US did not brand Houthi takeover as 'coup'

The White House said that it is "deeply concerned" following the overthrow of the elected parliament, but it did not brand the Houthi takeover a coup, adding that US counter-terrorism operations against al-Qaeda have not stopped.

A senior American official said on Friday that the US is opposed to the militia's creation of a 'presidential council' in Yemen.

Some speculate that the apparent takeover of power by the Houthi militia, seen by many as a coup, could have huge ramifications for Yemen’s economy.

If the US publicly recognises the Houthi takeover as a coup, it will be forced to cut aid to Yemen, due to a Foreign Assistance Act that prevents Washington from sending aid to “any country whose duly elected head of government is deposed by military coup or decree”.

The US has pledged over $74 million in humanitarian aid to Yemen in 2015, as well as over $102 million in military and police aid, according to figures compiled by the US-based Security Assistance Monitor.

The Pentagon had previously said US officials were holding discussions with representatives of the militia but were not sharing intelligence.

"Given the political uncertainty, it's fair to say that US government officials are in communication with various parties in Yemen about what is a very fluid and complex political situation," said Pentagon spokesman Rear Admiral John Kirby.

US President Barack Obama vowed on January 25 not to let-up in Washington's campaign against Al-Qaeda in the Arabian Peninsula (AQAP).

Obama said Washington would continue "to go after high value targets inside Yemen".

AQAP said Thursday that four of its members had died in an American drone strike in Yemen, accusing the Houthi militia of becoming "faithful US partners".

The Wall Street Journal recently reported that US officials were in touch with Houthi fighters largely through intermediaries.

"We have to take pains not to end up inflaming the situation by inadvertently firing on Houthi fighters," a senior US official told the Journal.

"They’re not our military objective. It’s AQAP and we have to stay focused on that."

Yemen has been riven by instability since the uprising that forced autocratic president Ali Abdullah Saleh from power in 2012.

Saleh has been accused of backing the Houthis, as has Shiite-dominated Iran. Inside Yemen
AQAP says Houthi militia are 'faithful US partners'