As Saudi and Emirati-backed forces begin assault of key port city, Houthis send reinforcements from across Yemen in preparation for confrontation TAIZ, Yemen - Forces backed by Saudi Arabia and the United Arab Emirates began an offensive on the Yemeni port city of Hodeidah early on Wednesday, despite warnings from Western governments and international aid groups about the catastrophic effect the battle could have on humanitarian conditions in the country.

According to reports in Iran, an Emirati warship was hit by the defending Houthi forces, with another battleship pulling out of the fray as a result.

The Houthis said they had a repelled a sea landing near the port by forces from Saudi Arabia and the UAE. "The Saudi coalition has not advanced at all in Hodeidah," Dayfallah al-Shami, a member of the movement's political bureau, told the Lebanese TV channel al-Mayadeen.

Field commanders announced the beginning of the ground assault, after reinforcements swelled the ranks of pro-government fighting groups around Hodeidah.

As of Wednesday afternoon, pro-Hadi forces had advanced to around five kilometres of al-Hodeidah's airport and clashes were ongoing between Houthis and pro-Hadi forces.

The Houthis have sent fighters and vehicles from various parts of Yemen to reinforce their positions and are prepared to confront any attempts by coalition forces as they advance towards the city, pro-Houthi political analyst Mohammed al-Dailami told Middle East Eye.

"Hodeidah is a main front and it is the only port to Yemenis, so there is no way that [the Houthis] will abandon Hodeidah," Dailami said on Wednesday.

The operation, known as "Golden Victory", is being led by Tareq Saleh, nephew of former president Ali Abdullah Saleh, who was killed by the Houthis after turning on them. 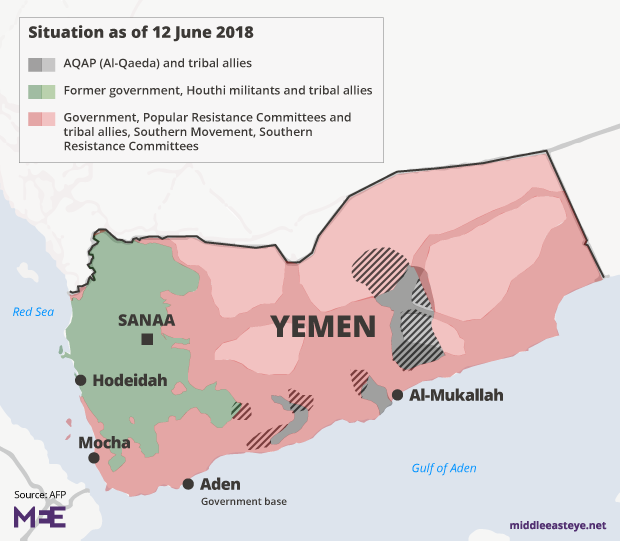 "Some civilians are entrapped, others forced from their homes. We thought it could not get any worse, but unfortunately we were wrong," Care's acting country director, Jolien Veldwijk, said.

We hardly eke out for our families, and instead of providing us with food, warring sides will bring the battles to the middle of the city. I am an illiterate man but I am aware that this is stupid behaviour by warring sides

Bassim al-Jenani, a Yemeni journalist following the offensive in his native Hodeidah closely despite being currently in Egypt, said air strikes had not stopped since the morning, and many have hit areas on the coastal strip.

"There is an atmosphere of danger and intense fear in these areas where the coalition are clearing out enemy combatants, especially the areas of al-Shajayra and Nakhayla," Jenani told MEE. "The people are still in their homes and people can’t leave the Durayhimi district centre. The atmosphere is one of terror."

The UAE, one of the main members of the coalition backing the government of Abd Rabbuh Mansour Hadi, had set a Tuesday deadline for the Houthi rebels to withdraw from the city under UN-led negotiations or face an assault.

Hadi's government said in a statement reported by Saudi media on Wednesday that all political and peaceful approaches to drive the Houthis out of Hodeidah had been exhausted.

It added that recapturing the port city would be the beginning for "liberating" all of Yemen from rebels, including the capital, Sanaa.

The embattled Yemeni president visited the UAE in a rare move on Tuesday.

Residents who can afford to have prepared to flee the city or have already done so.

Ahmed al-Absi, an employee in a private water station and father of five, said that he had cancelled plans to celebrate the end of Ramadan as a result of the operation.

"Safety is more important than anything else, so instead of preparing to receive Eid, residents are preparing very well to save themselves from the coming battles in the city," he told Middle East Eye.

"Some residents decided to live in the basements of their houses, others have already fled Hodeidah, but for me I will travel to Sanaa in the coming days, as I believe this is the best solution to save my family."

Others in the deeply impoverished province are not so fortunate.

One street vendor, named Abdul Mageed al-Raimi, said he feared air strikes would target camps housing displaced residents and that, regardless, he did not have money to flee the city.

"If I flee the city to camps, I will be a target of air strikes, so I will stay at my house and God will protect me and all needy people from the battles," Raimi told MEE.

"We hardly eke out for our families, and instead of providing us with food, warring sides will bring the battles to the middle of the city. I am an illiterate man but I am aware that this is stupid behaviour by warring sides."

Jenani, the Yemeni journalist in Egypt, said residents of Hodeidah were scared at the prospect of a protracted battle in which "air strikes and battles would destroy the port, which is the backbone of Hodeidah as well as a lot of the districts in the north."

"The Houthis have gathered a large number of their fighters in the city and on the outskirts," he added. "They’ve brought in armoured vehicles and tanks into the city. At this moment they’ve dug up trenches and scattered landmines at the entrance of the coastal city."

The United Nations - which has been evacuating staff this week - had warned that an attack on the densely populated city could have catastrophic humanitarian consequences, as its security council is set to meet on Thursday to discuss the situation in Hodeidah, marking the second time this week that the top UN body has held talks on the crisis in Yemen.

"A military attack or siege on Hodeidah will impact hundreds of thousands of innocent civilians," the UN humanitarian coordinator in the country, Lise Grande, said in a statement on Friday.

"In a prolonged worst case, we fear that as many as 250,000 people may lose everything - even their lives."

Washington had also cautioned against the assault.

Last week, a spokesperson for the White House National Security Council said the US opposed any effort by the Emirates and Yemeni troops it backs to seize the city.

"The United States has been clear and consistent that we will not support actions that destroy key infrastructure or that are likely to exacerbate the dire humanitarian situation that has expanded in this stalemated conflict," said the spokesperson, who was not authorised to speak publicly about the matter and asked not to be named.

More than 10,000 people have been killed since Saudi Arabia led a bombing campaign against the Houthis. The conflict has also caused a cholera outbreak and brought the already impoverished nation to the verge of famine.

On Monday, the UN Security Council voiced support for diplomatic efforts to avert the attack on Hodeidah.

UN aid chief Mark Lowcock, who also briefed the council, said an attack on Hodeidah would be "catastrophic" and that aid agencies were hoping to "stay and deliver" in Yemen, which the UN describes as the world's worst humanitarian crisis.

Yemen relies on imports for 90 percent of its food, and 70 percent of those transit through Hodeidah, Lowcock said.

Eleven humanitarian aid agencies, including Oxfam and Save the Children, separately wrote to British Foreign Secretary Boris Johnson earlier this week urging him to warn the coalition that it will lose British support if it attacks Hodeidah.

"If an attack does take place, casualties on all sides will be high, with a likely catastrophic impact on the civilian population," they wrote.

The UAE's minister of state for foreign affairs, Anwar Gargash, told the Houthis on Tuesday that the "final hour" was approaching in Hodeidah.

"If the current situation continues we will have a stalemate politically," he said. "The last thing we want is to prolong the war in Yemen."

Abu Dhabi's critics say the UAE military operations have focused on port cities to control commerce in the strategic region, not to drive out the Houthis. 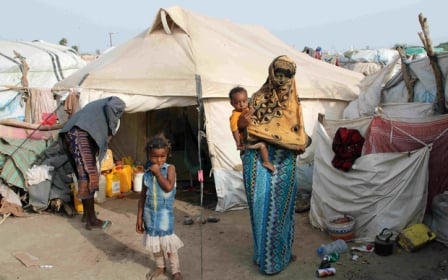