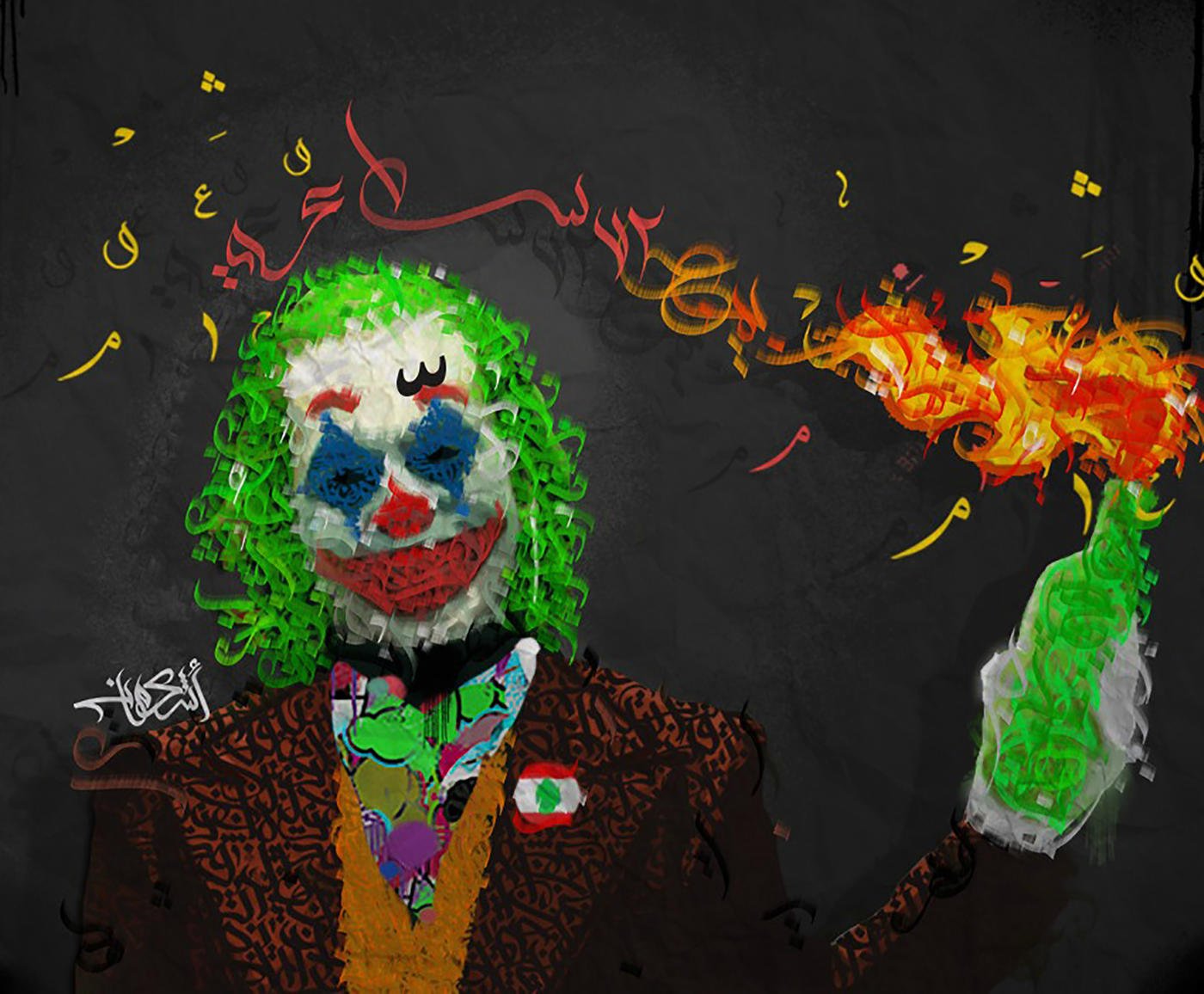 "The Joker" holds a Molotov cocktail, with the Arabic words "72 hours" scribbled across the illustration in reference to Prime Minister Hariri's address earlier (AFP/Graffiti artist group Ashekman)
By
MEE and agencies

Thousands of demonstrators poured into Lebanon's streets on Saturday for a third day of anti-government protests, directing growing rage at a political elite they blame for driving the country to the economic brink and driving a Christian party to leave the government.

The head of the Maronite Christian Lebanese Forces party Samir Geagea said he asked his party's ministers to resign from the government on Saturday, piling further pressure on Prime Minister Saad al-Hariri. In a speech broadcast on Al Jadeed TV, Geagea said his party, which includes four ministers, concluded that the government was unable to resolve the country's economic crisis and was calling for a new government to be formed.

From the south to the east and north, protesters blocked roads, burned tyres and marched through the streets to keep the momentum going despite gunmen loyal to the Amal movement appearing with heavy guns to scare them away.

In central Beirut, the mood was fiery and festive with protesters of all ages waving flags and chanting for revolution outside upmarket retailers and banks that had had their storefronts smashed in by some rioters the night before.

"This country is moving towards total collapse. This regime has failed to lead Lebanon and it must be toppled and replaced," said Mohammad Awada, 32, who is unemployed.

"We no longer feel we have a state. This state tramples on all institutions."

Crowds had begun gathering in front of the seat of government in the capital Beirut around lunchtime, with many waving billowing Lebanese flags.

Earlier, troops reopened some major highways that had been blocked by protesters after firing tear gas and water cannons to disperse the huge crowd that had gathered into the early hours in Riyadh al-Solh Square in the heart of Beirut.

The protesters are demanding a sweeping overhaul of Lebanon's political system, citing grievances ranging from austerity measures to poor infrastructure.

Hariri has given his deeply divided coalition partners 72 hours, until Monday evening, to give their backing to a reform package aimed at shoring up the government's finances and securing the disbursement of desperately needed economic assistance from donors.

The demonstrations first erupted on Thursday, sparked by a proposed 20 cent tax on calls via messaging apps such as WhatsApp.

Such calls are the main method of communication for many Lebanese and despite the government's swift abandonment of the tax, the demonstrations quickly swelled into the largest in years.

Hezbollah leader Sayyed Hassan Nasrallah said on Saturday that the group was not demanding the government's resignation amid the widespread protests.

Nasrallah said in a televised speech that he supported the government, but he called for a new agenda and "new spirit", adding that the ongoing protests showed the way forward was not new taxes.

Any tax imposed on the poor would push him to call supporters to take to the streets, Nasrallah added.

'We are demanding our rights'

Groups of young people gathered on the streets of the capital during Saturday morning, preparing for a new day of protests despite the crackdown.

The youths collected tyres and other material with which to throw up improvised roadblocks, correspondents for the AFP news agency reported.

Parts of central Beirut looked like a war zone, littered with broken glass, overturned litter bins and the remains of burning tyres. Banks and many restaurants and shops remained closed.

Thousands of people of all ages, religions and political affiliations brought the capital to a standstill on Friday, with demonstrations reported across the country.

Minor clashes continued through the night pitting groups of young men against the army, an AFP reporter said.

One protester in the southern city of Nabatieh, a Hezbollah stronghold, vowed to defy the crackdown.

"They are trying to portray us as a mob, but we are demanding our rights," he told a local television channel. "We are used to repression."

Lebanon has one of the highest public debt burdens in the world, and the government is trying to reach an agreement on a package of belt-tightening measures to cap the deficit in next year's budget.

The promised austerity moves are essential if Lebanon is to unlock $11bn in economic assistance pledged by international donors last year.

Growth has plummeted in recent years, with political deadlock compounded by the impact of eight years of war in neighbouring Syria.

Lebanon's public debt stands at around $86bn - more than 150 percent of gross domestic product -according to the finance ministry.

The International Monetary Fund projected on Thursday that growth would remain weak in the coming months.