'I am being arrested': Egyptian blogger blindfolded and dragged away in night

Wael Abbas, who exposed police brutality in Egypt, has become the latest target in crackdown on critical voices A prominent Egyptian blogger known for his work exposing police brutality announced his own arrest on social media before armed Egyptian forces took him away blindfolded at dawn on Wednesday.

“I am being arrested,” Wael Abbas posted on Facebook at 4.20am as he became the latest Egyptian activist swept up by a wave of arrests in recent weeks.

Heavily armed police stormed Abbas’ home without giving reason, blindfolded him and took him in the clothes he was sleeping in to an unknown location, the Egyptian rights group Arab Network for Human Rights Information (ANHRI) said in a statement.

I am hearing that friend and well-known activist Wael Abbas has been arrested. A mutual friend says security forces broke into Wael’s home in #Cairo, blindfolded him and arrested him. #Egypt

The group, which said it will be providing Abbas’ legal defence, said lawyers had not been allowed to visit him.

“As usual, the police forces threw the constitution and the law against the wall,” the statement said, warning that pro-state “yellow press” would inevitably publish accusations against Abbas.

Abbas was banned from Twitter last year, which Egyptian official newspaper al-Ahram reported was for “intention to incite violence”, while his YouTube account was taken down in 2007.

ANHRI also noted that his arrest resembled that of Shadi Abu Zeid, who uploaded satirical videos to YouTube and was arrested from his home earlier in May.

After Zeid’s arrest, press freedom watchdog Reporters Without Borders called on Egyptian authorities “not to confuse disrespect with terrorism.”

“By reining in the traditional media and blocking access to independent online media, the Egyptian authorities have reduced the country to almost complete silence,” the watchdog said in a statement that also named Abbas as an activist who had been targeted online.

Abbas was the fourth high-profile Egyptian blogger or social media activist arrested since April while an Egyptian court also sentenced a journalist working in the Sinai province to 10 years imprisonment.

Ismail Alexandrani, an expert on militant groups in the Sinai, was accused of publishing state secrets and belonging to the banned Muslim Brotherhood. 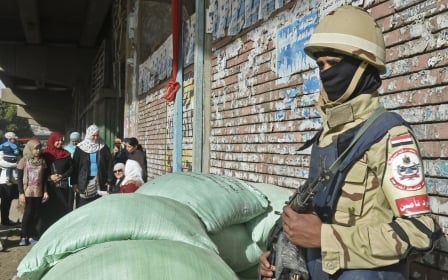