'If he shouted it at a Muslim woman in Wal-Mart he'd be arrested': Trump slammed over racist rant

In comments directed at congresswomen including Ilhan Omar and Rashida Tlaib, US president says they should 'go back' to countries they came from Ilhan Omar, pictured during a Congress committee meeting in March 2019 (AFP)
By
MEE and agencies

US President Donald Trump has been called a racist and a xenophobe after tweeting comments aimed at a group of Democratic congresswomen from immigrant backgrounds including Ilhan Omar and Rashida Tlaib in which he suggested that they should "go back" to the countries they had come from.

Trump did not name any0ne directly in the tweet, but his reference to "Progressive' Democrat Congresswomen" was widely interpreted as a reference to a group of women elected to the House of Representatives last year who have been among the party's most prominent critics of the president.

Omar is a first-term congresswoman representing a district in Minnesota who was born in Somalia but grew up in the US after moving to the country with her family as a refugee in her childhood. She is the first black Muslim woman elected to the House of Representatives.

Tlaib, who represents a district in Michigan, is the Detroit-born daughter of Palestinian migrants.

Trump's comments were also interpreted as directed at Alexandria Ocasio-Cortez, also US-born to parents from the US territory of Puerto Rico, and Ayanna Pressley, an African American congresswoman representing a district in Massachusetts. 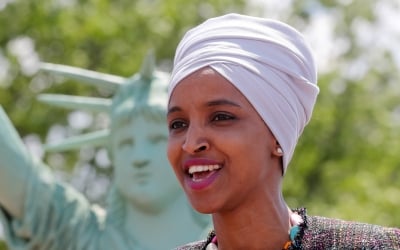 Trump said the women "originally came from countries whose governments are a complete and total catastrophe, the worst, most corrupt and inept anywhere in the world".

He accused the women of "viciously telling the people of the United States, the greatest and most powerful Nation on earth, how our government is to be run.

"Why don't they go back and help fix the totally broken and crime infested places from which they came?"

It is the latest racist comment by Trump, who last year reportedly referred to countries in Africa as "shithole" nations, and who has spoken of "an invasion" of undocumented migrants.

The Council on American-Islamic Relations, a Washington-based Muslim civil rights group, said that Trump might have been arrested if he "shouted the same thing at a Muslim woman wearing a hijab in Walmart".

“Trump’s latest racist tweets echo the bigoted shouts of ‘go back where you came from’ heard daily by American Muslim women and children, immigrants and members of other minority communities across our nation. It is sad to see the occupant of the Oval Office transition from empowering and encouraging racist taunts to actually using them himself," said the group's national executive director, Nihad Awad.

During his 2016 election campaign, Donald Trump repeatedly used anti-Muslim bigotry to appeal to his base.

With the 2020 election season approaching, Trump's anti-Muslim rhetoric has only escalated, with a series of attacks on US Congresswoman Ilhan Omar.

Not only has Trump called for Omar to resign from Congress and from the house committee on foreign affairs, he also linked Omar to the September 11 attacks when he tweeted a video montage that juxtoposed out-of-context comments made by Omar with footage of the 9/11 attacks.

The Congresswoman received a number of death threats after the video was tweeted by Trump.

Omar, as a Black Muslim refugee from Somalia who holds critical and independent positions on Israel, the US military industrial complex, immigration, race, and gender politics, is the very emodiment of that fear Trump wants to tap into with his base.

Trump has even referred to Omar as the leader of the Democratic Party, in a bid to escalate fears of a Muslim immigrant take over of the United States.

But Omar has refused to be bullied into silence.

In a post on 6 May, she tweeted her comments in a Huffington Post interview in which she had described herself as Trump's "biggest nemesis".

This is a president who has come to power vilifying and demonizing immigrants and refugees. He proudly said we should halt Muslims from entering our country.

It’s not a surprise that he finds his biggest nemesis in me. https://t.co/vl7tjmnSFr

She has tackled his policy on Muslims, refugees, described him as having 'trafficked in hate your whole life'...

You have trafficked in hate your whole life—against Jews, Muslims, Indigenous, immigrants, black people and more. I learned from people impacted by my words. When will you? https://t.co/EqqTyjkiNE

... as well as chiding him over his purported inability to 'be presidential’.

“Despite the increase, a majority of respondents - 58 percent - said that Trump lacks those qualities.”

Speaking to Middle East Eye earlier this year, Omar, who has frequently been targeted by Trump on Twitter, said that the president had "unearthed... in the ugliest way" levels of racism and bigotry in American society that was rarely spoken about openly, and said that he needed to be called out.

"I think we have to be very consistent in calling [this] out regardless of whether it makes people uncomfortable or not," she said.

Responding on Twitter on Sunday, Omar described Trump as "the worst, most corrupt and inept president we have ever seen".

As Members of Congress, the only country we swear an oath to is the United States.

Which is why we are fighting to protect it from the worst, most corrupt and inept president we have ever seen. https://t.co/FBygHa2QTt

Tlaib called for Trump to be impeached, describing him as "a lawless and complete failure of a president".

Ocasio-Cortez also responded to Trump on Twitter on Sunday afternoon, saying "the country I 'come from,' & the country we all swear to, is the United States.

"But given how you’ve destroyed our border with inhumane camps, all at a benefit to you & the corps who profit off them, you are absolutely right about the corruption laid at your feet," she continued. "You are angry because you can’t conceive of an America that includes us," she said.

"You rely on a frightened America for your plunder."

Pressley wrote on Twitter: "THIS is what racism looks like. WE are what democracy looks like. And we’re not going anywhere. Except back to DC to fight for the families you marginalize and vilify everyday."

Many senior figures in the Democratic Party also spoke out against Trump.

Bernie Sanders, who is running for the party's 2020 presidential nomination, wrote: "When I call the president a racist, this is what I'm talking about." Congressman Don Beyer of Virginia said in a Twitter post: "This is undisguised racism, misogyny, and xenophobia, and everyone in Congress regardless of party should condemn it."

House Speaker Nancy Pelosi has warned her party to avoid the liberal policies pushed by Ocasio-Cortez and the other progressives if the Democrats hope to beat Trump in the 2020 election.

But on Twitter on Sunday, she criticised Trump's "attack".

"I reject @realDonaldTrump's xenophobic comments meant to divide our nation," she said. Pelosi added that Trump's comments reaffirmed "his plan to 'Make America Great Again' has always been about making America white again."