Struggling with the trauma of a past they did not choose, young former Islamic State recruits yearn for a regular life 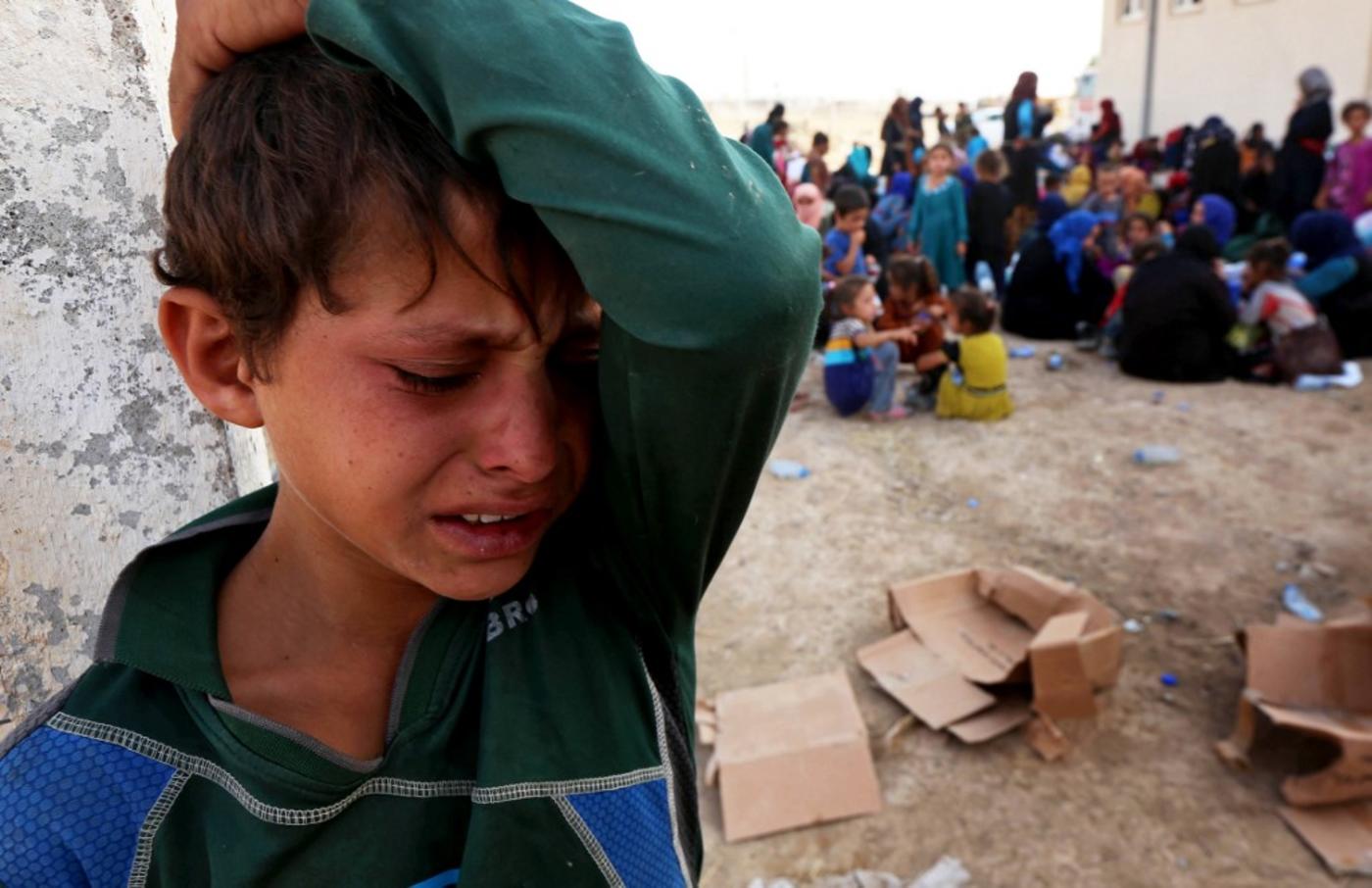 A displaced Iraqi boy who fled the northern city of Hawija due to fighting with the Islamic State group in September 2017 (AFP)
By
Elizabeth Hagedorn
in
Erbil, Iraq

Seated on a folding chair in the prison's break room, Adnan* keeps his head down, staring at his off-brand Nike flip-flops.

His tired eyes and weathered skin give him the appearance of a man twice his age. At just 17 years old, Adnan has spent much of his teenage years within the confines of the Women and Children's Reformatory in the Iraqi Kurdish region's capital of Erbil.

Across the street from a popular shopping mall, the inconspicuous detention centre currently houses 32 boys suspected of joining the Islamic State (IS) when the group controlled territory in Syria and Iraq the size of Britain.

Three years ago, Adnan was living in a camp for displaced Iraqis near the former IS stronghold of Mosul. As he tells it, another boy accused him of being in IS and turned him into the Kurdish security forces, known as the Assayish. Adnan spent half a year in jail before a court handed him a five-year sentence for alleged involvement in IS.

"I am innocent," Adnan says, his voice rising. "There are some people who did things, but not me."

Nearly all of the boys interviewed by Middle East Eye said they ended up behind bars because they were in the wrong place at the wrong time or happened to share the name of another boy on Iraq's "wanted" lists of IS suspects.

Adnan was 14 years old when he was arrested, and younger still when authorities claim he joined IS. His account, and those of the other detainees who professed their innocence, could not be independently verified.

But rights advocates say Adnan's alleged involvement is beside the point: children participating in armed conflicts are victims themselves - in need of rehabilitation, not incarceration.

Raised in 'the caliphate'

Thousands of Iraqi children are estimated to have been recruited by IS.

In Iraq, where the minimum age of criminal responsibility is nine, prosecutors make little distinction between those who joined the group willingly and those who were coerced; nor is the extent of a child's involvement often taken into account.

The country's sweeping counterterrorism laws spell out equally as harsh sentences for those who played minor roles, such as garbage collectors or cooks, and those who actively participated in the fighting.

"They threatened me, and said you'll be in prison longer if you don't admit," said 17-year-old Samer. After the group was expelled from his neighbourhood, Samer said, he tried to travel to Erbil for work but was arrested at a Kurdish-run checkpoint for alleged IS membership. Fearing a longer sentence, Samer confessed to a crime he says he did not commit.

The United Nations has raised concerns about such coerced confessions. A recent UN report cited "frequent allegations of torture" and prosecutions that focused on IS "association" rather than direct participation in terrorist activity.

It is a system Jo Becker, the advocacy director of the children's rights division at Human Rights Watch, calls not only punitive but also counterproductive.

"Iraq is picking up kids based on these wanted lists, dubious accusations from anonymous sources, torturing them into confessions, detaining them, depriving them of education," said Becker. "I think further resentments and grievances are inevitable."

Ibrahim dreamed of playing professional football and spent his childhood participating in local tournaments in Mosul. As a teen, he continued to play under IS rule, but with restrictions. Shorts were banned and games paused for prayers.

Ibrahim thought that after fleeing IS he could pursue football as a career. But now, the 21-year-old detainee says that goal feels as distant as ever.

"I get really angry thinking about it sometimes," said Ibrahim, who was forced, he says, into giving a false confession. "Yesterday, I was so angry I started hitting my head against the wall and crying."

Without help addressing the trauma of boys like Ibrahim, experts warn these imprisoned minors could pose a significant security threat to Iraq when released.

"We're creating new criminals," said Iraqi lawyer Zyad Saeed. "They’ll get five to 15 years. After that, they'll go out without a lot of rehabilitation and hate." Although private, small-scale programmes exist for Iraqi children traumatised by IS, particularly Yazidis, there is no nationwide effort to provide psychological support to former recruits.

For more than a year, Saeed and his colleagues at the Baghdad-based Iraqi Law Firm lobbied government agencies to provide reintegration opportunities for detained youth.

As a lawyer who trains judges handling terrorism cases, Saeed has seen first hand the impact of Iraq's approach to prosecuting IS-affiliated children.

Everywhere Saeed went - the Iraqi prime minister's office, the judiciary, the parliament - he heard concern, but no appetite for intervention.

"It's not a priority of the government," said Saeed. "There is no strategy. There is no plan."

Lessons may be drawn from Pakistan's work deprogramming would-be suicide bombers recruited by the Taliban as children.

Since opening its doors in 2009, an army-sponsored deradicalisation centre in the country's Swat Valley says it has reintegrated more than 230 former child militants with a near-zero recidivism rate.

Clinical psychologist Feriha Peracha, who runs the centre, believes her approach could also work with IS recruits.

"I think culturally, Iraq and Pakistan are not that much different," said Peracha. "Children are children."

Before beginning treatment, boys under Peracha's care are individually profiled to understand their push and pull factors. In what is typically a years-long process, the boys receive both academic and "corrective religious education," and targets are set to get them back into school or find employment.

"It is about having an individualised programme. You can't treat them like an assembly line," said Peracha.

She credits the programme's success to post-treatment monitoring. Twice a month, case managers do in-person follow-ups with the boys in their communities.

No such monitoring exists after young men leave the Erbil Women and Children's Reformatory, and prison officials concede they can only do so much in terms of rehabilitating those who pass through their facility.

“When they arrive, they are totally brainwashed,” one guard told MEE.

When their sentences are up, prison officials make a determination on whether they are fit to be released. Those considered still prone to violence may get extra time added to their sentences.

The stigma of prison

In pushing for reintegration programmes, advocates point out that ideology is rarely the main reason children join armed groups in the first place. As Wissam remembers it, he was not given any choice when IS took him and his friends for training when he was 14 years old.

"I joined for 15 days, but I didn't hurt anyone," he said of his time with the group.

Their indoctrination consisted of two weeks of religious education, along with some instruction on how to handle a weapon.

Five years later, Wissam says he doesn't remember any of what he was taught to believe. He now yearns to return to a regular classroom and finish his secondary education.

But Wissam fears when he leaves this correctional centre in a few months, the IS stigma will follow him home.

"I won't stay here in Iraq. I will be rearrested if I get released," he says. "I'm forever branded IS."

*Names of the detainees have been changed