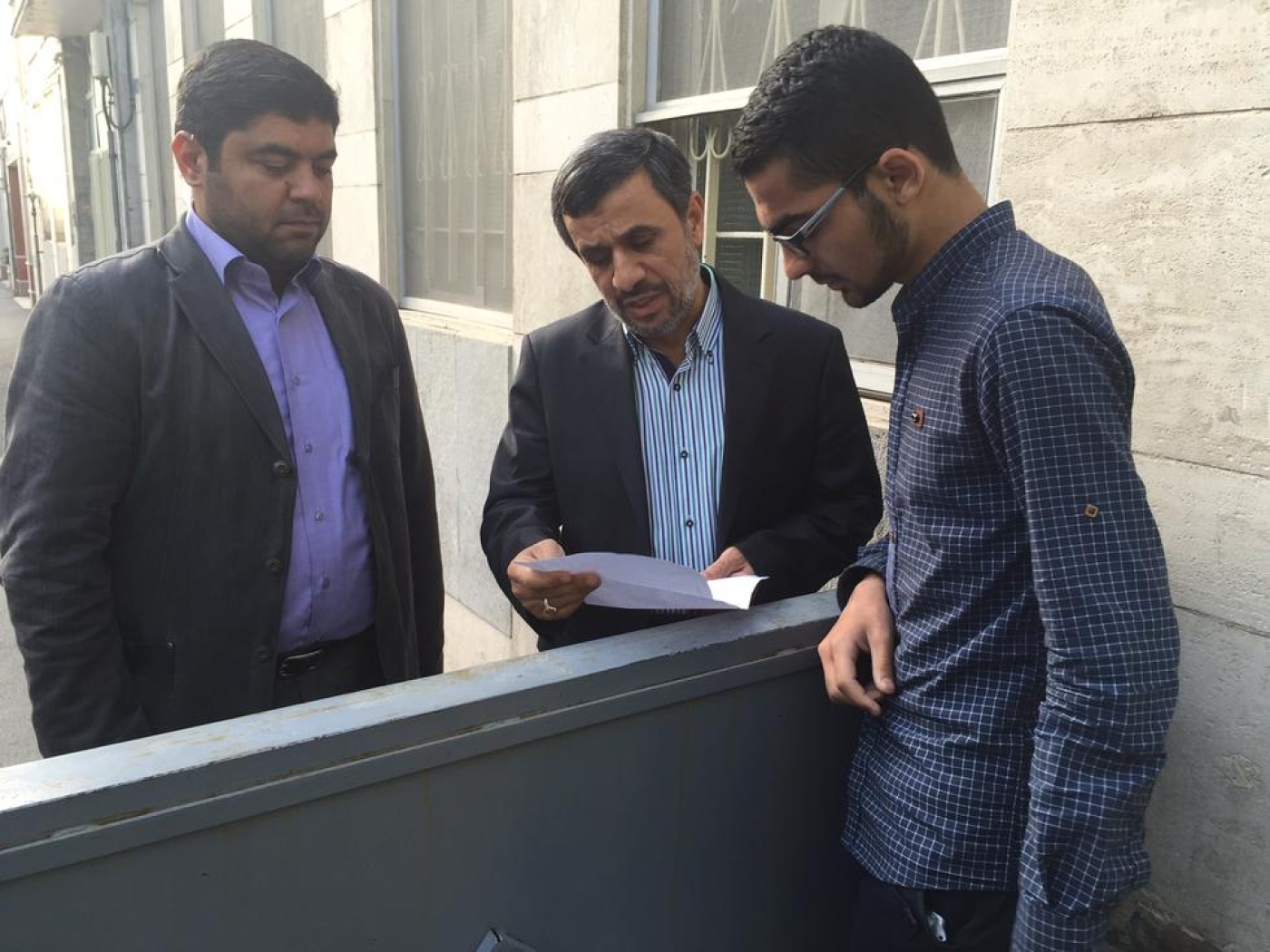 TEHRAN - The eyes are still half crinkled up, a frown still creases his forehead but, above all, nothing has changed in Mahmoud Ahmedinejad’s readiness to meet humble Iranian petitioners on a one-to-one basis, just as he did when he was President until 2013.

The ritual begins at 7am on most weekday mornings in the eastern Tehran suburb of Narmak outside the family home which Ahmedinad shares with two of his married children. Clutching hand-written letters, sad-looking men and women line up in the street behind a low metal barrier in a modern re-play of a time-honoured tradition of the benign ruler bending his ear to the poor subject.

Armed guards take up positions shortly before the ex-president walks briskly down the alley from his house and greets the first caller. A sympathetic look, studied concentration, a few words and the petitioner is invited to move aside to let the next person come forward.

The ex-president only breaks into a smile when my translator shuffles to the head of the line and asks whether Ahmedinejad thinks Iran’s negotiators are doing a good job in the nuclear talks. “No interview”, he grins. When I put the next question in English and the translator says in Farsi “Are you planning to run for President again?”, the grin gets wider. “No interview,” he repeats.

The question is one which not a few Iranians think about. No other Iranian ex-president performs this ancient rite of regular public audience for anyone who wishes to bring their problems forward. Ahmedinejad started the practice during his two-term presidency from 2005 to 2013 and it fits his image as a populist with an ear for ordinary people’s issues unlike the aloof clerics who came before and after him. But is it just force of habit that makes him continue, or is there a longer-term objective?

Ahmedinejad’s availability to petitioners is not mentioned in the Iranian media, so he gets no publicity or political kudos from it. Indeed, under the complicated system of censorship and self-censorship which affects Iran’s press and TV, Ahmedinejad’s name never now appears.   The judiciary recently issued an order banning any mention of or quotation from the reformist ex-president Mohammad Khatami. There has been no announcement of a similar ban on Ahmadinejad but the official silence is similar.

Yet Ahmedinejad could have a political future, according to several analysts in Tehran. If the nuclear talks break down and Iran’s relations with the West go back to a state of tension and mutual name-calling, the country’s Supreme Leader, Ayatollah Ali Khamenei, might decide a hard-line president is needed again. There might also be an opening for Ahmedinejad if the talks succeed but the lifting of sanctions, which most Iranians are eagerly awaiting, turns out to bring no significant improvement in living standards. Blame the current president and his team and go back to a populist. For either scenario Ahmedinejad is a useful card in Khamenei’s hand.

Meanwhile, it is only word of mouth that brings people to Narmak shortly after dawn. The queue is not long. It averages around half a dozen people a day, according to one of the policemen who mans a guard post outside the Ahmedinejad home. But word travels in societies in spite of censorship, and Ahmedinejad’s image as a man who understands ordinary people does not suffer from his early morning audiences. People tell their friends.

“Why did you come?” I asked a young man who was sitting in his car, telling his wife what Ahmedinejad had just said to him. The young man had worked in a soft-drinks company which closed 18 months ago. All his efforts to find another job had failed. The ex-president told him frankly “I don’t think I can help you. I’m not influential any more but come back with a paper and let’s see.” The young man said he had not realised he needed to bring a letter but he would prepare one and return.

Another young man who did bring a letter told us he had slept all night in a nearby park so as to be there when Ahmedinejad came out. He needed rent money to stop him, his wife, and child being evicted. A mullah in his mosque suggested he try Ahmedinejad. The ex-president took the letter and promised to pass it to a welfare agency that offers cheap loans.

An elderly widow who used to be a shop assistant was a repeat visitor to Ahmedinejad. She had been given the equivalent of $700 by him when he was president to help to buy a flat for herself and her married children, she said. Now she needed more. She did not like Iran’s current president, Hassan Rouhani, but knew Ahmedinejad would help her.

No recent Iranian politician arouses such emotion, for and against. For all the petitioners who come to Narmak there are many other Iranians who criticise him. Some say they are ashamed of what he did to the country’s image.

A couple of hundred metres from the Ahmedinejad home is a small shop where members of the ex-president’s family sometimes drop in. “Our country was isolated after the Islamic revolution, but Ahmedinejad made it more isolated. His views on the Holocaust were peculiar to him. Our society doesn’t agree with them,” said the young man who runs it. “The lifting of sanctions will give Iran a better image, but some groups believe the economy was better under his rule and may support him. I doubt whether he can really come back to power. I’ve heard he doesn’t listen to advisers. It’s one-man rule.”

In the corridors of the Majlis, Iran’s parliament, opinions are mixed. Ahmedinejad’s performance in power put many MPs off. “He had some positive points. He’s a practical man and a good manager, but I doubt if he’ll get back to power,” says Mohammed Esmaelian, an MP from Khorasan. “He may be popular among the less educated public but people who analyse things know his priorities weren’t in the public interest.”

Hossein Kanani Moghaddam, who founded the Green Party which has five MPs, is scathing about Ahmedinejad. “The pro-Ahmedinejad people would like the nuclear deal to collapse, but they are a minority and most will be voted out in the elections next February if the deal goes through,” he says. “Ahmedinejad is living in a cave. He spends his time praying but he’s finished. He has many questions he must answer to people. He’s like Mohammed Morsi [the deposed Egyptian president], except he’s not in gaol. He’s living in the gaol of his own mind.”

The Ahmedinejad legacy in the economy is proving hard for the Rouhani government to unravel. The former president’s hand-outs for individual petitioners were replicated on a national scale during his time in power. During frequent trips to the provinces he would listen to pleas from ordinary people or local officials for new bridges or irrigation systems and just order his staff to take action. Hundreds of such minor infrastructure projects were started but have had to be curtailed. Inflation became rampant.

Saeed Leylaz, an economic journalist and reformist, who was sentenced to a long prison term after Ahmedinejad was re-elected in 2009, is naturally no admirer. He says it was not just sanctions and the collapse of the world oil price which took the Iranian economy into recession.   Ahmedinejad and his revolutionary friends did well out of sanctions-busting. “Ahmedinejad wanted to inject turbulence. They made a lot of profit out of sanctions. They looted this country. They created a new social class,” he says.

Standing up to Bush

In Iran’s political system much depends on whom the country’s ruling clerics choose to accept as candidates to be put to the popular vote. The 12-man Guardian Council, made up of theologians and Islamic jurists, vets the presidential list. Some analysts argue that Ahmedinejad’s candidacy in 2005 made sense at a time when the White House was also in the hands of a confrontationist like George W. Bush.

“Ahmedinejad is quite different from Rouhani. He had huge self-confidence. His psychological attitude was to attack on every issue. In international affairs, in particular, he thought attack was the best defence. He thought power makes the difference between countries. Power makes right, so Iran had to show strength to the world,” says Amir Mohebbian, the director of the Arya News Agency. He describes himself as a political moderate. “Bush was an irrational man, unilateralist and aggressive. He wanted to attack Iran as well as Iraq. At the time we had a president, Khatami, who was rational. Yet Bush called Iran part of the “axis of evil”, even when Khatami was in charge. So the situation dictated that we also got an irrational president. You wouldn't know what was in his mind or what he might do. That acted as a deterrent,” he adds.

After Khatami, the reformist, and Ahmedinejad, the conservative (described by some Iranian analysts as a ‘principle-ist), Iran in 2013 needed someone like Rouhani who was a bit of both, in other words a centrist, in Mohebbian’s view.

Ahmedinejad may be out of the media spotlight as he greets his daily trickle of petitioners but he is in constant touch with the hardliners in the elite, plotting their next moves. For Iran’s Supreme Leader Ayatollah Khamenei, Ahmedinejad is a prickly potential ally. The two men had a furious dispute in April 2011 when Ahmedinejad sought to get Heydar Moslehi, the intelligence minister, to resign and Khamenei publicly opposed the move. Ahmedinejad went home to Narmak and stayed there for 11 days sulking and apparently considering whether to resign. But he came to back to his office and eventually pledged his loyalty to Khamenei.

In spite of these relatively recent tensions, Ahmedinejad could still be used by Khamenei as a bargaining chip, both now in the negotiations and as a fall-back if things go wrong, Mohebbian argues. Ahmedinejad is Iran’s best-known hard-line face.

“At the moment we are in a good, rational and moderate place. The ball is in the US court. They must show rationality or irrationality in the next stage of the talks. We need a person to show the US that if you behave as a bad guy, we’re ready to send Ahmedinejad back to the scene,” Mohebbian concludes.