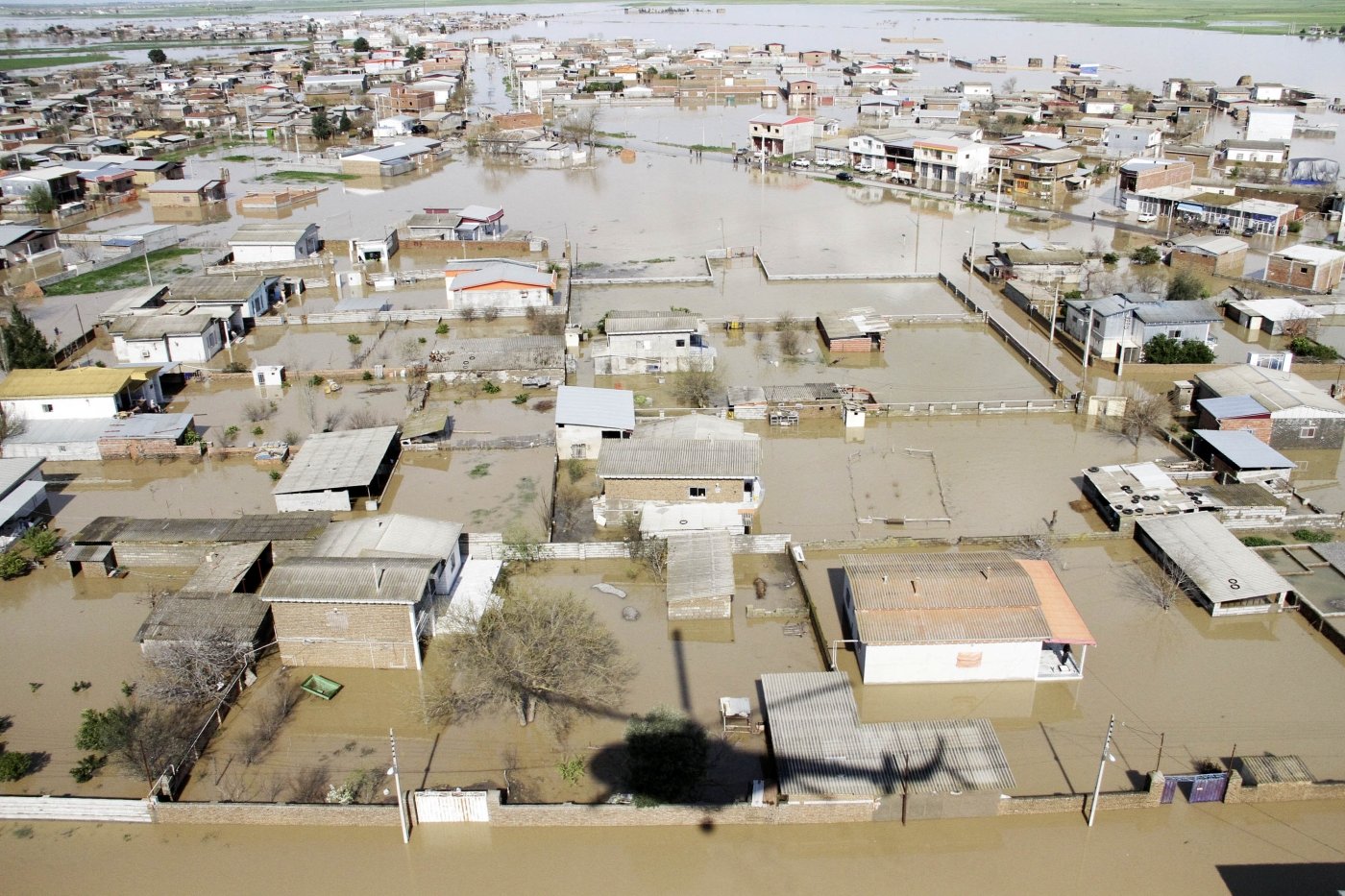 A general view of flooding in Golestan province, Iran (Reuters)
By
MEE correspondent

Iranian Vice President Eshagh Jahangiri sacked the governor-general of Golestan province, Manaf Hashemi, who had travelled abroad while residents of hundreds of villages and several cities under his jurisdiction fell victim to a devastating flood, ISNA news agency reports.

In recent days a video has gone viral in Iran showing Hashemi arriving late at a meeting in which Jahangiri dismissed him.

On 17 March, a three-day downpour began in the northern province that killed two, forced 7,000 to leave their homes and left 8,000 nomads living in Maraveh Tappeh county cut off from the rest of the province, according to the official news agency IRNA.

Raisi ordered the head of Iran’s Inspection Organisation, Naser Seraj, to “be immediately present in the flood-hit region” and investigate any “failure or fault” in providing aid or lack of necessary preventive actions to avoid damages, according to Fars news agency.

A week after the disaster in Golestan, another flood hit Iran’s historical city of Shiraz and left 19 dead and 105 injured.

Iranian officials have emphasised that US President Donald Trump’s executive order recognizing Israel's "sovereignty" over the Syrian Golan Heights confirms the necessity of reinforcing the Axis of Resistance and Iran’s long-term military presence in Syria.

Ali Akbar Velayati, head of the Iranian organization World Assembly of Islamic Awakening, in a statement condemned the move as “an unlawful and desperate decision,” Fars news agency reported.

“We urge all nations, groups, parties, movements and governments in the Islamic world and all freedom lovers to confront the US’ thuggish, one-sided and bullying behaviour,” the statement read.

Deputy Speaker of Parliament Ali Motahari also chimed in, tweeting: “Trump’s impudent and stupid act of recognising the sovereignty of the Zionist regime over the Golan Heights showed that firstly he believes that the law of the jungle rules the world and secondly that it is essential for the resistance forces, whom Iranians are a part, to continue their presence in Syria.”

On Twitter, Salavati asked the conservatives and regime-change advocates how they expected Mohammed Javad Zarif, Iran’s foreign minister, to sign a solid deal with the US while Trump acts against all international laws.

Happy Nowruz - no thanks

Attempts by western politicians to send Nowruz greetings have been met with acerbic responses by Iranians suffering the harsh impact of sanctions and the US travel ban, accusing the West of double standards and hypocrisy.

On 23 March, the US special representative on Iran, Brian Hook, posted a video on Twitter greeting the Persian New Year while standing in front of a traditional Iranian Haft-Sin table in the lobby of the State Department.

Negar Mortazavi, an Iranian-American journalist, mocked Hook in a tweet, writing: “Hi Iranians, We sanction your economy and destroy your lives. We put a travel ban so you can’t come here to visit loved ones, even for weddings and funerals. But hey look at this special Nowruz table at State Department that we set for no other nation.”

UK Ambassador to Iran Rob Macaire,in a Farsi video message on Twitter, emphasised on the necessity of “honest negotiations” to “improve the relations between the two countries”.

“Huuumm, talking of honest negotiations was a funny thing to say, we have seen your honesty in the nuclear deal negotiations, and through the history of the relations between the two countries,” one Iranian responded.

On 23 March, Rahmati was a co-commentator on IRIB’s sports TV channel during a friendly match between the Brazil and Panama national football teams. Rahmati, an ex-footballer, leads Iran’s under-14 women’s football team.

Iranian media has also reported that more women analysts will be invited to IRIB as experts for live matches. Fereshteh Karimi, one of the 10 Futsal Planet nominees for best women player in 2013, will also appear as a co-commentator on IRIB, Khabar Online reported.

The recent move by the conservative IRIB has been praised by Iranian football lovers on social media.

“This expert they invited to analyse the match is much better than the ill-informed experts we repeatedly see on the TV. Her information is so up to date,” one Iranian wrote on Twitter.

Football is the most popular sport among Iranians and women footballers play in their own league.