TEHRAN - Iran’s economy could enjoy a 2 percent bounce in growth if there is a nuclear agreement and sanctions are lifted, according to top officials at Iran’s Central Bank.

The surge will not come immediately after 30 June, the deadline which all sides have set for the nuclear talks to finish, they caution, but the impact should be realised by the fourth quarter of the current Iranian year (the first quarter of 2016). Iran is demanding an immediate lifting of all sanctions as soon as the nuclear agreement with the P5+1 nations is signed.

Even without any lifting of sanctions, the Central Bank and the IMF both expect some growth in the Iranian economy this year - but the removal of sanctions would have a significant effect, Akbar Komijani, the senior deputy governor, told Middle East Eye.

“Under the assumption that present conditions continue and there is no change in sanctions until March 2016, we are expecting the growth rate to be around 1 percent. The IMF says 0.6 percent. After sanctions are removed we may not experience tangible benefits in the first months but by the end of the financial year the growth rate could be around 2.5 to 3 percent,” he said.

Komijani is one of a group of academic economists brought in by the new Central Bank governor, Valiollah Seif, who was appointed after President Hassan Rouhani took office in 2013.

Over the last two years the bank and the Rouhani administration have managed to turn around an economy in recession, bring about a huge reduction in inflation and stabilise the exchange rate of the rial. “There is a very calm and stable situation in the foreign exchange market. We hope this will continue and we’re expecting that in the months after a nuclear agreement we may see some appreciation in the rial,” Komijani said.

The bank expects the immediate unfreezing of those of its assets that are held abroad as soon as a deal is reached. It will also be able to resume contacts with foreign banks and make international credit card transactions possible again.

Inflation has come down sharply from a monthly rate of 45.1 percent in June 2013 when Rouhani was elected to succeed Mahmoud Ahmadinejad to 15.5 percent in April this year, the last month for which there are figures. The bank’s aim is to reduce inflation to single figures by March 2017.

Iran is hoping for a surge in foreign investment and has already had numerous feelers from investors in anticipation of agreement between Iran and the six world powers on changes in Iran’s nuclear programme in return for the lifting of sanctions.

The bank hopes its record of macroeconomic management over the last two years will have inspired confidence. “Curbing inflation was the highest priority when the new government came in,” Komijani said. “Its most important macroeconomic action was to amend the budget for 2013-14 and the pivotal point was fiscal discipline. The feeling was the previous budget was very expansionary. It was amended downwards and this gave the Central Bank a signal.”

There had been excessive growth of liquidity in previous years, so the Central Bank used this opportunity to pursue a disciplinary monetary and credit policy.

One job the bank’s new management did was to tighten the financing of the massive Mehr housing project that had been started under Ahmadinejad and was designed to construct 2.3 million homes. Instead of getting further injections of funds, the Housing Bank was given a three-year grace period not to repay its debts to the Central Bank and was directed to finance new construction from loan repayments by the first wave of occupants of those houses. 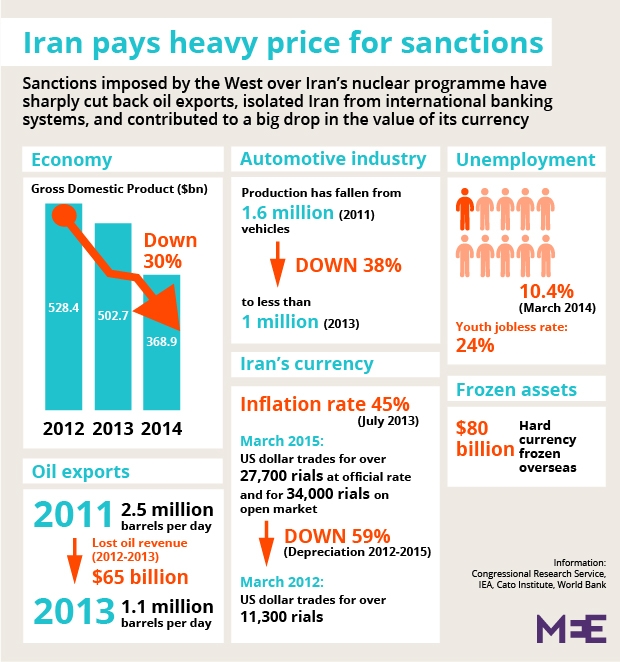 Iranian officials say they are ready to resume oil sales to Europe as soon as sanctions are lifted. The EU banned purchases of Iranian oil in 2012. At present only China, India, Japan, South Korea and Turkey are buying Iranian oil. Mohsen Qamsari, the director for international affairs of the National Iranian Oil Company, has told local media here that almost half the quantity of oil that Iran used to sell to Europe could be made available immediately on the spot market.

The rest could be supplied when European importers come to the end of their current contracts and look for new ones.

More than 95 percent of Iran’s exports went to Asia last year, according to figures released this month, while only 2.9 percent went to Europe. China has become Iran’s leading export market. It takes just under 30 per cent of Iran’s exports, but even though Iran also imports heavily from China, Iran has a trade surplus with China.

While the lifting of US, EU and UN sanctions is expected to give the economy a boost, there is some concern among local manufacturers who have been filling the gap caused by the sanctions on imports. They are hoping for government protection.

“The Iranian market will be inundated with foreign investors and resources once the sanctions are lifted, and we are making every effort to manage the situation," First Vice President Eshaq Jahangiri was quoted as saying by the IRNA news agency last week. "We would like to tell our trade partners in the West to consider co-operating with Iran rather than merely exporting consumer goods." 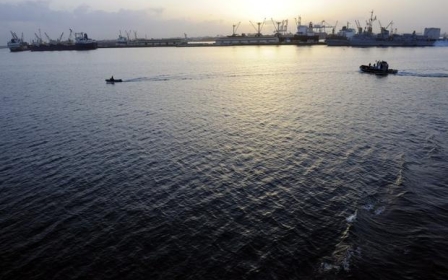