Iraq and Saudi Arabia are setting up a coordination council to upgrade strategic ties, a joint statement said on Tuesday, as part of an attempt to heal troubled relations between the Arab neighbours.

Iraq's prime minister, Haider al-Abadi, met King Salman a day earlier on the first leg of a Middle East tour that will also include Iran and Kuwait.

"The countries agreed to establish a coordination council to upgrade relations to the hoped for strategic level and open new horizons for cooperation in different fields," said the statement carried by the official Saudi Press Agency.

It said the two countries had achieved a "quantum leap" in bilateral relations and stressed the importance of further official visits.

Iraq lies on the fault line between Shia Iran and the mostly Sunni Arab world. Deep-running animosity and distrust between the two sides is fuelled by sectarian divides.

Saudi Arabia reopened its embassy in Baghdad in 2015 following a 25-year break, and in February the Saudi foreign minister, Adel al-Jubeir, made a rare visit to Baghdad.

That has been seen as heralding closer cooperation against Islamic State, which controls territory in Iraq and in Syria and has claimed bombings in Saudi Arabia.

Abadi arrived in Tehran on Tuesday, according to a post on his official Twitter account. Iran, by leveraging its ties with Iraq's Shia, has emerged as the main power broker in Iraq after the United States withdrew its troops in 2011.

The trip was initially postponed to avoid appearing to take sides in a diplomatic dispute between Qatar and other Arab states including Saudi Arabia.

King Salman and Abadi last met in March on the sidelines of an Arab summit.

Their countries are the first and second largest OPEC producers and cooperated in November to bring about an agreement to support crude prices. 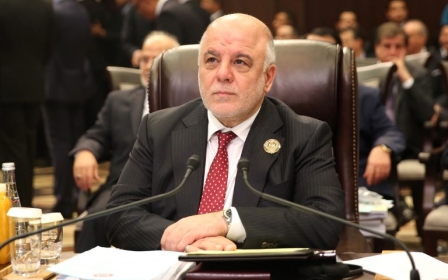