Iraqi Kurdish authorities crack down on media and anti-government protests Fresh protests broke out over the weekend in the Sulaymaniyah, Erbil, Dohuk and Halabja provinces (MEE/Dana Taib Menmy)
By
Dana Taib Menmy
in
Sulaimaniyah, Iraqi Kurdistan 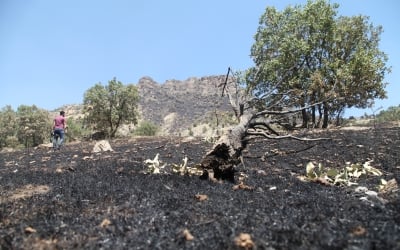 Kurdish authorities have clamped down on protests and local media as anti-government protests swept through Iraqi Kurdistan over the regional authority's handling of the economy.

In the past week, dozens of protesters have been arrested by the Kurdistan Regional Government (KRG), accusing the Kurdistan Workers' Party (PKK) and opposition parties of turning the demonstrations violent.

Several Kurdish MPs in the Iraqi parliament have accused the KRG of curbing peaceful protest and called on the United Nations to intervene.

The protests came as the KRG failed to reach an agreement with the Iraqi government over the region's share of the federal budget.

Iraq and the KRG are both facing a deep economic and financial crisis as a result of the global decline in oil prices and corruption.

Oil revenues comprise more than 90 percent of the income of both governments. Failure to reach an agreement has led to delays in paying salaries to nearly 1.2 million people on the public payroll in the Iraqi Kurdistan region.

Fresh protests broke out over the weekend in the Sulaymaniyah, Erbil, Dohuk and Halabja provinces.

A KRG statement, seen by MEE, accused the opposition New Generation (NG) party, with the help of the PKK, of "turning the protests violent, chanting pro-PKK slogans and shooting at civilians and KRG security forces: wounding 61 officers and four civilians".

NRT, a television channel affiliated to NG, was also shut down by the government in the Iraqi Kurdish capital of Erbil.

“Those accusations are totally baseless, since life conditions in Kurdistan have reached such a level that people are upset and revolting against the KRG over all aspects,” Rebwar Abdul-Rahman, head of NG’s media department, told MEE over the telephone.

“People are demonstrating against the KRG’s failure to carry out reforms and improve their lives."

Abdul-Rahman said that the party had called for peaceful demonstrations, and described the government's accusations as a pretext to shun its "responsibilities and and failures over nearly three decades”.

"It is such peaceful demonstrations that terrify the authorities," Shaswar Abdul-Wahid, leader of NG and owner of the NRT TV channel, told protesters in Sulaymaniyah.

Kawa Abdulqadir, a lawmaker from the NG faction in the Kurdistan regional parliament, said he was beaten by security forces during a demonstration in Erbil on Saturday.

Abdulqadir also posted pictures on his Facebook page showing wounds he said he sustained while protesting.

Meanwhile, the headquarters of both the district administration in Kalar and Halabja's city traffic police were set on fire by protestors, with the KRG firing live bullets to disperse the crowd.

In a phone call with Halabja's governor on Sunday, Masrour Barzani, the KRG premier, said that torching public institutions was a “crime” and the perpetrators should be punished according to the law.

“If the KRG fails to reach a long-term agreement on the budget with Baghdad and continues to not pay government employees and their own loyalists, I predict the protests will expand," Zmkan Ali Saleem, lecturer at the College of Political Science at the University of Sulaimani, told MEE.

Saleem said he had not seen evidence that the PKK incited violence at at the protests. But he added that it would not be surprising if the group wanted to challenge the ruling Kurdistan Democratic party (KDP), which is close to Ankara, over its silence regarding Turkish attacks on the PKK.

Many in Iraqi Kurdistan have complained that the government has not done enough to stop Turkish bombing against armed groups based in northern Iraq, which has affected the lives of civilians.

In late June, Human Rights Watch said that an attack by the Turkish military on an Iranian armed group in the Kurdistan Region of Iraq, which wounded six civilians, failed to take the necessary precautions to minimise civilian casualties.