Iraqis light candles at the site of the explosion in a popular market in the mostly Shia neighbourhood of Sadr City, east of Baghdad (AFP)
By
MEE and agencies

The militants behind last week's suicide bombing at a market in the capital Baghdad, a day before Eid al-Adha, were planning more attacks during the Muslim holiday, according to Iraq's Interior Ministry.

Earlier this week, the interior ministry released the pictures of five suspects, including three brothers, after Monday's attack, which the Islamic State group claimed.

The suicide bombing at the Al-Woheilat market in Sadr City, a predominantly Shia area, killed at least 30 people. 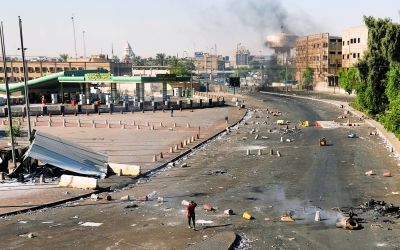 Iraq's security forces said they dismantled "two terrorist networks in the provinces of Anbar and Kirkuk responsible for the 19 July attacks in Sadr City."

"They were planning other attacks in other parts of Baghdad and other provinces during Eid," a ministry statement said.

Later on Sunday, authorities in the autonomous Kurdistan region said they had detained another suspect following a request from Baghdad, bringing the number of arrests to six.

Prime Minister Mustafa Kadhimi announced on Saturday the arrest of the "terror cell" behind the Baghdad market bombing.

Iraqi television broadcast overnight the "confessions" of the five, who were dressed in yellow prison suits, a common practice in major criminal cases in Iraq.

Monday's attack came a week before a 26 July scheduled meeting in Washington between Kadhimi and US President Joe Biden to discuss the upcoming withdrawal of American troops from Iraq.

Kadhimi is under heavy pressure from powerful pro-Iranian factions in his country hoping for an important announcement on the matter.

Some 2,500 US troops are deployed to assist Iraqi forces in the fight against IS, which controlled large parts of Iraqi territory between 2014 and 2017.

The militant group has been officially defeated, but its sleeper cells still carry out occasional attacks.

In January, a suicide attack claimed by IS killed at least 32 people in a crowded market, marking the deadliest bombing in three years.

Religion
What is Arbaeen and how do Shia Muslims mark it?
Inside Iraq
Baghdad condemns Iraq-Kurd forum in Erbil promoting normalisation with Israel
Inside Iraq
Iraqis with disabilities deprived of right to vote 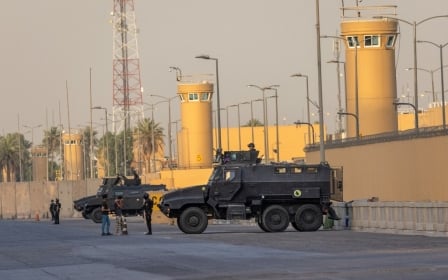