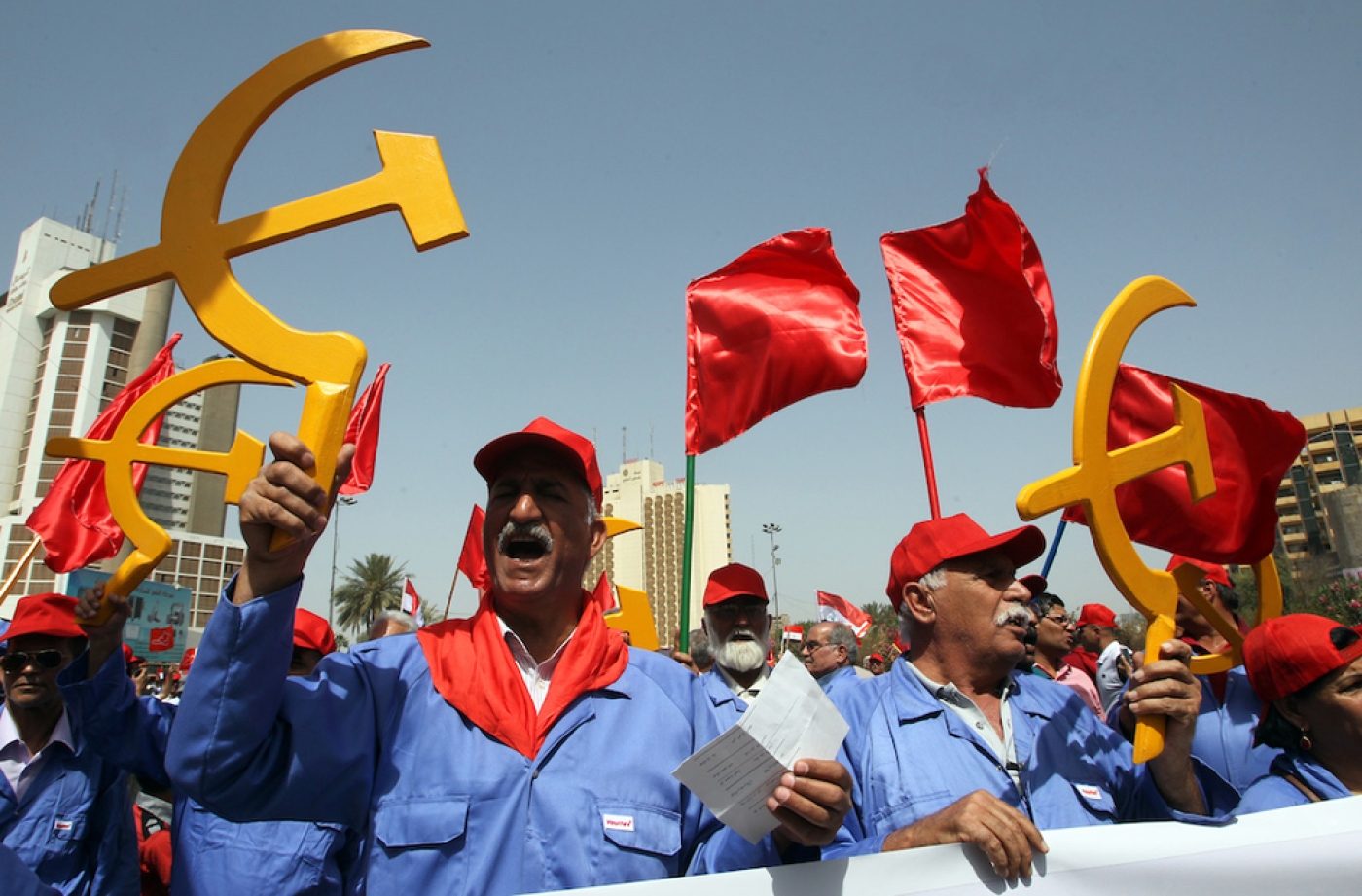 It is perhaps the most unlikely of political alliances, even for a country where electoral rules encourage strange bedfellows. As Iraq prepares for its first post-Islamic State elections, the Communists have thrown their lot in with the Shia conservatives of Muqtada al-Sadr and the result, they promise, is not as bizarre as it may first appear.

Although the pairing of religious conservatives in Sadr's party and the ultra-secular Marxist-Leninists of the Iraqi Communist Party has raised many eyebrows - not least internally - both argue they ultimately draw support from the same social base: the poor, working class and those angry at the rampant cronyism and mismanagement which have seen the country ranked 11th most corrupt in the world by Transparency International.

Both maintain headquarters in the eponymous Sadr City, the highly impoverished and frequently attacked district of Baghdad. And both say they are fighting - politically speaking - for the same future for its three million residents, and the millions of Iraqs beyond.

Salam Ali, a member of the Iraqi Communist Party's central committee, told Middle East Eye that the coalition, named the "Sairoun Alliance", could have a major effect on the nature of Iraqi politics.

"It is a very important development politically in Iraq and, if successful - and that’s a big if because the challenge is great - it will have an impact on politics in the region as well," he explained, speaking to MEE in London.

This coalition is national, civil in character, it opens the possibilities of a change in the political scene

The alliance has grown out of on-going street protests - largely beginning in August 2015 - targeting systemic corruption and advocating political reform. These have seen secular activists, under the banner of the Civic Movement, gathering alongside largely Shia Islamists in common cause.

Despite the surprise at the announcement of the coalition, after the communists broke from the secular Civil Democratic Alliance coalition, Ali said the relationship had been building since 2015.

"It’s not a sudden change," he said. "It is built on cooperation, coordination between this broad civil democratic movement, the protest movement and the Sadrist movement."

He said that it created "a greater climate for open campaigning and to be able to reach out to areas in Baghdad, in the provinces as well, where our party and the other civil democratic forces could not campaign as effectively as it is possible now."

"Now there are examples of coordination with Sadrists in these areas, with young people - now they can coordinate on issues, local issues, like services, the provinicial council, elements of corruption here and there," he said.

In addition, the Communist Party has long championed itself as the one genuinely non-sectarian party in Iraq. This has made Sadr's recent public attempts to cross the sectarian divide and support a unified Iraqi identity another point of common interest.

"This is fundamental - he has distanced himself from sectarian politics," said Salam. "This is the essence of our policy on the protest movement, on its demands, on its electoral strategy as well."

He said that it was possible that, if successful in elections, a "new political map of coalitions" could be formed in Iraq, with further alliances between left-wing forces and what he described as "enlightened, moderate Islamists".

Sadr himself hit back at criticism of the alliance in January, stressing that he was committed to reform and calling for technocrats in place of corrupt ministry officials.

"When we enter into an alliance with parties close to Iran, they accuse us of being Iranian loyalists and when we get closer to Arab parties, they say we are secret agents for them."

"I will participate in elections for the sake of Iraq, to support moderate people and to expel extremists, to achieve reform and to end corruption and nepotism."

Ally with the Devil

At one point the Iraqi Communist party was the largest of its kind in the Middle East and in the 1950s and 1960s exerted a lot of influence on Iraqi politics.

However, the coming to power of the Baath Party, and later Saddam Hussein as president in 1979, led to the repression of the party, often with backing from the CIA.

Salam himself spent the years between 1967 and 2003 in exile in the UK, after coming to the country on a scholarship.

Following Saddam's removal after the 2003 invasion (opposed by the Communist Party), the party enjoyed something of a resurgence and although it never regained the influence it previously enjoyed, it is still a presence in Iraqi politics in a way that other Middle Eastern communist parties could only envy.

Despite this, the party still maintains a level of discretion - the internal party structure and membership is secretive. The longstanding perception of communists as atheists and their public criticism of well-connected business interests has made life very difficult in a highly religious and highly corrupt landscape, and the party has had to endure repeated attacks on its offices and the murder of its leaders.

Last year, seven anti-corruption activists with the Civic Movement (a number Communist party members) were kidnapped by unknown gunmen. Although the group were later released, the culprits were never found - though one activist told MEE there were "many corrupted powerful men who could be happy to see them out of the political scene".

Members of the Sairoon Alliance have also faced threats and intimidation - on Sunday, Iraqi media reported that Abbas Adel Khader, a lecturer at the Faculty of Management and Economics at Muthanna University and parliamentary candidate for the coalition, was shot at by a gunmen, who demanded that he withdraw his candidacy.

While few current Sadrists would publicly disagree with Sadr himself, former supporters of the Sadrist movement have been critical.

Bahaa al-Araji, a former energy minister whom Sadr forced to resign over corruption allegations, slammed the alliance, rhetorically asking on Iraqi TV in January how a party whose slogan was “Workers of the World Unite” could join with a party whose message should be to "send blessings upon the Prophet?"

"Today everyone who has the desire and the means to become prime minister is prepared to ally themselves even with the devil in order to gain the votes of the Iraqi people," he said.

The alliance also appears to have upset senior figures outside Iraq, including Iran, which has long had a tense relationship with Sadr, who resents Iran's overweaning influence in Iraq.

Speaking at an event alongside former prime minister Nouri al-Maliki - arguably the fiercest rival of Sadr - Ali Velayati, chief advisor to Iran's Supreme Leader Ali Khamenei, warned that “the Islamic awakening will not allow the return of communists and liberals to power.”

The intervention was condemned as interference in Iraq's domestic politics.

"Iraq is bigger than you! Iraq is not your state!" wrote Jassim al-Helfi, another Communist Party central committee member.

He also criticised Maliki, who has long been seen as close to Iran, for not speaking out against Velayati's comments.

"It is a legacy of the Iraqi officials, who sat humbly on the speech of Ali Velayati, violating the constitution, attacking political and intellectual pluralism by interfering in Iraq's internal affairs. Without any of them uttering one word of objection!"

The build-up to the elections has already been hit by controversy. Iraqi Prime Minister Haider al-Abadi, riding high after the defeat of the Islamic State group in Mosul, had been seen by many as the best hope of rooting out corruption and breaking the stranglehold of sectarianism in Iraqi politics.

It was a shock therefore when he announced on 14 January that he would be joining an electoral pact with the Victory Alliance, which consists of parties and politicians affiliated to the Hashd al-Shaabi, or Popular Mobilisation Units (PMUs), largely Iran-backed groups who have been accused of carrying out sectarian reprisals against Sunnis.

Sadr, who has repeatedly called for the PMUs to be disbanded, condemned the move as "abhorrent and sectarian" and within 24 hours the alliance had collapsed.

But the controversy dampened the belief that Abadi might move to challenge the controversial "sectarian quotas" system which has been one of the main demands of reformists in Iraq.

Under the current system, installed by the US following the 2003 invasion, ministers are appointed to different ministries on the basis of ethnicity and sect, in a fashion similar to Lebanon.

Although this system was never written into the Iraqi constitution, it has remained in place and has angered those who claim appointments should be overseen by the prime minister. But abolishing the system will prove difficult without enraging the highly influential political actors who currently benefit from the system.

"There were hopes, especially when [Abadi] announced this list of political reforms in September 2016, that he would be able to do something - but Abadi’s problem is his fluctuation and faciliation and indecision on the one hand, and the fact that he lacks a power base," said Ali.

"Unlike Maliki, who managed after eight years in powers to really build up his power base in the state, in the security forces, in the ministries."

No matter how assertive the communists and their allies may be, there are few who doubt that Sadr will continue to dominate the electoral alliance.

"There are reasons to be skeptical this will work out," said Kirk Sowell, publisher of the biweekly newsletter Inside Iraqi Politics.

"The secularists were never able to bring out large crowds without the Sadrists, and so they may be viewed as window dressing."

He also pointed out that even at their strongest, the Sadrists still had a hill to climb when it came to electoral success.

"We'll see, but remember that the Sadrist lists got 34 seats in 2014. So unless their alliance with the secularists brings 40-50 seats, this shouldn't be viewed as a big deal," he explained to MEE.

Iraq is still reeling from the defeat of IS and with about two million internally displaced people still to return to their homes, there are fears that the election could still be delayed or carried out in a less-than-representative fashion. There have even been reports of refugees being forcibly returned in order to ensure the elections take place on time.

Salam Ali said the coming months would be a "big political battle" but expressed optimism.

"This coalition is national, civil in character, it opens the possibilities of a change in the political scene in favour of reform of the system, it brings in a new dynamic in the political process and hopefully will give a boost to the protest movement as well," he said.

"And with this from above and below, as they say, this might - might - hopefully open up space for change." 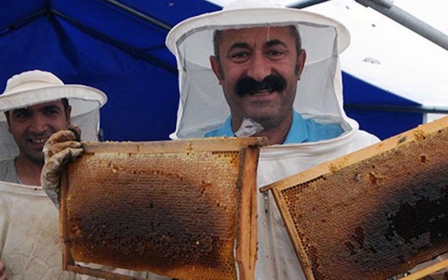