While non-Kurdish communities of Baghdad have accepted the Kurdish vote to separate from Iraq, they remain wary over the disputed areas 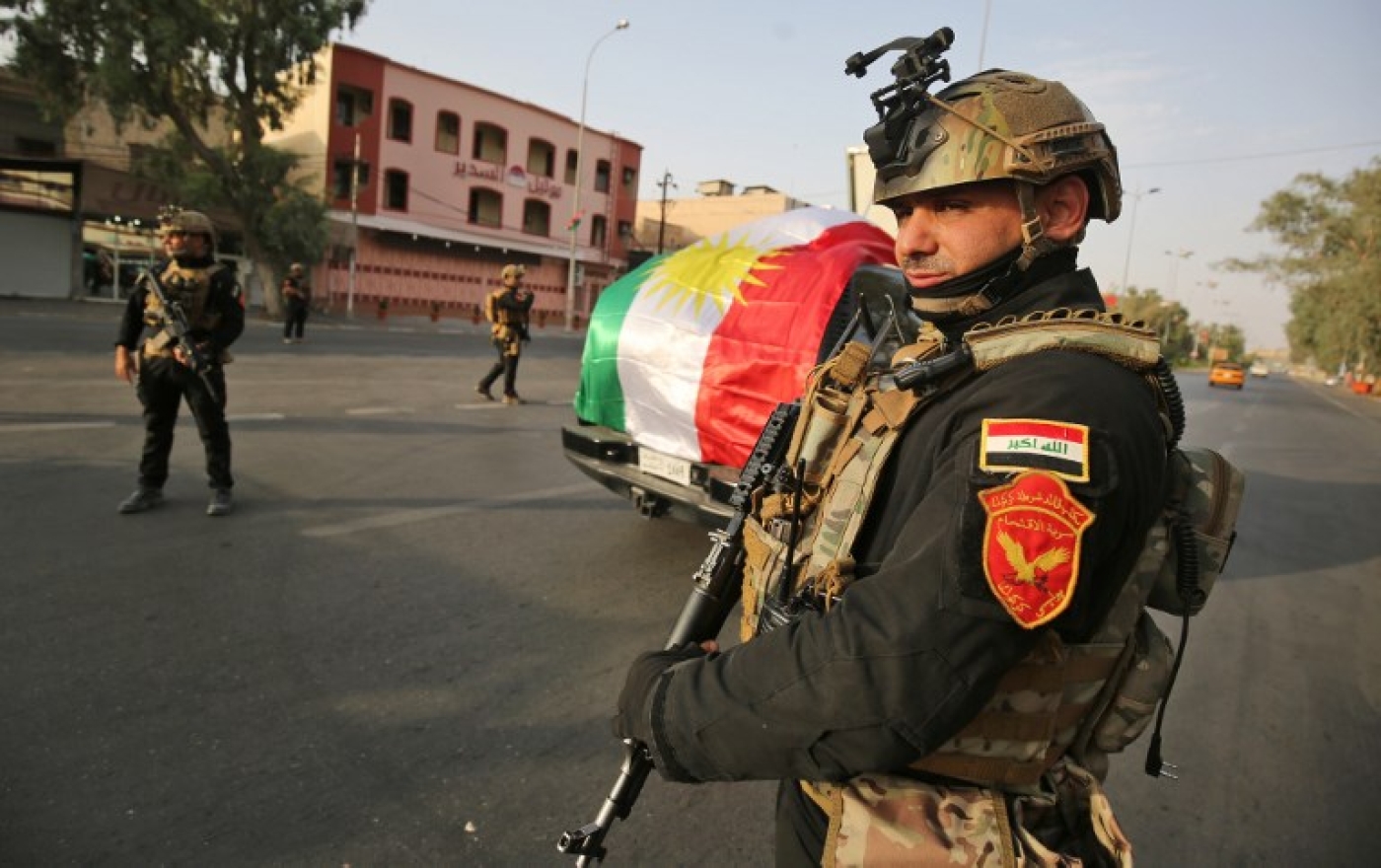 BAGHDAD – While many Arab Iraqis are angered by Kurdistan’s move to separate from Iraq, they are more concerned about the prospect of long-disputed lands such as Kirkuk becoming part of an independent Kurdistan.

"It would be good if they (Kurds) separated. No one will stop them or hinder their plan, but they must withdraw from all the areas they took over after 2003," Ameer Ali, a fighter of Assaib Ahl al-Haq, a prominent Shia militia fighting the Islamic State in Iraq told MEE.

"We fought Daesh [Arabic acronym for IS] and they are almost gone. We are ready to fight the Kurds if if needed to retrieve our lands," Ali said firmly.

'We fought IS and they are almost gone. We are ready to fight the Kurds if needed to retrieve our lands'

But there has been no sign of a referendum - which saw over 92 percent of those who took part in the vote support Kurdish independence from Iraq – having taken place.

Although the mostly Arab Sunni and Shia communities in Baghdad have accepted that the Kurdish region in northern Iraq is quickly moving away from Baghdad’s grip – despite the Iraqi government taking strong measures to oppose it – there remains a lot of anger when it comes to disputed areas that have been an issue of disagreement between the Kurds and Arabs since 2003.

'Stabbing us from behind'

Ahead of the vote, Iraqi Prime Minister Haider al-Abadi demanded that the Kurdistan region suspend its plan to hold the Kurdish referendum after the country's Supreme Court ordered its suspension, deeming it “unconstitutional”.

Baghdad has since retaliated by imposing an air ban on all international flights to and from the autonomous region, while also filing a formal request to Turkey and Iran to close the borders with Kurdistan.

The reaction of non-Kurdish Iraqi citizens has been a lot more accepting however with many saying that Kurdistan’s move towards independence began years ago.

"Since 2003, we have not felt that Kurdistan is a part of Iraq," Muntadhar Zayer, a 25-year-old taxi driver in Baghdad told the Middle East Eye.

Kurds faced decades of brutal repression by Arab-led governments in Iraq before acquiring de facto autonomy following the 1991 Gulf War, a move that was strengthened since the 2003 US invasion. This region included three provinces Erbil, Duhok and Sulaimaniya which created the basis for Kurdish self-rule, later known as the Kurdish Regional Government (KRG).

"The Kurds have been sharing with us all the benefits of being affiliated with this land, but they haven’t been experiencing the suffering linked to it," Zayer said with a bitter tone.

"What do you expect of them but to become a dagger that stabs us from behind,” said Zayer as he sat behind the steering wheel while waiting in a queue at a security check point in central Baghdad.

"Suddenly, we became the enemy which has to be fought. They (Kurds) do not even feel honoured to drape the Iraqi flag on Talabani's coffin," he said, referring to the funeral of Jalal Talabani's which took place in Sulaimaniya last week.

Talabani, leader of the Patriotic Union of Kurdistan (PUK) and former president of Iraq, died on 3 October aged 83, after slipping into a coma in Germany.

Since early September, tensions have risen in areas liberated from IS by KRG forces outside the region's original 2003 borders, including the city of Kirkuk.

The KRG's president, Massoud Barzani, said at the time that "any attempt to change the reality using force" in Kirkuk "should expect that every single Kurd will be ready to fight".

Areas bordering the Kurdish region defined by article 140 of the Iraqi Constitution, had been recognised by the UN, Baghdad and the KRG as disputed areas that were subjected to demographic changes as a result of Arabisation policies under Baath rule which saw Kurdish villages razed and thousands displaced.

Iraqi Kurds have since tried to extend their control over many of those areas, most notably Kirkuk, saying they are simply redressing historic wrongs perpetrated by successive Iraqi leaders, particularly Saddam Hussein.

'If Kurds want to go, they can go, but they can have nothing to do with the disputed areas'

The KRG drove out the Iraqi security forces from Kirkuk, effectively gaining control over the city and its nearby oil fields in June 2014. Both the Peshmerga and Hashd forces have since maintained a strong military presence in several disputed territories, including Kirkuk province.

Arab communities have felt strongly about this believing the lands should remain the home to a Christian, Yazidi, Shabak and Turkmen communities displaced by IS.

"If Kurds want to go, they can go, but they have nothing to do with the disputed areas," Hussain al-Zergani, an Iraqi civil servant told MEE.

"Since we were born, we’ve been fighting one war after another," Ammar Hakim, a constructor worker from the Sadr City, home many Shia militias told MEE.

"We started our life experiencing the Iran-Iraq war. It will be no big deal if it ends with an Arab-Kurdish war," Hakim added.

Bouts of unrest have since spread across in some of the contested border regions with local Arabs pulling the KRG flag from a council buildings in Diyala, and staging armed, albeit peaceful, protests in the town.

As reported before the vote, Jutyar Mahmoud, a member of the region's independence referendum commission, told Middle East Eye that disputed territories such as Kirkuk were the focus of fears of a new conflagration after the referendum.

"We will face border problems in the near future and I definitely think there will be another war, and soon," he said.

Like other Arab Iraqis, Zayer the taxi driver believes that the Kurds exploited Baghdad's preoccupation with the fight against the Islamic State, by attempting to impose a new reality in the areas adjacent to the borders of the Kurdish region.

These areas include Sinjar, Zumar, Hamdaniya, Sheikhan, Talkeif, Makhmour, Hawija, Dibiss, and Daquq, among others.

"What really frustrates me is not their (the Kurd’s) eagerness to separate; who cares if they stay or leave. It’s the timing of all this [that frustrates me]," said Mohammed al-Shimari, a member of the Shia-dominated Popular Mobilisation Units (PMU) who was spending his holiday with his family in Baghdad.

'We will face border problems in the near future and I definitely think there will be another war, and soon'

"They (Kurds) think we are too busy fighting those damned Daesh and cannot stop them," Shimari told MEE.

"If it was up to me, I would just let them go, but just with their three provinces," he said as he pulled out a cigarette from his pocket and placed it between his lips.

Kurdish movements began taking over towns and villages across the ethnically mixed ribbon of land that divides the autonomous Kurdish area in the north of Iraq from the Arab-majority part in the south. As the Peshmerga – Iraqi Kurdistan’s fighting force – battled IS, many Arabs were forced from their homes.

Most of these areas had been totally or partially seized by IS in June 2014 when the Iraqi army had dramatically collapsed and almost a third of the Iraqi territories had fallen into the hands of the militants.