In leaked video, head of party's military wing in Taiz also claims Turkey will provide weapons for the offensive 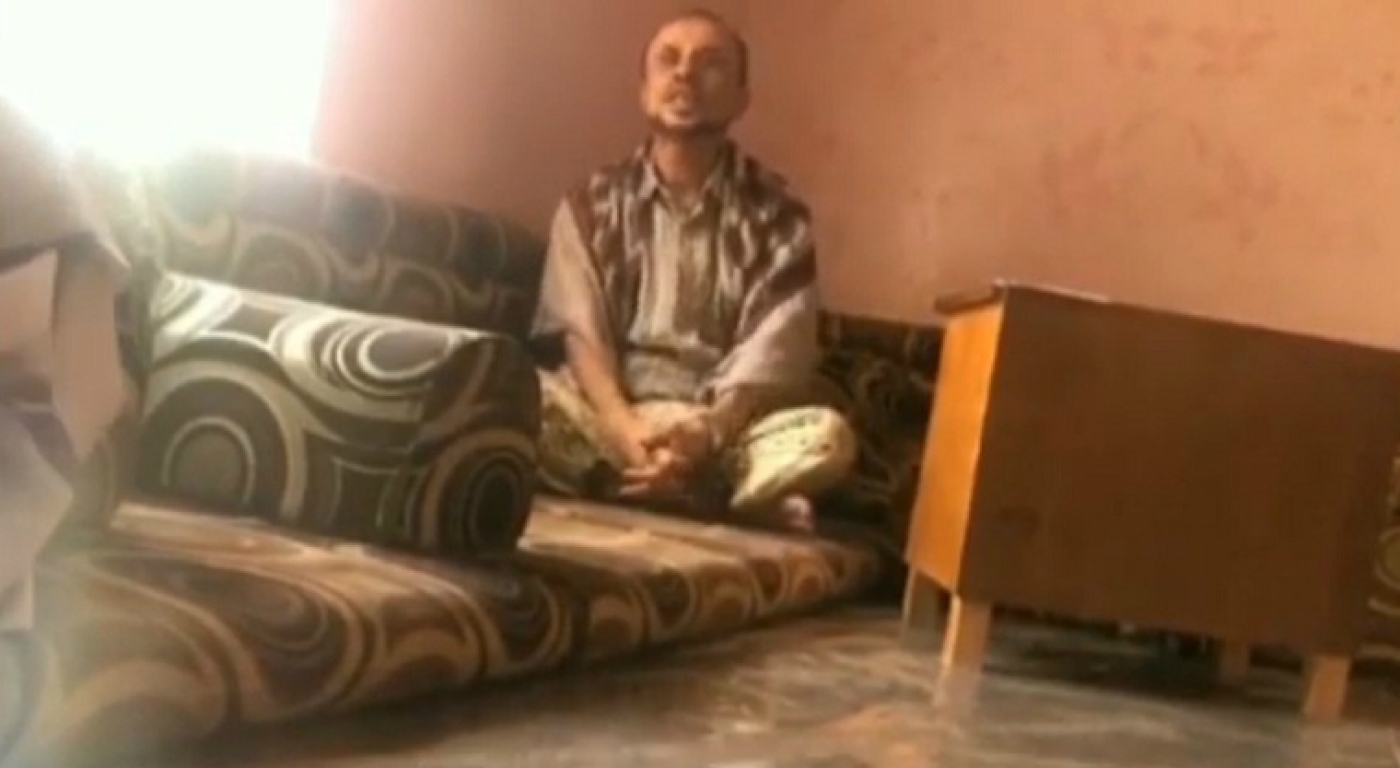 In the video, Salem is seen mocking Saudi Arabia's inability to defeat the Houthis (screenshot)
By
MEE correspondent
in
Sanaa

A leaked video has thrown into sharp relief the divisions between Yemen's Islah and Saudi Arabia, even if the leadership of the Muslim Brotherhood-affiliated party has yet to make a formal announcement of the split.

In the video, leaked on 1 August, the leader of Islah's military wing in Taiz province mocks the Saudis as "mice" and says that Islah is planning to launch attacks against UAE-backed force in Mocha.

Coupled with recent statements by other Islah leaders, it reflects the reality that the party's one-time alliance with Riyadh is over, and that Saudi Arabia is now considered an enemy whose actions have failed to lead Yemen to peace. Discussing the planned attack in the video, Abdu Farhan Salem says: “Mocha is ours. They said ‘Turkey will provide us with weapons and those [Saudi-led coalition forces] will become mice’.”

Mocha, a port city on the Red Sea coast located in Taiz province, is currently under the control of Tareq Saleh, a nephew of the late president Ali Abdullah Saleh, who is seen by many as responsible for hundreds of deaths in Taiz.

Saleh's National Resistance Forces (NSF) are heavily backed by the UAE and there has been recent fighting between pro-Islah fighters and NSF fighters in Taiz.

In the leaked video, Salem is also seen talking about possible Turkish intervention in Yemen, with Ankara supplying Islah with weapons, a rumour that has been floated in various media outlets.

"If advanced countries intervened, I swear they [the Saudi-led coalition] will be defeated,” he adds, in reference to a possible Turkish intervention.

The Islah party was blacklisted by Saudi Arabia in 2014 over its affiliation with the Muslim Brotherhood.

Saudi Arabia led a Western-backed military coalition, including the UAE, that intervened in Yemen in 2015 to restore the government of President Abd Rabbuh Mansour Hadi.

Hadi had been kicked out of power in the capital, Sanaa, by Houthi rebels in 2014 and Islah agreed to help the Saudi-led coalition against the Houthis.

However, the UAE's attempts to extend its influence in the country has seen many Yemenis consider them a bigger threat than the Houthis.

Neither the Islah party itself, nor Yemen's government, has commented on Salem's video, but many Islah members welcomed the remarks, saying they believed they represented the views of the membership.

“I agree with what Salem said in the video about Mocha belongs to Taiz, and the Saudi-led coalition failing to defeat the Houthis,” said Qadhi on his Facebook page.

Gamal al-Yousofi, a member of the Islah party in Taiz, stressed that the video of Salem had been edited and that it was a discussion in his house with his men, rather than an official statement.

However, he told Middle East Eye: “I agree that Mocha belongs to Taiz and we hope that our army can advance to liberate Mocha from the UAE-backed forces as they are trying to separate Mocha from Taiz. “The UAE-backed forces left Taiz city under the Houthi siege and went to liberate Mocha, however they are only looking to take the wealth of Taiz province.”

Yousofi said most of Taiz's residents welcomed Salem's video and they were even willing to participate in any battles to recapture Mocha.

“Salem represents us and really the Saudi-led coalition failed to help us, so there's no way now but to fight to recapture the whole province, either from the Houthis or from Tareq's forces,” he said.

“Salem is a field fighter and he was one of the founders of the Popular Resistance in Taiz.

“He doesn’t hide behind social media pages like other military leaders, but is always on the frontlines, so definitely we will follow such a leader.

“The Saudi-led coalition disappointed Yemen and it didn't work to return legitimacy [the president and his government] but to destroy Yemen,” Yousofi added.

'We are paying the cost of our stupidity'

Meanwhile, anti-Islah activists have presented the video as evidence that Islah is planning to attack UAE-backed forces rather than fighting the Houthis.

Some people pointed out that in the video Salem said “the Houthis are with us now” but it was clear that he was was joking.

The fighting in Taiz province against the Houthis has ceased now on several fronts and there have been no recent advance for either side, but there are sporadic clashes from time to another between the UAE-backed forces and Islah fighters.

'The UAE wanted to control the coast for its own purposes and not as part of liberating Yemen from the Houthis, so we consider UAE as an enemy trying to loot our wealth'

Many residents in Taiz welcomed Salem’s statements as the UAE has taken over their only seaport and brought forces from the south and the north to Mocha.

Speaking to MEE, Mahmoud Aref, who lives in Taiz city, said: “The coalition advanced from Aden to Mocha and liberated the whole coast of Taiz, but they didn’t break the siege on Taiz city.

“The UAE wanted to control the coast for its own purposes and not as part of liberating Yemen from the Houthis, so we consider UAE as an enemy trying to loot our wealth.”

Aref said Yemen's army in Taiz had been fighting the Houthis fiercely since 2015, but in many cases the Saudi-led coalition had failed to support them in liberating the city.

“We were stupid to believe that Saudi Arabia wanted to liberate Yemen from the Houthis and today we are paying the cost of our stupidity," he said.

“However, we trust in leaders like Salem to recapture the whole province and we don’t want any country to intervene in Yemen.”

Salem's comments on Turkey have given fodder to anti-Islah people who accuse the party of working with Ankara to fight the Saudi-led coalition.

Abdulghafour Muharam, a teacher who participated in the fighting against the Houthis and is a supporter of coalition, told MEE: “Salem confirmed that they work with another country to fight the coalition, which is a kind of mercenary action as Turkey isn’t involved in the Saudi-led coalition. “Only the coalition countries had permission to intervene in Yemen as their intervention came after a request from the president. Any work with any other countries is mercenary.”

Muharam said Salem's remarks about Turkish support should be investigated as he is a military leader and he would not be giving out inaccurate information.

“We heard about the Turkey intervention from different media outlets but we considered it a rumour,” said Muharam.

“But now this is a statement from a military leader and should be taken into consideration.”

There have also been rumours over the last month that Islah had sent sent Yemeni fighters to Turkey from where they had left to fight in Libya.

Muharam said he was also angered that Salem had announced he would launch a new front against the Saudi-led coalition in Mocha.

“Mocha is under the control of the Yemeni government and it was liberated by Yemeni forces backed by the Saudi-led coalition, so we should thank the coalition for this support," he said.

'Salem incited his supporters to unite against the Saudi-led coalition, and he mentioned Turkish support, so president Hadi should investigate this and stop Islah from destroying Yemen'

“It seems that Islah has stopped fighting the Houthis and they are planning to open new fronts against the coalition, which supported them to liberate several areas.”

Muharam said he believed that Hadi should intervene to stop Islah as there may be hidden supporters of the party who could create chaos in the liberated areas.

“Salem incited his supporters to unite against the Saudi-led coalition, and he mentioned Turkish support, so president Hadi should investigate this and stop Islah from destroying Yemen.”

Muharam added that the leaked video had destroyed all attempts for a peaceful resolution to Yemen's conflict.

“While the United Nations and Saudi Arabia are trying to find a peaceful solution to Yemen's war, Islah has hidden plans,” he said.