People are evacuated from Brussels airport in Zaventem on 22 March, 2016 following twin blasts claimed by IS (AFP)
By
MEE staff

Police have launched a string of raids across Belgium in response to Islamic State-claimed attacks that rocked the country's capital on Tuesday, killing at least 34 people and wounding 200 others.

In the wake of the assaults much of the capital remains on lockdown, with the British government warning its citizens not to travel there, and security beefed up at transport hubs and large venues across the United States.

The Islamic State's AMAQ news agency said that fighters from the group had “carried out a series of bombings with explosive belts and devices on Tuesday".

The attacks ripped through an airport and a metro station on Tuesday morning, prompting security to be stepped up and transport networks suspended, bringing the city to a standstill.

Two suspects in the airport attacks, caught on CCTV footage prior to the blasts, are thought to have been killed but police are "actively looking" for a third attacker, the federal prosecutor said.

Police said that they have discovered a bomb containing nails, various chemicals and an Islamic State (IS) flag during one search of a property in Brussels.

The chaos began just before 08:00 local time on Tuesday, when two explosions tore through the check-in area at Zaventem Airport, near to the American Airlines desk.

Gunshots were heard just beforehand, and the first blast reportedly sent panicking travellers towards a second, larger explosion that brought down ceilings and sent a thick plume of smoke into the sky.

Some 70 minutes later, another blast hit the Maalbeek metro station, close to the European Parliament, during rush hour.

"What we feared has come to pass. Our country has been struck by attacks which are blind, violent and cowardly," he said.

A witness at Maalbeek told Belgian broadcaster RTBF: "We felt an explosion which appeared to come from the front of the train. There was a lot of smoke. The glass doors were blown out. The explosion must have been enormous."

Belgian broadcaster VRT has reported that 20 were killed on the train and 14 at the airport, although those figures have not been confirmed by the government.

The attack comes days after a key IS suspect, Salah Abdeslam, was captured and wounded in the Belgium capital in a dramatic raid.

Abdeslam has been wanted in connection with the IS-claimed attacks in Paris last November, which killed 130 people.

Hours before the official claim of responsibility, many IS social media accounts claimed that Tuesday’s attack was a response to Abdeslam’s arrest, according to BBC media analyst Mina al-Lami.

The foreign minister, Didier Reynders, said authorities feared that suspects involved in Tuesday's attacks could still be at large.

Authorities have now released the first images of the airport suspects, with Belga news agency posting a grainy picture showing three men pushing trollies with suitcases past the check-in area.

Two have dark hair and one is wearing a hat. Two are believed to have died in the blast, while the third is suspected to be on the run.

On Monday, authorities launched a manhunt for Najim Laachraoui, a 24-year-old IS operative suspected of making bombs for the Paris attack. However, there have been no fresh updates about his whereabouts.

While some transport began to reopen at 16:00 local time (1500 GMT), the country remains on the highest possible alert level with authorities vowing to step up security in the capital and beyond, and armed troops and police out in force.

Many victims of the Maalbeek bomb were rushed to the city’s St-Pierre hospital – where Abdeslam was treated at the weekend.

"It’s a horrible thought," Luc Martin, a 52-year-old father of three who had just visited a family member inside the St-Pierre hospital, told Middle East Eye.

"Numerous ambulances have been pulling up outside the emergency ward since first thing this morning. They are doing everything they can to save people."

"We were talking about Abdeslam last night – it seems incredible that he was being looked after by the same people," he added.

The attack has sparked international outrage with world leaders pouring in to show their solidarity and express their support for Belgium.

Leaders of the 28-member EU bloc said the Brussels bombings were an “attack on our open democratic society”.

French President Francois Hollande said that “the whole of Europe has been hit” and urged the continent to take "vital steps in the face of the seriousness of the threat".

"The despicable attacks today struck at the heart of Belgium and the centre of the European Union," said a statement from his office. "The secretary-general hopes those responsible will be swiftly brought to justice."

Peter Allen in Brussels contributed to this report. 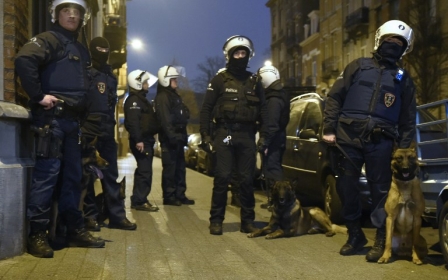