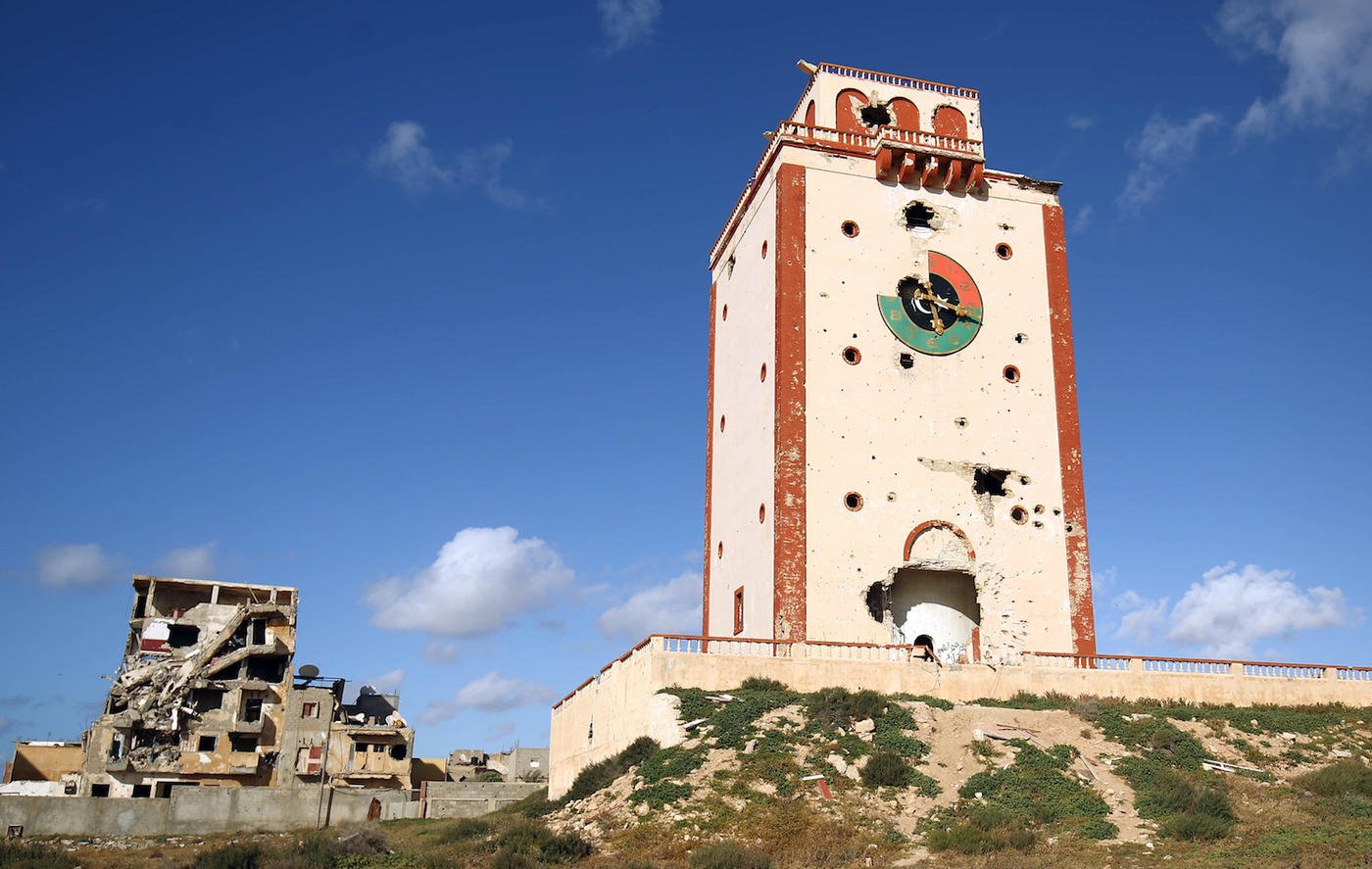 The Islamic State (IS) group has carried out an attack in Libya's southern desert, raising fears among local residents who say the militants are taking advantage of a security vacuum created by rival government forces now fighting in Tripoli to regroup.

The head of al-Fugaha's local council, Ahmed Sewessi, and a senior local security official were killed on Monday night after a convoy of IS vehicles entered the town, while the militants also set Sewessi's house ablaze.

IS media outlet Amaq swiftly released a statement claiming responsibility for the attack.

"This was the second IS attack in our town. The first was six months ago, when they killed one of Mr Sewessi's sons and kidnapped another," al-Fugaha resident Abuzeid*, 45, told MEE.

"His kidnapped son was only recently freed when the LNA rescued a number of IS hostages in [the southern town of] Murzuq," he said, referring to the Libyan National Army, loyal to Libya's eastern-based government and led by Khalifa Haftar.

"Then, last night, they killed his father." Approximately 150km south of Hun and 100km north of Sebha, al-Fugha is expected to soon become a ghost town.

Abuzeid said around 30 percent of the town's residents had already fled, and he predicted that the town's entire population would soon leave, amid growing fears that clashes near the capital Tripoli are creating a security vacuum.

Fighters aligned with the UN-backed Government of National Accord (GNA) are currently locked in combat with Haftar's LNA forces, loyal to a rival government based in eastern Libya.

"We're very unhappy with the current situation. No-one wants to stay in the town anymore because it keeps being attacked and there are no security forces in the area," Abuzeid said.

"This chaotic situation in Libya will only increase the presence of IS here in the south and enable them to carry out further attacks."

In the days leading up to the attack in al-Fugaha, local residents in areas formerly occupied by IS told MEE they were terrified that the deployment to Tripoli of forces loyal to Libya's rival governments would facilitate a regrowth of IS.

"Everybody is focusing on Tripoli and western Libya now, and we are terrified that IS will use this opportunity to seize control of Libyan territory again," Mohamed*, a resident of a small village east of Sirte, said over the weekend.

"This is exactly what happened in late 2014 and early 2015, when Misrata and the LNA were fighting each other in Benghazi and around the oil export terminals in central-coastal Libya. Everyone ignored the threat of IS then and, within a few months, IS had full control of Sirte."

Even before Monday night's attack on al-Fuqha, local residents said they were seeing early indications of IS gaining power and capabilities.

'This is exactly what happened in late 2014 and early 2015 ... Everyone ignored the threat of IS then and, within a few months, IS had full control of Sirte'

"IS have been regrouping since losing Sirte but, since October last year, we've seen them change their tactics from hiding and defending themselves to staging attacks and making their presence known," said Sirte resident Ahmed*, 51.

He cited several attacks in the area of al-Jufra, south of Sirte, and another on a remote village amid the country's southern oil fields, as well as an attack in December last year on Tripoli's Foreign Ministry.

"There is a very large presence of IS and other terrorist groups occupying remote areas surrounded by difficult terrain. There are enough IS members in Libya now for them to be able to reinstate themselves," said Ahmed.

He said the militant numbers have grown as a result of a new "policy" employed by the group in Libya to welcome new members even if their ideologies were not completely aligned with those of IS more generally.

"We've heard they've started allying with al-Qaeda members, who are present in large numbers in the south, especially in the town of Ubari," he said.

A strategic town lying near the El-Sharara oilfield, long outside any government control, Ubari was recently taken by Haftar's forces.

"There are also a large number of missing forces from the Benghazi Defence Brigades," Ahmed said, referring to a militia force mostly comprised of al-Qaeda-affiliated armed groups who fought against the LNA starting in 2014.

"Following their defeat in Benghazi by Haftar, [the forces] fled to the same desert and mountainous areas where IS have been hiding. We have heard nothing of those forces for a long time, and we don't know who they are now aligned with or what they are planning," he said.

IS regrouping in central Libya has long been on the cards. Although the group was technically defeated in late 2016, even before the battle for Sirte began, locals reported that senior IS emirs had fled the city.

One of Sirte's most senior Libyan emirs - Abdul Hadi Zargoun - reportedly even faked his own death to enable him to lead IS regrouping operations in greater secrecy.

Islamic State in Libya: Fighters are regrouping in the lawless desert
Read More »

Battle-weary Misrata-led forces who defeated IS in Sirte did not attempt to pursue IS south of the town, enabling fighters to regroup in remote and hard-to-reach areas, again largely unchecked.

Misratan commander Colonel Ali Faida, former head of the Libyan forces securing Sirte, told MEE last summer that his forces were under constant threat from IS, suffering regular and repeated attacks, but that they lacked suitable vehicles and military supplies to pursue militants beyond the borders of Sirte.

Faida survived an assassination attempt in the town in November.

Fertile ground for IS

The regrowth of IS in Libya is not just a local enterprise, but it is part of the group's efforts to rebuild in the aftermath of huge territorial losses in Iraq and Syria.

According to a report published by the International Centre for the Study of Violent Extremism, Syrian IS commander Ali Moussa al-Shawakh (also known as Abu Luqman) was in the Sirte region in March 2017 to strengthen IS in North Africa.

"Abu Luqman might have travelled to Sirte to establish another Emni [IS security and intelligence wing] committee in Libya. ISIS currently seems to be on the defeat in Syria and Iraq and is assessing its next moves," the 2017 report said, using an alternative acronym for IS.

"Having an operations base for the Emni in Libya is especially dangerous given the smuggling routes from Libya and North Africa in general, to Europe, and the access it could provide ISIS in plotting and conducting terrorist attacks in European cities."

Abu Luqman was reportedly killed in Syria in 2018. Alive and kicking: Sirte rebuilds from the ruins of war with IS
Read More »

IS fighters met with Iraqi and Syrian commanders before, in Sirte, as well as with homegrown militants who had received military training and battlefield experience in Iraq from 2003 onwards, and in Syria as of 2011.

Unknown numbers of young Libyan revolutionaries were deployed to fight against the Syrian government in 2012, mostly under a brigade - Liwaa Al-Umma - headed by Libyan-Irish revolutionary commander Mahdi al-Harati.

Other Libyans with a history of militancy, especially from the Sirte region, also travelled to Syria on their own and were indoctrinated by IS. They then brought home the group's ideologies, recruited new members and paved the way for IS's takeover of Sirte.

Militants have long taken advantage of Libya's complex series of post-2011 civil conflicts and, since 2014, IS has become one of the principle beneficiaries of the country's ongoing instability.

Civil conflicts across Libya since 2014, mainly between forces loyal to the country's eastern-based government and several unelected Tripoli-based governments, enabled IS to grow unchecked in early 2015.

Meeting comparatively little military resistance, IS swiftly grew from small groups of militants to a committed IS wilayat, controlling Qaddafi's former hometown Sirte and a 200km stretch of Libyan coastline, which formed the group's only Mediterranean base.

Now, IS's regrouping operations are said to be largely undertaken in mountainous areas near the town of Bani Walid, a bastion of pro-Qaddafi sentiment, and desert areas in and around al-Jufra.

The LNA is the only official force to have made any meaningful efforts to counter IS growth and operations in central Libya, making key advances and carrying out successful anti-IS operations in al-Jufra.

But they have been beset by the same problems faced by Misrata's forces - namely the difficult terrain afforded by mountainous areas and the vast expanse of desert where IS has long been operating.

Anti-IS operations in al-Jufra also appear to have been relegated to a back-burner while Haftar focused on taking control of swathes of Libya lying further south than al-Jufra earlier this year.

'The war in Tripoli and troop movements towards the capital have facilitated IS gaining more power, especially in southern areas now abandoned by Haftar's forces'

The new military focus on Tripoli has prompted another shift of forces and, in the last month, most LNA units in the south were moved north and north-west. Local residents say this strategy has left Libya's desert south again largely insecure.

Haftar's LNA forces had received a mixed reception in the south, and considerable opposition from the southern Libyan Tebu tribe.

However, after the initial jubilation in response to an official military presence in an area long outside any government control, even in towns which originally welcomed Haftar's troops, the cracks are already starting to show.

"The south now is really a mess because the LNA has effectively pulled out and headed north. Unknown armed groups are taking revenge on those who supported LNA and this is a hard lesson learned by Haftar's supporters, some of whom have been beaten or kidnapped," said another Sirte resident, Mahmoud*.

"Within just a few months of the LNA's southern advances, chaos has returned to Sebha," he said, also only using his first name for fear of reprisals.

Libya's south has long been a free-for-all, with local militias only able to keep a modest check on rampant people-smuggling and organised crime.

The country's porous southern borders have also long been one of the main ways IS has brought in new members, disguised as ordinary economic migrants or refugees, using well-trodden people-smuggling routes.

"The war in Tripoli and troop movements towards the capital have facilitated IS gaining more power, especially in southern areas now abandoned by Haftar's forces," Mahmoud said.

*For security reasons, residents who spoke to MEE only wanted to use their first names.