With Netanyahu seeking to reveal his scheme to unilaterally annex parts of the West Bank this week, MEE looks at what you need to know 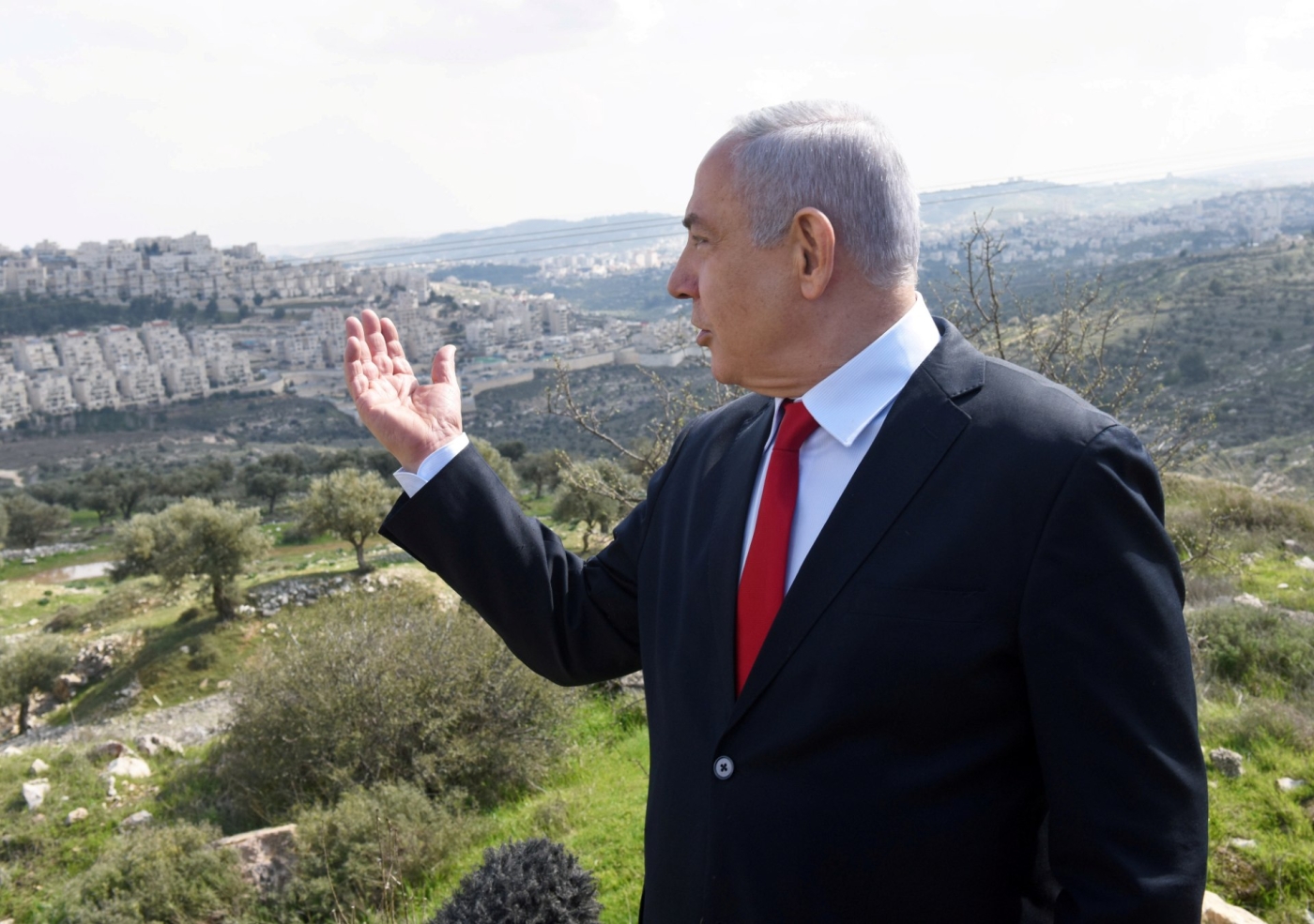 The Israeli government has suggested that plans to annex parts of the occupied West Bank could be revealed from 1 July.

Such a move has been condemned by Israel's allies and rivals alike as a dangerous escalation that could destabilise the Middle East.

Middle East Eye answers some key questions about what Israel is seeking to do, and what could happen next:

What does the Israeli government want?

Unclear. Broadly, Prime Minister Benjamin Netanyahu’s government has said as much as 30 percent of the West Bank could be annexed, including blocs of illegal settlements, the strategic Jordan Valley and the northern Dead Sea.

Expectations that such a large-scale annexation will be announced at once should be tempered, however.

Officials have hinted to the Israeli media that annexation could be applied in stages in an attempt to placate neighbouring Jordan, whose King Abdullah II warned it could lead to “massive conflict” and has reportedly refused Netanyahu’s calls.

What are the possible scenarios?

Several possible plans have been mooted, all of them disastrous for the Palestinians.

The first would annex all of the West Bank’s Area C, the part fully controlled by Israel under the Oslo Accords. That would include all illegal settlements, which hold some 400,000 Israeli settlers, and the Jordan Valley.

In the third scenario, Israel would annex the major settlement blocs of Maale Adumim, Ariel and Gush Etzion, which together have a population of around 85,000 Israelis. Maale Adumim sprawls between occupied East Jerusalem and the West Bank, Gush Etzion lies over the holy Palestinian city of Bethlehem and Ariel sits in the middle of the territory, overlooking Nablus.

Annexation of these areas would sever many parts of the West Bank from Jerusalem and Bethlehem, and create Israeli enclaves in the heart of any future Palestinian state.

The third option is currently the most likely. 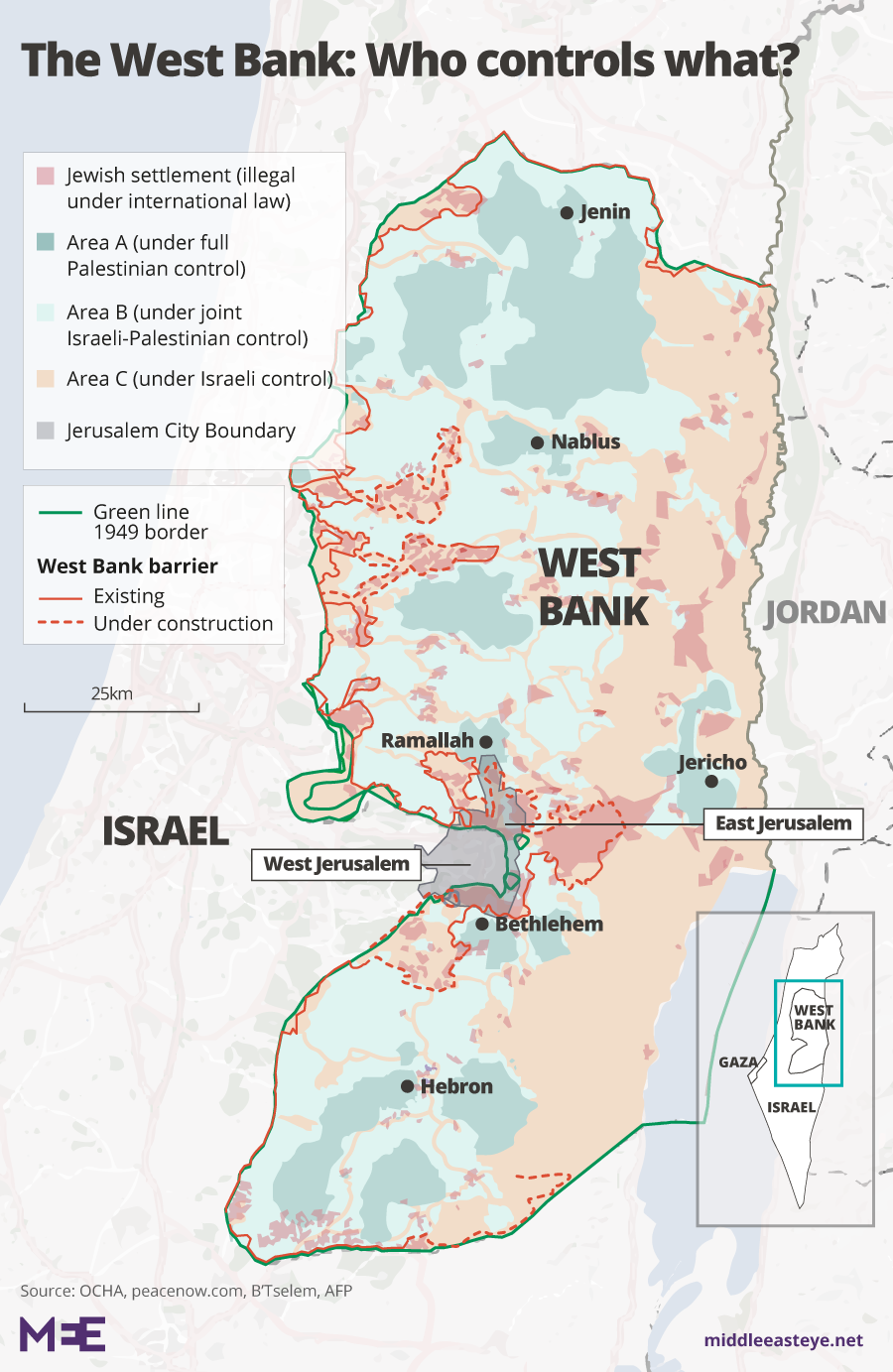 When could annexation happen?

According to the coalition agreement signed by Netanyahu and his rival-turned-defence minister, Benny Gantz, annexation legislation could be proposed as early as Wednesday.

That would just be the beginning of a legislative process, however, with the draft going through various committees and readings before being presented to Israel’s parliament, the Knesset.

Significant changes to the draft plan could be made in that process, which could take weeks, though it is likely that any proposal would have been agreed by enough parties in the government to see it go through parliament without too much trouble.

Absolutely not. Unilateral annexation of occupied territory is illegal under international law. The Israeli government prefers to term it as “applying sovereignty”, though that makes little difference legally. Legality hasn’t stopped Israel from annexation before, however.

Since the 1967 Middle East war, Israel has annexed occupied East Jerusalem and the Syrian Golan Heights in moves never recognised by the international community.

Essentially, any Israeli annexation would not change the territory’s status as militarily occupied.

What would happen to the Palestinians?

Unlike residents of East Jerusalem and the Golan, Palestinians in the West Bank will not be offered Israeli citizenship or permanent residency.

Were the Jordan Valley to be annexed, he said, the city of Jericho will remain under nominal PA rule, while other Palestinian towns and villages will live under Israeli security control.

Is the Israeli government in agreement?

No. Though Gantz has been vocally supportive of annexation, he has done so with several caveats.

On Tuesday, the defence minister said annexation will be delayed until the coronavirus pandemic has been overcome. Israel’s coalition government was ostensibly formed as an emergency administration to tackle Covid-19, after all.

Netanyahu has retorted that it’s not up to Gantz whether draft legislation will be presented or not, which is true. However its chance of getting off the ground is minimal without the support of Gantz’s MPs.

The defence minister has said any annexation must be done with the coordination of Israel’s international allies and partners, chief among them the United States.

Where does the US stand?

Washington is holding its cards close to its chest. Annexation was a key element of Donald Trump’s so-called “deal of the century” scheme to address the Israel-Palestine conflict. However, it was only to be carried out alongside moves towards creating an “independent” Palestinian rump state.

From the outside, it appears there are conflicting ideas within the Trump administration. David Friedman, the US ambassador to Israel, is staunchly pro-settler and has pushed hard to green light large-scale unilateral annexation. But this would effectively kill off Trump’s much-maligned but much-publicised deal, which was only revealed in January.

US officials were expected to make a statement outlining their position after consultations last week, but have so far held off from doing so.

Is the Israeli public supportive of the plan?

Annexation was a key manifesto pledge in Netanyahu’s last election campaign in March. It helped him win the most Knesset seats, but the prime minister fell short of a majority nonetheless, opening the door for his agreement with Gantz.

But even among Israelis who support annexation there are significant differences. The idea of a Palestinian state is anathema for Israeli settler leaders and other ultra-nationalists, who see all the land between the Mediterranean and Jordan River as Eretz Yisrael, Greater Israel.

That means gradual or reduced annexation alongside the implementation of Trump’s plan would be rejected by some quarters of Netanyahu’s voter base.

Opinion polls on the matter have been somewhat contradictory. One published on 7 June said 41.7 percent of the public oppose annexation as opposed to 32.2 percent in support. Yet an earlier poll suggested half of Israelis support the plan, though were divided about whether to do so without the backing of the US.

What has the Palestinian reaction been?

The Palestinian leadership and public have roundly and angrily rejected annexation.

President Mahmoud Abbas’s Palestinian Authority (PA) in May said it is cutting all agreements and understandings with Israel and the US. Though security coordination has largely been maintained, other bureaucratic ties have been severed, with deadly results. Medical transfers between the besieged Gaza Strip and Israel have been paralysed, and two critically ill infants died earlier this month, unable to get the treatment they needed.

The PA has also suggested it will tear up the Oslo Accords and declare independence in the event of any annexation.

In Gaza, Hamas officials have touted annexation as evidence that the Oslo process pursued by its rival Fatah has failed. Israeli security and military chiefs are concerned annexation could spark another war with armed factions in Gaza, though analysts told Middle East Eye that Hamas will likely wait to see how the PA reacts before making any moves itself.