Israel on edge as Palestinian citizens take to the streets again

Since 2000, 48 Palestinian citizens of Israel have been killed by police, compared to just two Jewish citizens 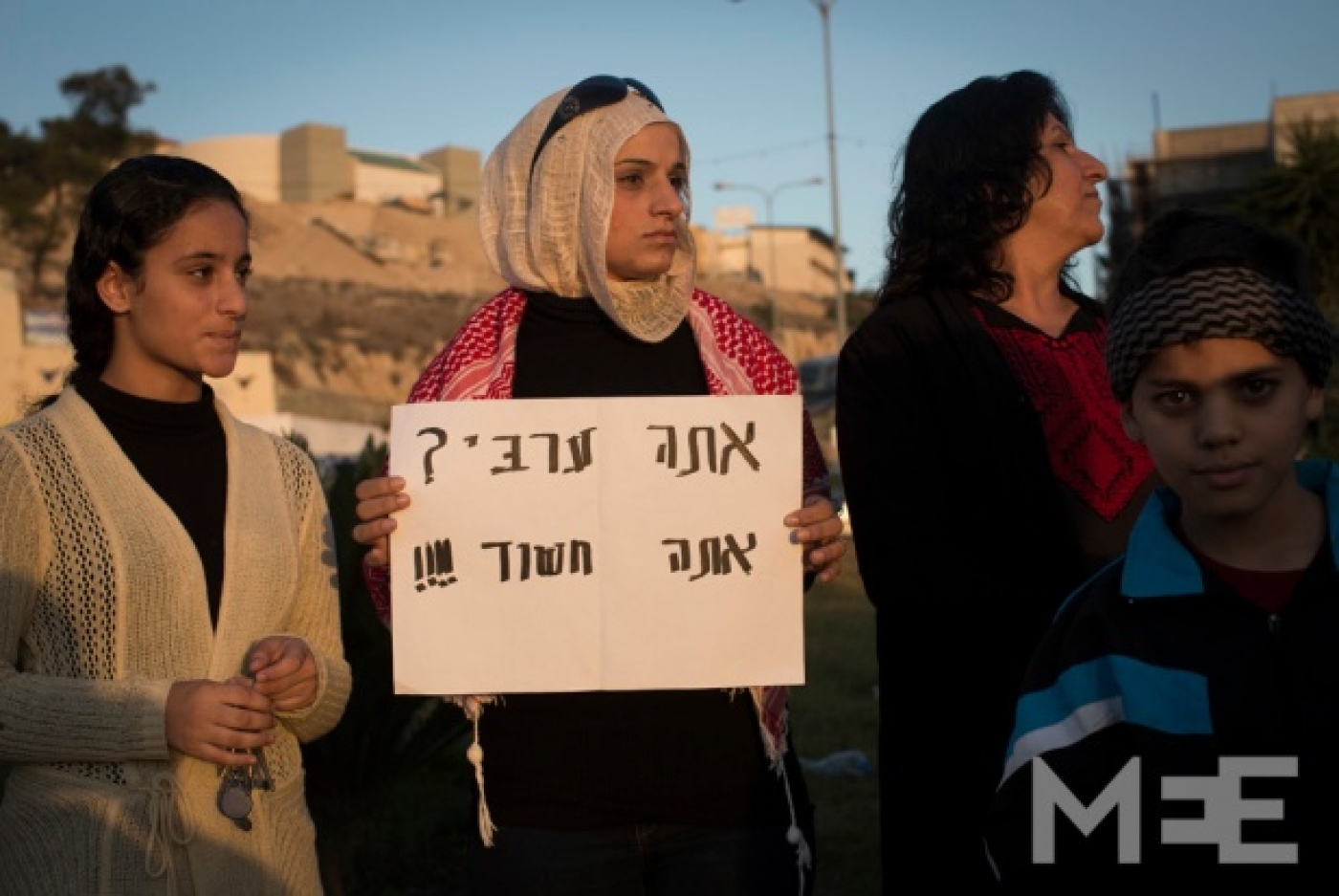 Palestinian woman woman holds a sign that reads: "You are an Arab? You are a suspect!" (MEE/Oren Ziv)
By
Bethan Staton

JERUSALEM: With turmoil in Jerusalem continuing at crisis level, fears have been high in recent weeks that the tensions would eventually spill over to embroil Palestinian citizens of Israel. For weeks, as almost nightly clashes gripped East Jerusalem the balance held, but on Saturday the deeply felt divisions finally exploded in the Galilee after police shot and killed Khayr al-Din al-Hamdan, a Palestinian citizen of Israel from Kfar Kanna, near Haifa in the north of Israel.

While police said they acted in self-defence, video footage quickly emerged seemingly contradicting their version of events leading up to the shooting of the 22-year-old.

Within hours of Hamdan's death the police made a statement justifying the killing: a young man, they said "attempted to stab police officers during the arrest of one of the residents. This is the reason he was shot.”

Authorities and politicians in Israel were quick to support the claims. “A frenzied Arab terrorist attacked our police officers with a knife in an attempt to kill them,” Economics Minister Naftali Bennet said in the Times of Israel. “The response of our police was what was expected of our security people.”

Local testimonies and security footage, however, soon began to paint a very different picture. In a CCTV film that appears to show the shooting, Hamdan is seen striking the doors of a police car with an object. But when an officer gets out of the car, he begins to run away – and it is at this point that he is shot, at point-blank range in the chest.

Even after Hamdan falls to the floor, the police officers continue to circle his fallen body with their guns drawn. No one attempts to administer first aid, and instead Hamdan, who appears conscious but badly wounded in the footage, is dragged on the floor before being bundled into the back of the van. Authorities have now pledged to investigate the matter.

“I heard four or five shots, but did not understand where they were coming from," Hamdan's father, Rauf Hamdan, told Israeli news service Ynet. "Only later did I see how he was killed in the video. They could spray us with tear gas or shoot us in the legs, but they have no heart."

Following the profound unrest that, in Jerusalem, has been repeatedly likened to an Intifada, Hamdan's death was the spark that provoked widespread demonstrations by Palestinian citizens of Israel. In towns and villages across the north, they took to the streets in protest on Saturday, clashing with police in some areas.

In Hamdan's hometown of Kafr Kanna some 2,500 people marched, while a hundred or more clashed with police. The protesters uprooted street signs and threw stones and Molotov cocktails, while the police responded with stun grenades, rubber bullets, water cannons and tear gas.

The turbulence continued into Sunday, although it remained peacefully in the vast majority of areas.

Vigils were held in Palestinian and mixed areas such as Acre, Haifa and the surrounding towns, with Palestinian citizens of Israel observing a two-day general strike that shut down the vast majority of shops including, government establishments like post offices. In Umm al-Faem some 100 protesters waved Palestinian flags and held banners, while in Kfar Kanna clashes with the police continued until nightfall.

Palestinians with Israeli citizenship, come from families that remained in what is now Israel after 1948. They constitute some 20 percent of the country's population and live predominantly in the northern area known as the Triangle and the southern Naqab.

It's a figure that many believe indicates a disproportionately brutal policy towards the minority population. When Hamdan was killed yesterday that impression was only further confirmed in the eyes of many Palestinian citizens of Israel.

“After this incident all the Palestinians are very angry about what happened. The police are deeply unfair,” Hamdan's sister told Middle East Eye. “They attack children. What they are doing is the real terrorism and its unacceptable.”

In Baqa al-Gharbiya in the Triangle, where protests and a strike took place this morning, the Popular Committee linked the death of Hamdan to the killing of local man Mahmoud Ghaniem, who was shot by a police officer in 2006.

The officer claimed Ghaniem had attempted to run him over in his car, despite evidence disputing that claim. “Our blood is one,” the Committee said in a statement published on news website Arabs48. “We know how it feels when the police kill someone without a reason. And we know that the Israeli state stands with the police, and not with the victims.

“The Israeli authorities have to stop and to listen seriously to the Palestinian voices speaking against killing Hamdan so this kind of incident not happen again," the statement added. "This murder could have been any of us.”

Across the country, however, the response from authorities appeared to stick to familiar hardline rhetoric, with strict policing and multiple arrests. Saturday night Israeli Police Chief Yohanan Danino ramped the national alert level to one below the highest, and deployed extra police in the north, blocking some exit roads to towns where unrest was taking place.

In Kfar Kanna alone at least 24 youths were arrested today, many of whom were under 18. Prime Minister Benjamin Netanyahu, meanwhile, announced that he would consider plans for the removal of citizenship for those who called for “destruction of the state of Israel”.

“We will not tolerate disturbances and rioting. We will act against those who throw stones, block roads and call for the establishment of a Palestinian state in place of the State of Israel,” he said. “Whoever does not honour Israeli law will be punished with utmost severity.”

On Sunday evening, stores in the Palestinian towns of the Galilee and elsewhere remained shuttered, with the strike set to continue into Monday and some areas bracing themselves for the prospect of further protest. Both locals and representatives of Palestinian communities expressed anger and frustration with police.

“The very severe attacks are happening every day. Police are attacking people when they are going to al-Aqsa mosque, but when they are in different places too,” said Salah Mohsin, spokesperson for the Adalah Arab rights NGO in Israel. “Unfortunately we have a very bad experience with the unit that investigates the police inside the Ministry of Justice, too. They usually close the file without any indictment.”

According to a recent request filed by Adalah, 93 percent of almost 11,300 complaints of police violence against Israeli citizens were closed or not investigated between 2011 and 2013, a figure Mohsin expects to be higher when Palestinian citizens of Israel are involved.

Matters are being further aggregated by the Israeli authorities advocation for the use of lethal force against Palestinians that are deemed to pose a threat. Israel's internal Security Minister Yitzhak Aharonovich responded to an attack in Jerusalem earlier this week by stating that “any terror attack should end in the elimination of the terrorist at the site”. Human rights group Yesh Din has slammed this course of action as “absolutely illegal”, with Mohsin linking directly to Hamdan’s shooting.

“The statement of Aharonovich meant that every event of Arabs attacking somebody, should end with the killing of the person,” he said.

“And we see what happened is a direct implementation of the statement of the police minister. These policemen heard their boss and implemented directly what they said. Although there was a possibility to deal with the situation by causing less harm and damage, they chose to just kill the guy.”

During Sunday’s protests, the sense that Palestinian citizens were racially targeted was voiced by many. Demonstrators held signs reading “you are an Arab? You are a suspect!” and “Accusation: Arab; punishment: death.” In Kfar Kanna, where most of today's clashes occurred, local people were reluctant to speak with press for fear of harsh repercussions from the Israeli authorities.

Despite the unease and frustration among Palestinian citizens of Israel, however, Mohsin believes that younger protesters are taking to the streets in defiance of the threat of arrest.

“Youth movements are calling their demos a day of rage. They are expressing more anger and rage than fear,” he said. “We witnessed that all over the past period during the war in Gaza. We see that the younger generation are willing to face the police forces. The new generation want to change the situation, not just protect themselves.”