Israel elections: As Netanyahu hits a wall with voters, this one is about the best of the rest

For the first time, a right-wing prime minister could emerge from Likud's rivals – a scenario that promises neither stability nor progress 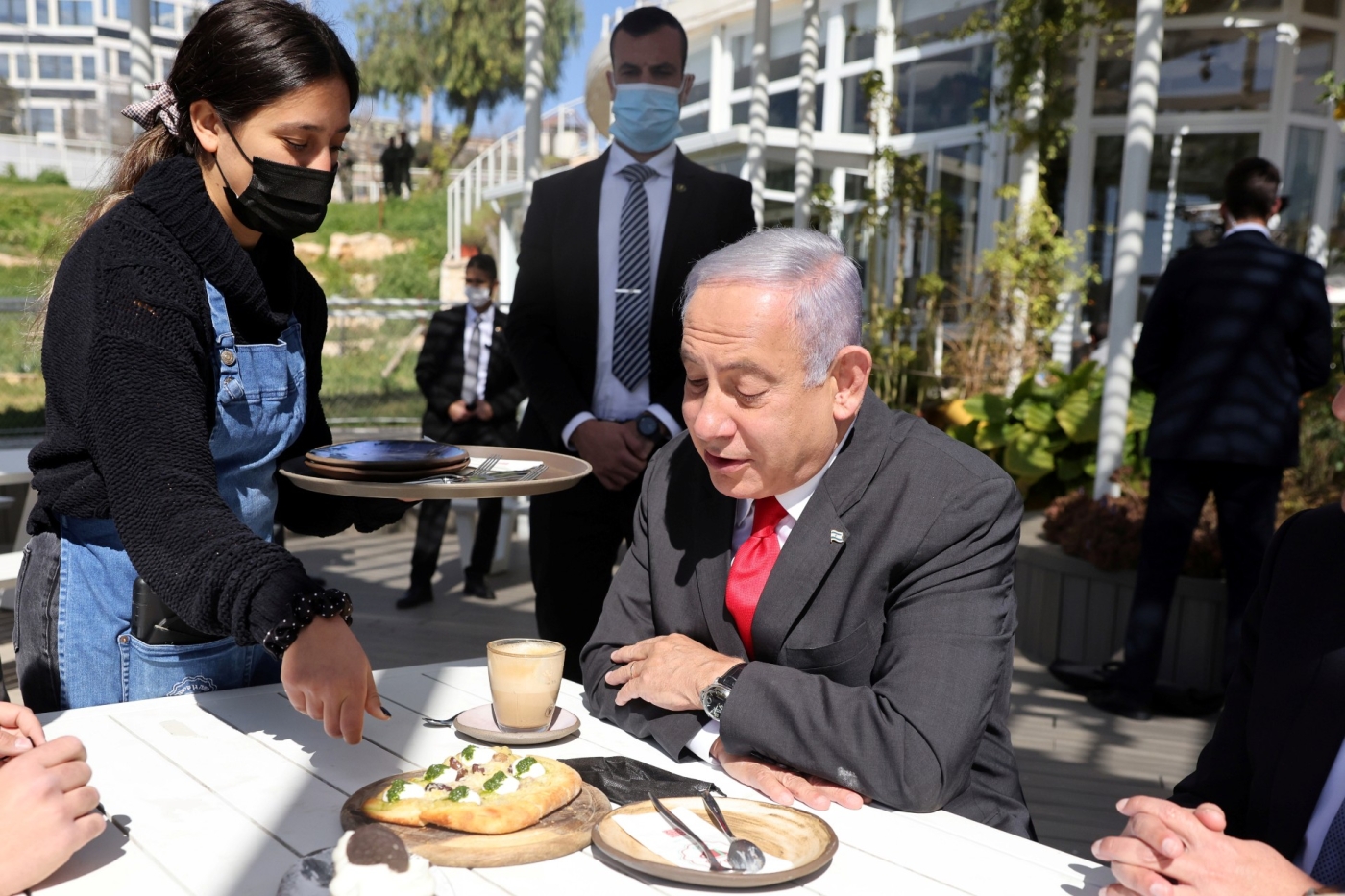 What seems at first to be a weary fourth round in a two-year-long election cycle could instead turn out to be one of the biggest dramas in Israel’s political history.

After polling day on 23 March, Israel’s prime minister will once again be a right-winger. But it might not be Benjamin Netanyahu, or in fact anyone from his ruling Likud party.

Such a scenario has never happened before. Over almost 45 years, right-wing prime ministers and whoever led Likud were synonymous; over the past 12 years, the name Benjamin Netanyahu has been part of that equation.

That axiomatic concept might unravel. Be it Gideon Saar (once of Likud, now head of the New Hope party), or Yamina chief Naftali Bennett, two of Netanyahu’s rivals to the right might make history by luring voters who shun the left but are fed up with the prime minister.

One of them will need to take about 150,000 voters from Likud, which translates to three to four seats in parliament, to be able to form a viable government.

A lot has to happen for this scenario to materialise, but its very possibility is a first.

Just a year ago, Bennett, then defence minister, said Israel is “embarking on a real and immediate battle for the future” of Area C, the part of the occupied West Bank under total Israeli control.

“We will apply sovereignty to all of Area C, not just the settlements, not just this bloc or another,” he added, making his position on annexation as clear as day.

Saar’s New Hope, meanwhile, rejects Palestinian statehood. He supports annexation, but has said he’s willing to suspend its implementation in order to respect the terms of Israel’s normalisation deal with the UAE.

If your aim in this election is to oust Netanyahu, there is a slight chance it can be achieved. If you aim at changing policy, ending occupation and taming the capitalist economy, no conceivable outcome will take you there.

The focus on who will become the two runners-up is crucial, despite the fact that the third contender, Yair Lapid, head of the centrist Yesh Atid party, has a solid lead over the other contenders for the title of “best of the rest”. Lapid is winning in 20 seats, compared with the 12-14 Saar and Bennett are projected to gain between them in the most recent polls.

The assumption is that the head of a right-wing party stands a much better chance of forming a coalition government with other right or far-right parties. The real behind-the-scenes battle is over who becomes leader of the nationalist right-wing camp after the Netanyahu age. All aim at the premiership.

What is Israel building at its Dimona nuclear site?
Richard Silverstein
Read More »

“They all add up to a substitute that might become a critical mass with no Netanyahu in there - certainly a dramatic event.”

Until recently, Klughaft worked as Netanyahu’s strategic adviser. He gave the prime minister his enduring slogan of “many politicians, one leader”, and departed over financial disagreements.

One possible and chaotic scenario he raises is a tripartite rotation government with Lapid, Saar and Bennett. Since the trio (so far) have vowed not to sit with, or under, each other, even this nightmarish option is mere wishful thinking compared with another alternative: a fifth round of elections.

Netanyahu is fighting for his political life and, on trial for corruption, his personal freedom too. No act is too low, no word too mean, to secure this. So far, his tactics have had limited success. His ceiling in the polls appears to be 29 seats, and if that happens, the prime minister might easily drag Israel to another round of voting.

“Verified miracle” is a prerequisite for sainthood in the Catholic Church. Judging by this criterion, Netanyahu might qualify for the title.

It cannot be a coincidence that all of Israel opens abruptly, after covid restrictions, to near normality just two weeks prior to election day.

A month ago, in a cabinet meeting on 7 February, Netanyahu yelled at his rival-turned-defence minister Benny Gantz, saying the “blood of many Israelis" will be on Gantz's hands if he brings about even partial opening prematurely. Two weeks ago, he scolded Gantz again, this time for opposing more severe restrictions. And then the miracle happened.

Netanyahu needs his voters happy, proud of the saviour who keeps reminding them by the hour that he brought them the vaccines

Despite the spread of new coronavirus variants, Netanyahu announced on Fox News: “Israel is the first country in the world to emerge from corona... it’s behind us.” Nothing short of a miracle.

He only forgot to tell it to perplexed Israelis and bewildered health authorities, struggling now with the need to tell the public the pandemic is far from over without saying the prime minister is lying. Some even insinuate there might be a need for another lockdown, a far cry from Netanyahu’s political timetable. He needs his voters happy, proud of the saviour who keeps reminding them by the hour that he brought them the vaccines.

Netanyahu’s motif of “only I could have done it” has been exhausted. He’s now pushing another – “The future is bright and I will bring you nine million vaccines. Only I can do it” – and it sounds a lot better, as malls are packed, schools reopen for the first time in nearly a year, and Israelis stranded across the globe are finally allowed home.

In the complete absence of any coherent policy, more new variants might enter the country. If they do, the effect will be delayed until after votes are cast. In an online Kan News survey, the vast majority of respondents attributed the title “cunning” to Netanyahu.

The Israeli left is almost absent from the scene of these elections – too small and too divided to play a crucial role. This round, sadly, is nicknamed by many the “election in the presence of one party”, as one side of the political divide has essentially not turned up.

The “anti-Bibi” camp, meanwhile, makes an odd couple, twinning left and right, ranging from the Joint List and Meretz to New Hope and Yamina. This oddity creates an unprecedented political phenomenon: voters who traditionally vote for leftist parties switching to those on the right, who, they believe, stand a better chance of ousting Netanyahu.

That is what happens when voting is devoid of all ideology and boils down to “Bibi or not Bibi”. And this so-called “strategic voting” is potentially dangerous. It may leave out left-wing party Meretz, now below electoral threshold, while opening the doors of parliament to racist Rabbi Meir Kahane’s disciple Itamar Ben-Gvir, now on the surging Religious Zionism list. Yet these almost invisibly small left-oriented parties play a crucial role in these elections. In fact, their weakness might decide the future. If all of them insist on staying in the game regardless of the polls, as they do now, the votes lost by those who do not reach the electoral threshold might secure the survival of Netanyahu’s coalition.

If so, they will do to the left-wing what Abbas Mansour did to the Joint List, when he decided to run on his own. By abandoning the Joint List, the Ra'am party leader encouraged Netanyahu to go after the Arab vote. The prime minister spends days in Palestinian villages, and prides himself on being called “Abu Yair”.

This painfully cynical conduct only partially pays off. Druze voters, offended by the Jewish Nation-State law, are now more reluctant to vote for him. In return, he now courts the Bedouin vote. But that initially triumphant campaign came to an abrupt halt, when the mayor of Rahat, a Bedouin city in the south of Israel, refused to welcome Netanyahu this week. “Let him come after the election,” he said.

No politician and no political commentator dares to prophesy what will happen on 24 March – there are too many “ifs”. One scenario posits a government of three rotating prime ministers: Lapid, Saar and Bennett. Another sees Bennett joining Netanyahu to get him over the line of 61 seats he needs to build a government.

In return, Bennett would likely demand to merge with Likud, thus paving the way to his future leadership of the right-wing camp and premiership the day after Netanyahu departs. Others believe he will choose the anti-Bibi camp if offered the chance to serve as prime minister first in the bizarre tripartite rotation.

In all scenarios, Bennett is a key player. All scenarios are unsavoury, but none of them scares Israelis as much as a fifth round of elections.