Officials from Hamas and Israel have confirmed the truce, which came into effect at 2am, local time People wave the Palestinian flag as they celebrate in the street following a ceasefire brokered by Egypt between Israel and the two main Palestinian armed groups in Gaza on 21 May, 2021 (AFP)
By
MEE staff

A ceasefire between Israel and Hamas aimed at ending eleven days of intense bombing on the besieged Gaza Strip appeared to be holding early on Friday, despite cross-border attacks in the hours leading up to the truce.

Israeli Prime Minister Benjamin Netanyahu's office said in a statement on Thursday that it had accepted Egypt's proposal for a "mutual" ceasefire in the Gaza Strip, after several days of mounting international pressure.

The ceasefire, if it holds, would end the heaviest Israeli bombardment of the Gaza Strip since its 2014 offensive.

Over the last 11 days, Israeli air strikes killed at least 232 Palestinians in the Gaza Strip. Of those killed, 65 were children, 39 were women and 17 were elderly men. In Israel, 12 people were killed.

Palestinians in Gaza and the occupied territories took to the streets to celebrate at 2 am local time, (23:00 GMT Thursday), when the ceasefire came into effect.

Celebratory gunfire and fireworks could be heard while mosques used their loudspeakers to broadcast celebratory chants as the war-torn enclave hailed the apparent end to some of the worst violence in a decade.

The ceasefire comes amid heightened pressure from the US and the European Union.

In remarks delivered on Thursday evening, US President Joe Biden Biden commended both Egyptian President Abdel Fattah el-Sisi and Netanyahu for the truce, while reiterating that the US "fully supports Israel's right to defend itself against indiscriminate rocket attacks from Hamas and other Gaza based terrorist groups".

"These hostilities have resulted in the tragic deaths of so many civilians, including children, and I send my sincere condolences to all the families, Israeli and Palestinian, who have lost loved ones," Biden said.

Biden added that the US was committed to providing humanitarian assistance and support for reconstruction efforts in Gaza, but would only work with the Palestinian Authority, not Hamas.

Despite efforts to broker a ceasefire, both parties continued exchanging blows late on Thursday - with Israeli strikes causing significant damage in the besieged Gaza Strip.

More than two million Palestinians are packed into Gaza, an area the size of the US city of Detroit. Under blockade by Israel since 2006, the area has been described as "the world's largest open-air prison".

Earlier, the White House said that it believed Israel would agree to a ceasefire because it had "achieved significant military objectives that they laid out to achieve, in relation to protecting their people and to responding to the thousands of rocket attacks from Hamas".

"So that's why in part that we feel they're in a position to start winding their operation down," said White House press secretary Jen Psaki during a regular briefing earlier in the day.

Hamas began shooting rockets at Israel on the night between 9 and 10 May. The initial attacks, which caused no deaths or damage, were in response to Israel's invasion of the al-Aqsa Mosque and its attempts to forcibly evict Palestinian families in East Jerusalem's Sheikh Jarrah neighbourhood.

Tensions were already high as Israel had put severe limitations on Palestinians' right to enter and pray at al-Aqsa Mosque during the holy month of Ramadan. Around the same time, Israel's Supreme Court had ordered 40 Palestinians in Sheikh Jarrah, including 10 children, out of their homes, which were set to be taken over by Israeli settlers.

Protests erupted in Sheikh Jarrah over the decision, and within days, solidarity demonstrations spread across the rest of occupied East Jerusalem and the West Bank, as well as Gaza.

Israeli forces attacked a large solidarity protest at al-Aqsa Mosque that had followed a massive day of prayers, shooting tear gas and rubber-coated metal bullets into and around the mosque, which is considered the third holiest site in Islam.

Outrage quickly spread across Palestinian communities, and the Hamas movement gave Israel an ultimatum, demanding it withdraw its forces from al-Aqsa Mosque and halt its plans to force Palestinian families out of Sheikh Jarrah.

When Israel did not respond, Hamas shot its first missile. The next day, Israel responded with sophisticated air strikes and began taking out high rise buildings. Throughout its bombing campaign, a high level of civilian casualties, particularly children, have been documented.

While there were reports that the ceasefire had been conditional on Israel meeting Hamas' original demands, Israeli journalist Barak Ravid has reported that no such conditions were agreed upon.

BREAKING: Senior Israeli official pushed back on Hamas claims: “The agreement is unconditional. There are no understandings or commitments regarding the al-Aqsa mosque or Sheikh Jarrah as part of the agreement. Those claims are totally false”

"The agreement is unconditional. There are no understandings or commitments regarding the al-Aqsa mosque or Sheikh Jarrah as part of the agreement. Those claims are totally false," a senior Israeli official told Ravid.

According to the Israeli military, some 4,000 rockets had been fired into Israel from Gaza since last Monday.

Despite the ceasefire announcement, Palestinians in the occupied territories said they remained sceptical that tensions would ease in Jerusalem, particularly with residents of Sheikh Jarrah still at risk of imminent eviction.

Hamza Qattina, a lawyer from Jerusalem, said the ceasefire brought about a "disguised and temporary calm" in the disputed city.

"This mask will disappear shortly after the end of the war and the occupation will return to its violations," he told Middle East Eye.

He added that Israeli courts had not annulled the decision to evict Palestinian residents from their homes.

"Instead, occupation forces have set up barricades around Sheikh Jarrah and besieged its people even more. They are trying to expel the families making the least noise possible," he added.

Qattina said that he expected Israel to de-escalate tensions in Jerusalem for a few weeks, "so that everyone thinks they are not the ones causing tensions."

Hatem Abdel-Qader, a member of the Fatah Revolutionary Council and Council of Islamic Endowments, said that recent developments in Gaza created a new awareness regarding the Palestinian struggle and the dire situation Jerusalem.

"Jerusalem will remain the compass and heart of events regardless of whether the aggression on the Gaza Strip ends or continues," he told MEE.

"The battle in Jerusalem is still ongoing and will continue until Israel ends the occupation. For Israel, Jerusalem is at the forefront of its attack on Palestinian national aspiration and it’s undergoing a fierce open war against all components of the city," he told MEE.

"Therefore, the noble Aqsa Mosque will remain the hottest flashpoints and the other point will be Sheikh Jarrah. These won't calm down as long as Israeli measures continue.

"I believe Jerusalem before the 28th of Ramadan is different from Jerusalem after this date," Abdel-Qader said.

"There is a new awakening and a new equation established by the people of Jerusalem which is based on meeting Israeli oppression and aggression with steadfastness and resistance."

This new equation, according to Abdel-Qader, is what compelled Israel to postpone, even if temporarily, the eviction notice for the residents of Sheikh Jarrah. He pointed out that Israel has realised the expulsions would constitute a “red line” for the residents of Jerusalem.

"Jerusalem will not calm down as long as Sheikh Jarrah is being targeted and there are attempts to evict Palestinians."

Meanwhile, researcher and political analyst Khalil Shaheen believes that the current moment across occupied Palestinian territories will strengthen the longstanding tradition of resistance in the Palestinian struggle against Israel.

Speaking to MEE, Shaheen said the struggle against the occupation has been taking a new turn since 2014, after the Israeli aggression on the Gaza Strip and the popular uprising that coincided with it in the West Bank. Then there was the Jerusalem popular uprising in 2017 against the installation of electronic gates by Israeli authorities on gates of al-Aqsa Mosque. 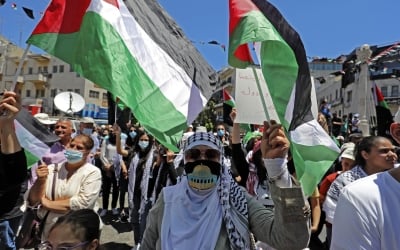 On the current wave of demonstrations, Shaheen said the West Bank is witnessing a new phase. The researcher said the wave has mostly been dominated by youth and popular initiatives that appear to be largely unorganised but are still able to accumulate efforts and make an impact.

Despite Shaheen's optimism that the popular sentiment of resistance in the West Bank will continue, he fears the Palestinian Authority’s repressive policies will likely lead to more oppression and persecution.

Shaheen said Palestinian President Mahmoud Abbas is eager for the fighting in Gaza to end so that he can focus efforts on going back to negotiations with Israel and reviving the peace process.

"There is a gap between the PA on one hand, which wants to recreate the same old policies, and a Palestinian youth on the other hand who want to forge a new path for themselves,” Shaheen said.

"The PA is showing support to the current popular uprising, but in reality, it doesn’t want any change to the status quo. Therefore, in the coming stage, we will witness a heavier crackdown from the PA, which fears the explosion of Palestinian society." 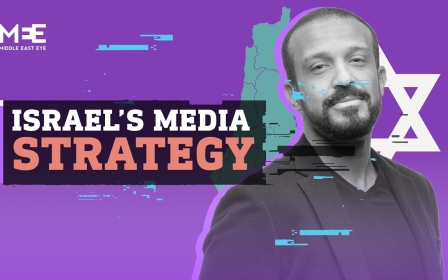