Aboard a boat off the Gaza City shore - A vessel carrying 17 student activists and Palestinians injured during the recent Great March of Return protests attempted to break Israel's siege on the Gaza Strip on Tuesday, before the Israeli military intervened.

Israeli security forces arrested the passengers from the boat running the blockade and escorted the vessel 12 miles away from the Gaza coast to the Israeli side. Israel said it took the 17 Palestinians to the Israeli port city of Ashdod, later returning them to Gaza.

The attempt to break the siege comes as tensions run especially high in the Gaza Strip, with Israeli warplanes pounding targets in the Hamas-run Palestinian territory in response to mortar fire.

Rockets have also been fired from the strip towards Israel, in the most intense exchange of fire since the 2014 Gaza war.

The vessel set off from Gaza on Tuesday morning accompanied by dozens of smaller boats which came out in a show of support.

The smaller boats peeled off gradually as the leading boat attempted to reach the six-mile fishing limit imposed by the Israeli authorities on Gaza.

But Israeli warships began to intercept the boat as it approached the de facto maritime border.

'We hold a message of freedom and peace'

A'laa el Batta, who heads the International Committee to Break the Siege on Gaza, told Middle East Eye that three Israeli ships had surrounded the boats attempting to leave Gaza.

The captain onboard one of the Palestinian boats told Batta that the flotilla was six to seven miles off the coast of Gaza. "The people on the boat are in high spirits and insist on continuing to break the siege. The majority of the people on the boat are sick and injured," Batta told MEE from his base of operations in Gaza City, where he is tracking the flotilla's progress.

"We hold a message of freedom and peace, and this is our call to the world to hear our voice, that we cannot any more accept this siege. We hope to achieve the goal of breaking the siege and freeing our people, ourselves, from this inhuman siege," he added.

"And we ask the world to give us safe passage through their ports."

Activists say the blockade-breaking boats are part of the ongoing Great March of Return protest campaign that began at the end of March.

"Al-Hurriyeh is part of the events of the Great March of Return," Adham Abu Selmeyeh, a spokesman for the committee for breaking the siege, told Middle East Eye.

"The boats will carry a group of patients, people with injuries, and others with humanitarian cases who need to leave Gaza as soon as possible."

In a statement, the Israeli military said it believed Hamas was behind the initiative.

This latest act of protest, dubbed al-Hurriyeh (Liberty), comes as Israel plans to build a physical maritime border with Gaza.

It also coincides with the eighth anniversary of a deadly Israeli raid on a flotilla that attempted to bring supplies into Palestinian territory in 2010.

Nine Turkish citizens were killed by Israeli soldiers who commandeered the boat. Israel apologised to Turkey in 2013.

The al-Hurriyeh boats departed the Gaza shore as a flotilla from Denmark makes its way towards the strip in another attempt to break the Israeli blockade.

"The naval blockade is a necessary and legal security blockade that has been repeatedly recognised by the world," the Israeli military said in a statement.

Israel has been repeatedly criticised by governments and rights groups for its strict blockade on Gaza, including its maritime restrictions.

In other developments, the Israeli military and Palestinian fighters exchanged fire on Tuesday in a significant flare-up.

Israeli jets pounded central Gaza in response to mortar bombing from the strip on Tuesday morning and said it targeted 30 Gaza 'military targets'.

One mortar bomb exploded near a kindergarten building, an Israeli military spokesman said, causing damage to the structure.

Following the Israeli air strikes, rockets were fired into Israel.

The mortar attack was the largest projectile barrage from Gaza targeting Israel since the 2014 war, according to Israel's Shin Bet internal security service.

There was no immediate claim of responsibility for the mortar bombing, which Israeli media claimed was fired by militant group Islamic Jihad.

For the past 11 years, Israel has imposed a siege on Gaza, severely restricting the flow of goods into the enclave, including food and medical supplies.

Boats in Gaza are limited to six nautical miles offshore; the Israeli naval forces regularly fire at Palestinian fishermen who sail within the permitted area.

Additional reporting by AFP and Reuters. 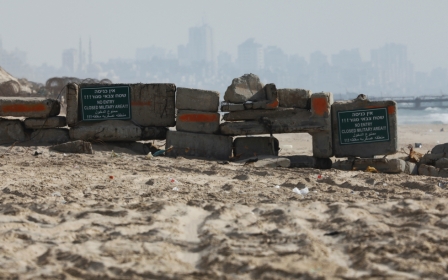