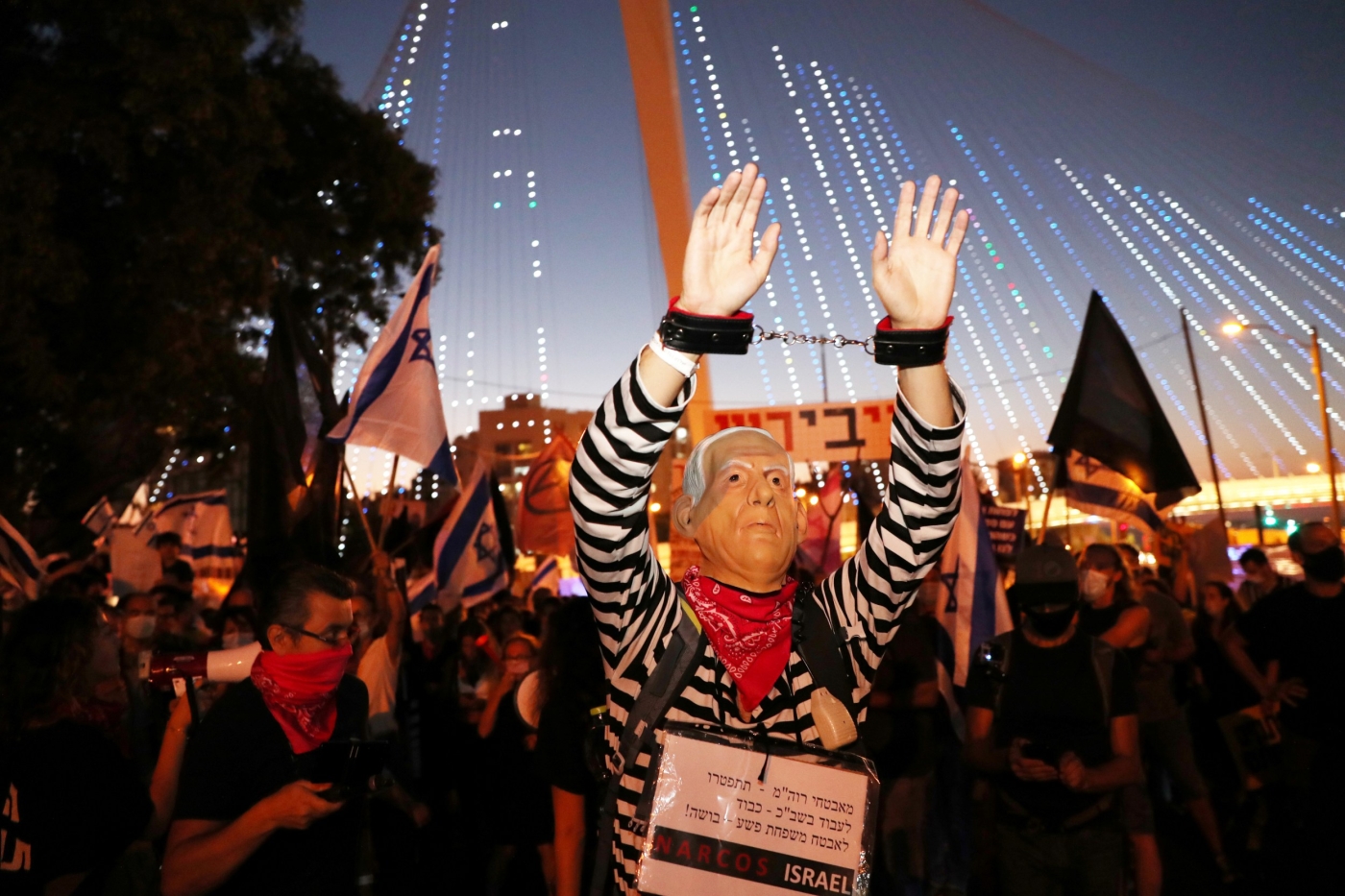 A protester wearing a rubber mask of Israeli Prime Minister Benjamin Netanyahu and a jail suit during a demonstration against the premier in Jerusalem on 22 August 2020 (Reuters)
By
Lily Galili
in
Tel Aviv, Israel

All happy segments of Israeli society are alike; each unhappy segment of society is unhappy in its own way.

The first part of this paraphrase of the iconic quote by Russian author Leo Tolstoy is rare to come by. Few people can be defined as “happy” today in Israel - with the country coronavirus-stricken, in the midst of an unprecedented economic crisis and with a political system running the range from corrupt to incompetent to plain inefficient and cruel.

The second half of the quote better reflects the state of the nation. Every unhappy sector of society has different needs and carries a different burden. In a deeply divided society, they even compete with one another over establishment handouts.

Over the last few weeks, anger and frustration has brought Israelis together out on the streets in mass demonstrations demanding the resignation of Prime Minister Benjamin Netanyahu over his ongoing corruption probes and his government's handling of the coronavirus pandemic.

One major sign that the current popular discontent is unlike anything else Israel has ever experienced is the participation of Russian-speaking Israelis.

The Russians are coming - not in the comic sense of the Cold War-era movie, but rather as Israelis fighting over the future of their society and the very nature of their country.

Over the last two decades, in all political or social protests one question came back over and over: where are the Russians? The answer was rather complex: then newcomers, they were still preoccupied with the very basic concerns of assimilation in the country. Some were still traumatised by the vindictive character of the regime in their countries of origin; others simply doubted the validity of protests or the very cause of demonstrations.

But 2020 brought the change. For the first time in the history of  immigration from the former Soviet Union, Russian-speaking citizens joined the mass protest.

“I’m going to the demonstration in front of the PM's residence,” Katya K. wrote on Facebook. “I’m afraid”.

“Katya is a hero,” some of her friends wrote back in Russian. One Lev K. wrote in reply: “My thinking exactly. Is this the Zionist vision? This is what we came to Israel for?”

This exchange is particularly noteworthy coming from the “1.5 generation”, referring to those who arrived in Israel as children during a large wave of immigration from the former Soviet Union in the 1990s. Now between 30 and 45 years old, this generation is now believed to have a big impact on Israeli politics and society.

A week ago, still hesitant, they organised their own all-Russian demonstration. Hundreds came from all over the country. On Saturday, they will join the weekly mass demonstration in front of Netanyahu’s residence in Jerusalem.

“I was 10 years old when I came to Israel and made it my home,” Pavel Kagan tells Middle East Eye. Now a 40-year-old software engineer, Kagan is a leading figure in the Russian speakers’ protest.

“This home is now simply crumbling. My parents came here for me, it is now my turn to make sure this is not the kind of homeland I leave to my children,” he adds. “This is our mission as Russian speakers to warn our community against the dangers of loss of democracy.”

Netanyahu loves to refer to protesters as “just one fourth of a seat in the Knesset” - an allusion to the 40,000 votes needed to obtain a seat in Israel’s parliament, insinuating, only 10,000 people are behind the demonstrations.

For the premier, demonstrators are not citizens in pain, but rather an insignificant number of anarchists who urinate in front of his house. His wife, Sara Netanyahu, has also referred to protesters as junkies in a rare TV appearance.

But Netanyahu should be - and probably is - worried about the unexpected organised participation of Russian speakers in the protest movement.

He has long taken for granted this segment of society as avid supporters of his Likud party, or at least of his right- wing coalition. But the people who have only just joined the protest actively express sentiments on social media questioning their very decision to come to Israel, expressing disappointment with their new homeland and making uncomplimentary comparisons between their countries of origin and the Promised Land that does not keep its promises.

This major change on the Israeli social and political scene is accompanied by tectonic changes in political coalitions and opposition structures.

MP Avigdor Lieberman, an on-again, off-again ally of the premier, is now vocally opposed to Netanyahu. Lieberman’s own right-wing party, Yisrael Beiteinu, perceived as the “Russian party”, has seen its MPs openly encourage participation in demonstrations and warn against erosion in democracy and Netanyahu’s overt attempts to suppress protests. Quite a twist in the story.

While Lieberman’s new stance has had some impact on the community, it is certainly not the reason for the profound change on the “Russian street”.

The real reason is relatively simple: Israel has become too similar to Russia: the sense of fear, the police brutality encouraged by Netanyahu’s entourage, the active intimidation of journalists, the attempts to silence opposition, the persecution by all branches of law enforcement, the total disregard for the democratic system manifested by the government, the bag of tricks Netanyahu carries to stay in office at all cost.

Israel is not Russia, far from it, but for its Russian-speaking population it feels more and more like it. “Bibism” is not “Putinism” - but support for Netanyahu is not just loyalty to a party or ideology; it is a sect close to a personality cult, one these immigrants know too well from personal history. “People are terrified by the new bills approved under the coronavirus smokescreen,” political strategist David Aidelman tells MEE. “They are particularly troubled by the one allowing the summoning of workers to all jobs defined as urgent; it reminds the Russians of lagerei - forced labour camps in Soviet Russia.”

For Alla Shainskaya, the head of liberal Russian-speaking NGO Charter for Democracy and a researcher on the mass immigration to Israel in the 1990s, “we are not there yet, but people are drawing more and more analogies”.

Talking to MEE, Shainskaya refers to the atmosphere of fear and its unique impact on those who came from the former Soviet Union.

“We know too well the theme ‘the enemy is the one who thinks differently’,” she says. “We just did not expect to encounter it in Israel. People are afraid to speak up.

“In Russia, we used to hold critical discussions in what we called ‘the Moscow Kitchens’; here, there are ongoing discussions in closed groups on Facebook. People share disappointments with Israel, sometimes openly express a desire to leave,” she adds. “Once, there was a lot of talk about war and unstable security. Now, people talk about shaky democracy and the fear of losing it again."

Then there is the real, physical fear. Fear of violence by the far-right allowed to run loose in the name of Netanyahu.

On 29 July, 27-year-old Shai Sekler, a demonstrator of Russian origin, was viciously beaten by far-right supporters towards the end of a demonstration in Tel Aviv.

Translation: Protesters were attacked here. Shai was attacked by La Familia members, who sprayed pepper spray at him and broke a glass bottle on his head. There are a few more wounded here.

A photograph of him completely covered in blood was meticulously analysed by Likud-affiliated, Russian-speaking peers, who claimed it was a fake. But Sekler’s mother wrote back in Russian: “This is my son. His wounds are real.”

Alexander Osovcov, 64, was a life-long, anti-Putin activist in Moscow. Unfortunately, he was never properly able to attend demonstrations in Russia, as he was usually detained on the way to the protests and denied access to his much-needed insulin injections.

He left Russia after being secretly informed that it was too risky for him to stay. “Some of the analogies people draw are totally wrong,” he tells MEE. “Our experience in the former Soviet Union and then in Russia was of a government constantly lying to the people.

“Many of us believed that would be different in Israel,” he adds. “It is disappointing to realise - again - that the prime minister and the whole government are lying to us.”

One theme keeps recurring in conversations with immigrants from the former Soviet Union: that of a people traumatised by the collapse of what seemed to be a powerful empire, and feeling dread at the thought that their new homeland is so different from what they expected it to be.

They do not refer to conflict or occupation, but instead point to the weakness of the health, education, welfare and democratic systems. This is why they take out to the streets.

The slogan for the Russian-led protest says, in Russian: “Time for changes - come and join us.”After decades of keeping their heads down, Israel’s Russian community wants its own, unique voice to be heard in the crowd. 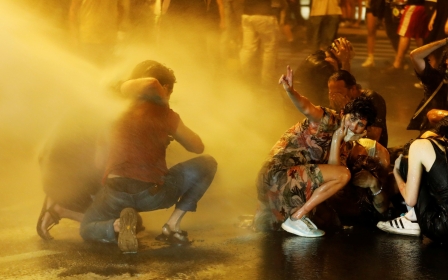 Inside Israel
'A long time coming': Anti-Netanyahu protests in Jerusalem met with violence