Meanwhile, Israeli forces stormed the house of Abu Shukhaidem, who shot and killed an Israeli and injured four others in the Old City on Sunday Israeli security forces clear the way for first responders transporting a dead body from the scene of a shooting in the Old City of Jerusalem, 21 November 2021 (AFP)
By
Mustafa Abu Sneineh

An Israeli minister on Monday called for reinstalling metal detectors at the gates of Al-Aqsa mosque in occupied East Jerusalem's Old City after a Palestinian and an Israeli from South Africa were killed in a shooting incident on Sunday.

Yoaz Hendel, the minister of communication, said that Israel "must make sure that no armed people enter Jerusalem".

"The matter of the metal detectors must be re-examined. We have given up on this in the past and it is impossible to give it up in the future," he said on Sunday.

Israel installed metal detectors in the summer of 2017 at the gates of Haram al-Sharif's esplanade, known to Jews as the Temple Mount. The step was denounced by the Palestinians, who at the time refused to enter the compound through the Israeli barriers in protest.

Israel had to remove the metal detectors amid increased protests in Jerusalem and warnings from Israeli intelligence of an escalation in the occupied West Bank.

On Sunday, Fadi Abu Shukhaidem, a teacher aged 42, shot dead Eliyahu David Kay, who recently moved to Israel and completed his military service, according to the Times of Israel.

Abu Shukhaidem, who dressed in ultra-orthodox attire during the shooting, injured four others in the Old City's Chain Gate area before being shot and killed.

He was hailed by the Hamas movement which governs the Gaza Strip as one of its "leaders" in Jerusalem.

It said in a statement that the shooting was "a message" and "a warning to the criminal enemy," referring to Israel, "to stop the attacks on our land and our holy sites," adding that Israel "will pay the price" for incursions on Al-Aqsa mosque, Silwan and Sheikh Jarrah neighbourhoods, the Gaza-based al-Watan Voice news reported.

Israeli authorities have launched a crackdown on the family of Abu Shukhaidem since the incident. They stormed his house in Shufaat refugee camp, as well as Rashidiya, a school opposite the ancient walls of Jerusalem where he taught.

According to Wafa news agency, the Israeli army fired a stun grenade into the mayor's home in Silwan neighbourhood, beat him and his family members, causing injuries, and arrested three of them.

Gheith, who lives in East Jerusalem, has been in and out of Israeli detention 28 times since 2018. He has since been barred by Israeli authorities from entering the Old City and towns in the West Bank or communicating with 51 Palestinian national figures.

In a separate incident on Sunday, an 18-year-old Palestinian from Jenin in the West Bank stabbed and wounded an Israeli man in Jaffa near the coastal city of Tel Aviv, before his arrest. 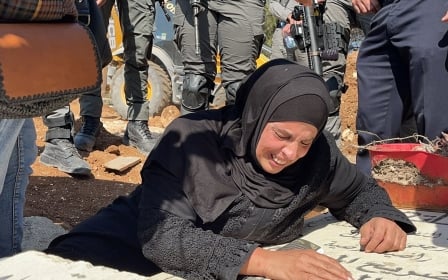