Israel-Palestine: Defiance and despair among Palestinian refugees in Jordan, Lebanon and Syria 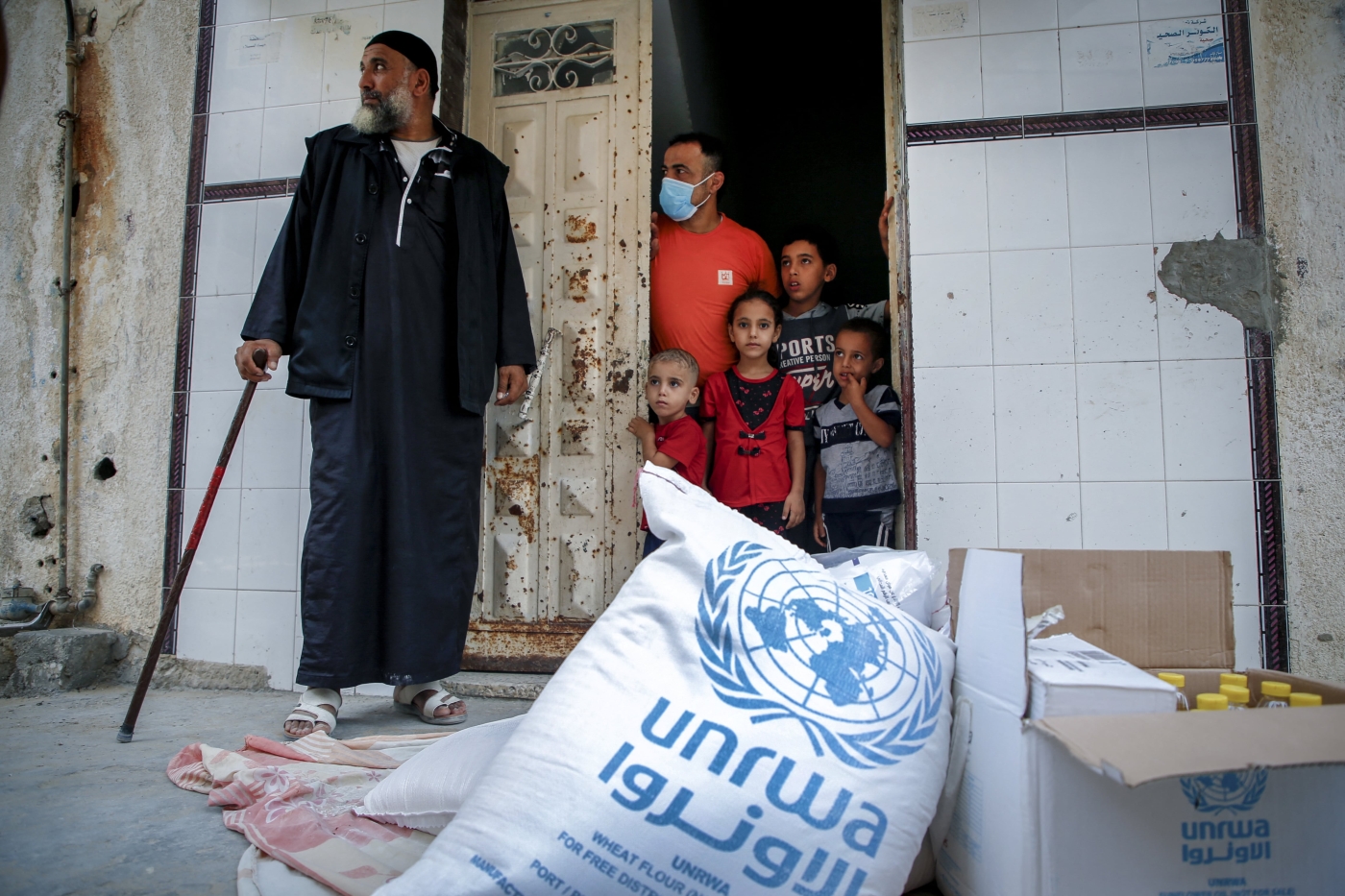 A week into the violence across Israel-Palestine in May, which began with protests against forced displacement of Palestinians in Jerusalem's Sheikh Jarrah district and culminated in a bombing campaign on Gaza that killed hundreds of people, mostly Palestinians, groups of pro-Palestine demonstrators gathered at the Lebanese border to the north and the Jordanian border to the east.

"The border must be opened so that we can defend al-Aqsa and Jerusalem to the death," 23-year-old Mohammed Khalil, a protester in Amman, told AFP, referring to al-Aqsa Mosque compound, one of Islam's holiest sites, in East Jerusalem.

Many of the more than five million Palestinian refugees living in diaspora communities after they - or their ancestors - were forced out of their homes feel an umbilical connection with events in Palestine, born out of a determination to return and redress a sense of deep historical injustice.

In 1947-48, during what was known as the Nakba, or Catastrophe, roughly 800,000 Palestinians were forcibly displaced when the United Nations partitioned Mandatory Palestine and Jewish paramilitary groups - some of whose members would go on to become key Israeli leaders, including Yitzhak Rabin, Ariel Sharon and Moshe Dayan - destroyed and depopulated Palestinian areas. 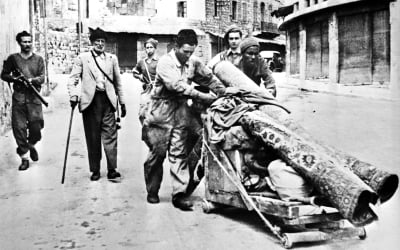 From Balfour to the Nakba: The settler-colonial experience of Palestine
Read More »

An estimated 15,000 Palestinians were killed, and 418 towns and villages were ethnically cleansed and eradicated.

Then, after the 1967 Six Day War, known by Palestinians as the Naksa, at least 300,000 more people (including some Syrians) were kicked out of their homes or fled when Israel seized and occupied territories including the Golan Heights, the West Bank, with it East Jerusalem, and the Gaza Strip. Many of the newly displaced people had earlier been forced from their homes in 1948.

Today, 74 percent of the Palestinian population are refugees.

Many live in decades-old camps in the West Bank, the Gaza Strip, Jordan, Lebanon and Syria, some of which are administered by the United Nations Relief and Works Agency for Palestinians in the Near East (UNRWA).

Palestinian refugees often have fewer rights than locals. The longing for home back in Palestine is often aggravated by a sense that they are not welcome where they have settled.

As they have with other recent spates of violence, many Palestinians living across the border from their families' ancestral homeland closely followed, and acutely felt, the events of the past weeks.

The often-quiet Mar Elias Palestinian refugee camp, tucked away in southern Beirut, is Lebanon's smallest, at roughly 200 square meters. Its roads are so narrow that motorcycles barely squeeze through, and low-hanging cables and electric wires dangle over dilapidated buildings.

Outside the office of the popular committee of Palestinian representatives, the body that runs the camp, Ghada Othman-Daher talks to a group of boys and girls. Usually, when she isn't working in special education at the Ghassan Kanafani Cultural Foundation next door, she's busy formalising a women's committee for the camp.

But in recent weeks, Othman-Daher joined demonstrators as Mar Elias became a regular meeting point for protests against the Israeli assault on Gaza and the displacement of Palestinian families from the neighbourhood of Sheikh Jarrah in East Jerusalem. Israeli authorities' repeated storming of al-Aqsa Mosque especially disturbed her.

"Be it an assault on Gaza, or anywhere in Palestine, as refugees we have to do everything we can to support our people," she told Middle East Eye. "It might not make a difference, but it's our duty to try our best."

Solidarity protests in Beirut, noisy with clapping and chants, have often started at the entrances of Mar Elias and other camps in the Lebanese capital, like Chatila, before converging in central parts of the city. 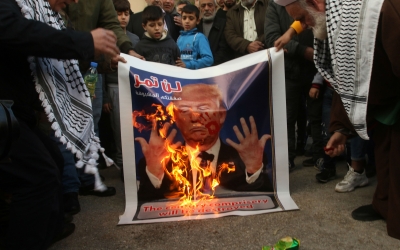 But Lebanese authorities barred most of the nearly 200,000 Palestinian refugees in the country who wanted to attend protests at the southern border. Othman-Daher was among those barred from entering the border town of Addeiseh.

"I really wish they let us through," she said. "Palestinians can't go to the border whenever they want to; they need permits and so on."

The border is roughly a two-hour drive away. It's another two hours or so to reach her father's hometown in northern Galilee.

"At the protests, we feel emotionally and psychologically closer to Palestine, but we still feel so far away," she said. "To get to Fatima's Gate [at the border], you face obstacles, and once you get there, you have a large separation wall."

With Palestinians in Lebanon barred from their most basic human and labour rights, she finds herself comforted by the urban refugee camp, which is built on "coexistence".

Established in 1952 primarily for Christian Palestinian refugees who were forcibly removed from their homes, it has slowly become more diverse, starting with Palestinian Muslims from the Tel el-Zaatar camp in 1976, besieged and destroyed by Lebanese Christian militias and the Syrian army.

"Mar Elias is special," Othman-Daher said, watching a group of young Palestinians get ready for a community service initiative. "You now have this coexistence between Palestinian Muslims and Christians, and now we live in the camp alongside Lebanese, Syrians, Egyptians, and Ethiopians."

Born to a Palestinian father and a Christian Lebanese mother, she says she has known racism all her life. "People don't get that we're refugees, and that we were forced to leave," she said. "When we're told to go back to our country, I say, 'Alright, can you please open the border for us?'"

In the meantime, she and many others continue to keep Palestine's history and cause alive among the camp's residents. Solidarity protests have helped with that too.

"We work really hard to inform the youth about Palestine's history and occupation, and why we are refugees," she said. "We can't talk about the Palestinian cause without teaching the next generation."

At the centre of al-Baqa'a refugee camp, just north of the Jordanian capital, Amman, and Jordan's biggest camp for Palestinians, stands a large statue of a key.

Many of those displaced in 1948 and 1967 brought with them, and still have, the keys to their homes back across the Jordan valley.

In al-Baqa'a, that symbol of return is a constant presence.

Abdullah al-Masri, 57, and his son Tareq, 16, sit a few metres away from the large structure in a scrap metal shop, their eyes glued to the Palestine satellite TV stations. Like everyone else in the shop, they are watching the Israeli attacks on Gaza. Abdullah is originally from Jaffa; his father left the city in 1948, and in 1967 was again made a refugee, crossing the Jordanian border and settling in al-Baqa'a.

Abdullah can't describe his anger at Israel's crimes against Gaza's people. His hand on Tareq's head, he said: "Every day when I look into the eyes of my son, I remember the people of Gaza who are suffering from Israel's killing machine. We are one people, and words can't do justice to my feelings."

"All we can do is make supplications to God for them, and our job is to keep the dream of return alive in our memory and that of our children."

Estimates vary, but roughly half of Jordan's 10 million-strong population is of Palestinian descent.

There are also more than 2.1 million Palestinian refugees registered in Jordan. Most have full citizenship rights, but the 140,000 refugees who went first to Gaza in 1948 and then to Jordan in 1967 - known as "children of Gaza" - do not have legal status. They are denied even basic services, including schooling and healthcare.

Sheikh Naim Dweedar, one of the oldest refugees in Baqa'a, always follows what is happening in Palestine. As well as reading the news, he calls his relatives in Gaza.

"There is one cause for the Palestinian people, we are one unit," he told Middle East Eye. "I am in daily contact with our people in Gaza, and they give me a true picture of the situation."

Dweedar never gives up the hope of returning home. "We are a people who believe that if we stay steadfast and refuse to give in, we will win. What is happening in historic Palestine is the best proof of the importance of sumud [steadfastness]."

In Baqa'a, street signs show the distance to Jerusalem: 100km.

Daily protests have taken place in the camp, with many calling for the Palestine border to open.

Ismael, a 20-year-old from Jaffa, said that he went to the border, but the Jordanian security forces stopped him sneaking across. Ismael insisted that people his age never stop thinking about Palestine and the right of return.

"The latest events have shown that the youth are sticking to the Palestinian cause," he told MEE.

Abdel Qader Hassona 46, the owner of a commercial shop in the camp, recently heard the news of the death of one of his relatives in Lod, a city inside Israel called Lydd by Palestians. He has been following the news on his cell phone.

"Like any other Palestinian inside [Israel-Palestine] we are affected by what is happening. We are proud of the honourable position of the resistance, and we wish we could be with them. We believe that today or tomorrow or even the last day in our lives we will return to our homeland."

"We have seen the recent events in Palestine and are very sad about what is happening there," Suzan Ahmed, a 42-year-old refugee who was born and raised in Syria's Hama, about 200km north of Damascus, told MEE. "This is our land from which we were forcibly displaced. We hope that our suffering will end here... and we will return to our country and visit al-Aqsa."

Over half-a-million Palestinian refugees lived in Syria before war erupted in the country in 2011. According to UNRWA, some 120,000 of these refugees have fled Syria since the beginning of the conflict, while 60 percent of Palestinians in Syria have been displaced at least once in the past decade. Some 1,500 Palestinian families are estimated to have fled to Idlib, a further 100km north of Hama and the last rebel-held province in the country.

“When we’re told to go back to our country, I say, ‘Alright, can you please open the border for us?’”

Populated refugee camps, most prominently Yarmouk, were brutally besieged by the forces of President Bashar al-Assad during the war, their residents reduced to eating grass and leaves to survive.

Suzan's husband, 60-year-old Mohammad Shibli, sees a parallel between the violence inflicted by Israel and the Assad government in Syria.

"My father used to talk about the Israeli bombings [during the Nakba] and what he saw in Syria, in terms of bombing and massacres," he told MEE. "Israel and the Syrian regime are competing in crimes - the Syrian regime has more hatred for Syrians, but the only difference is that Israel is an occupier that has pushed out the owners of the land, while the Syrian regime is fighting its own people, whose only demand is freedom."

Now 75 years old, Abbas Nasser was only a young child when his family fled the town of Safad, in what is now far-northern Israel, for Iraq during the Nakba. In 2003, after the fall of Saddam Hussein, he and his family moved to Damascus, only to be displaced once again during the war, this time to Kili, in Syria's northern Idlib province.

Nasser remains hopeful, however, that one day he and the millions of other Palestinian refugees will be able to return home.

"Palestine is a piece of mankind," he told MEE. "It is a gift from God." 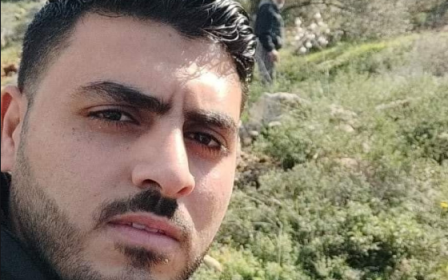 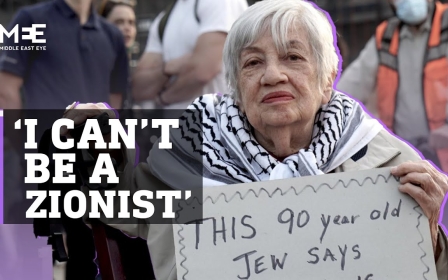 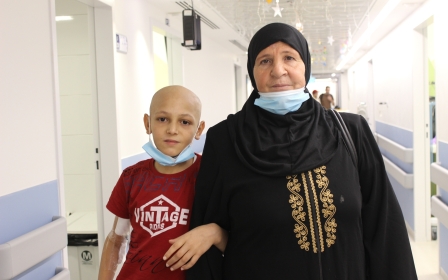