Israel-Palestine: Activists in UK shut down second Israeli arms factory in a week 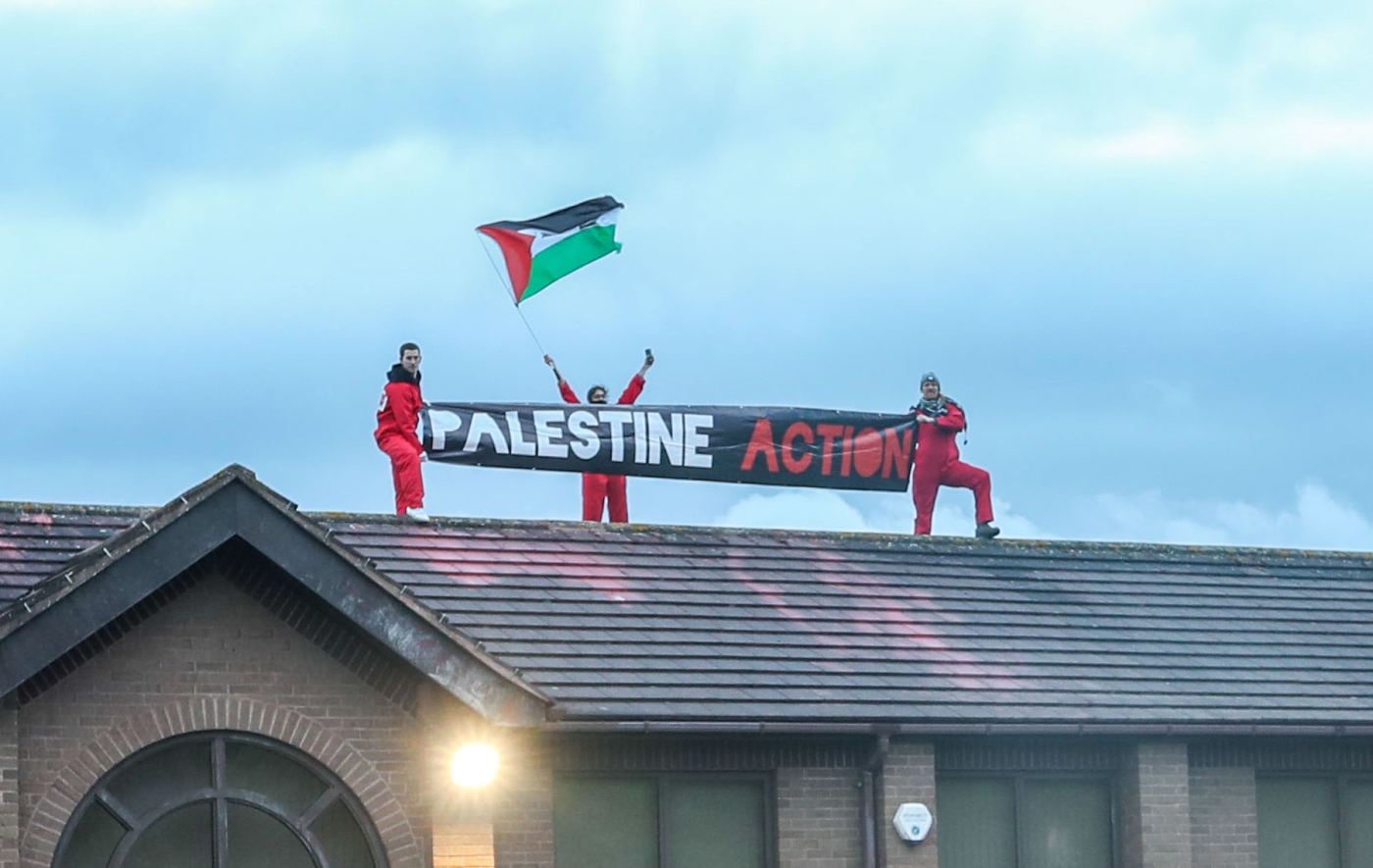 The closure of both the Leicester and Tamworth factories has led to the disruption of Israeli arms production in the UK, 25 May 2021 (Vudi Xhymshiti)
By
Nur Ayoubi

At 4.30am on Tuesday, activists from the Palestine Action group scaled and occupied the roof of a factory run by Israeli arms maker Elbit Systems, in the British town of Tamworth, Staffordshire, forcing the site to close.

BREAKING: Activists scale & occupy Israel's arms factory in #Tamworth — another one of Elbit's death factories is under the control of #PalestineAction. We #ShutElbitDown again! pic.twitter.com/5Fi1a8WDgZ

Elbit is Israel’s largest arms manufacturer, and has 10 sites across the UK, including factories and offices.

A spokesperson for Palestine Action said: “For the sake of the protection of life and human rights, direct-action against Elbit Systems is a moral duty.”

Activists sprayed red paint across the front of the factory, which, according to the group, was used “to symbolise the bloodshed by Elbit's weapons in Palestine and across the world”.

The closure of the Tamworth site came less than a week after the forced closure of a factory operated by a subsidiary of Elbit Systems in the city of Leicester, following similar activism by the same group.

The closure of both the Leicester and Tamworth sites has led to the disruption of Israeli arms production in the UK.

In Leicester, the Elbit-Thales' UAV Tactical Systems drone factory has been shut for six consecutive days, in what the group calls "the longest continuous occupation yet undertaken by Palestine Action".

Monday night saw the arrest of two Palestine Action activists, who had scaled the roof of the Elbit Systems factory in Leicester.

Attempts to remove the arrested activists from the site have so far been unsuccessful, with members of the local community resisting police efforts to leave with the detainees by reportedly blocking the entrance to the factory.

Hundreds of local community members in Leicester were reported to have rallied in support of Palestine Action last night by chaining gates and erecting barricades, as well as by blocking the removal of detainees for over six hours.

The people in #Leicester are currently barricading the gates to prevent the police removing activists from Israel’s arms factory, whilst the police prepare riot gear.

No matter what the police do, the people will #ShutElbitDown for good! pic.twitter.com/5jSOC11yWh

Police move in to protect Israel’s arms industry by attacking the community who is fighting for humanity. We shall not be moved #ShutElbitDown pic.twitter.com/FVlLS2fCSo

Shocking and disgusting use of force on people outside Elbit’s drone factory in Leicester. Full solidarity with @Pal_action and protesters there now, this is the resistance. ✊🏼🇵🇸#ShutElbitDown pic.twitter.com/JatIBTG01d

Leicestershire police should be ashamed of themselves. The unnecessary use of force and violence on protestors has been awful. We were threatened with arrests at the end on a ‘dispersal order’ for ‘walking too slow’ and standing in the petrol pump down the road too #ShutElbitDown pic.twitter.com/4TYMfGS9fV

Meanwhile, the group itself condemned the action taken by police, saying in a statement: "This shows the desperation that the police have reached, detaining those who dare to show solidarity with the Palestinian people so that Elbit's business of bloodshed may continue."

Leicestershire Police Assistant Chief Constable Kerry Smith, who was Gold Commander on the policing operation, told Middle East Eye: “We support the right to protest, which is a fundamental human right, however this must be done legally. Criminal damage such as we have seen here cannot be ignored and as such it is only right that the protesters have been arrested”

Online, the hashtag #ShutElbitDown has been used in support of the activism by Palestine Action.

#ShutElbitDown shut down the factory which makes these horrible weapons of destruction. they've been the cause of Palestinian suffering palestinian death and grief... the way Israel uses advanced weapons against literally rocks and protesting is sick

The group has shown no sign of slowing down following the closure of the two sites, confirming in a statement that “Palestine Action will not stop until we shut Elbit down for good". Occupation
Tens of thousands protest in London in solidarity with Palestine