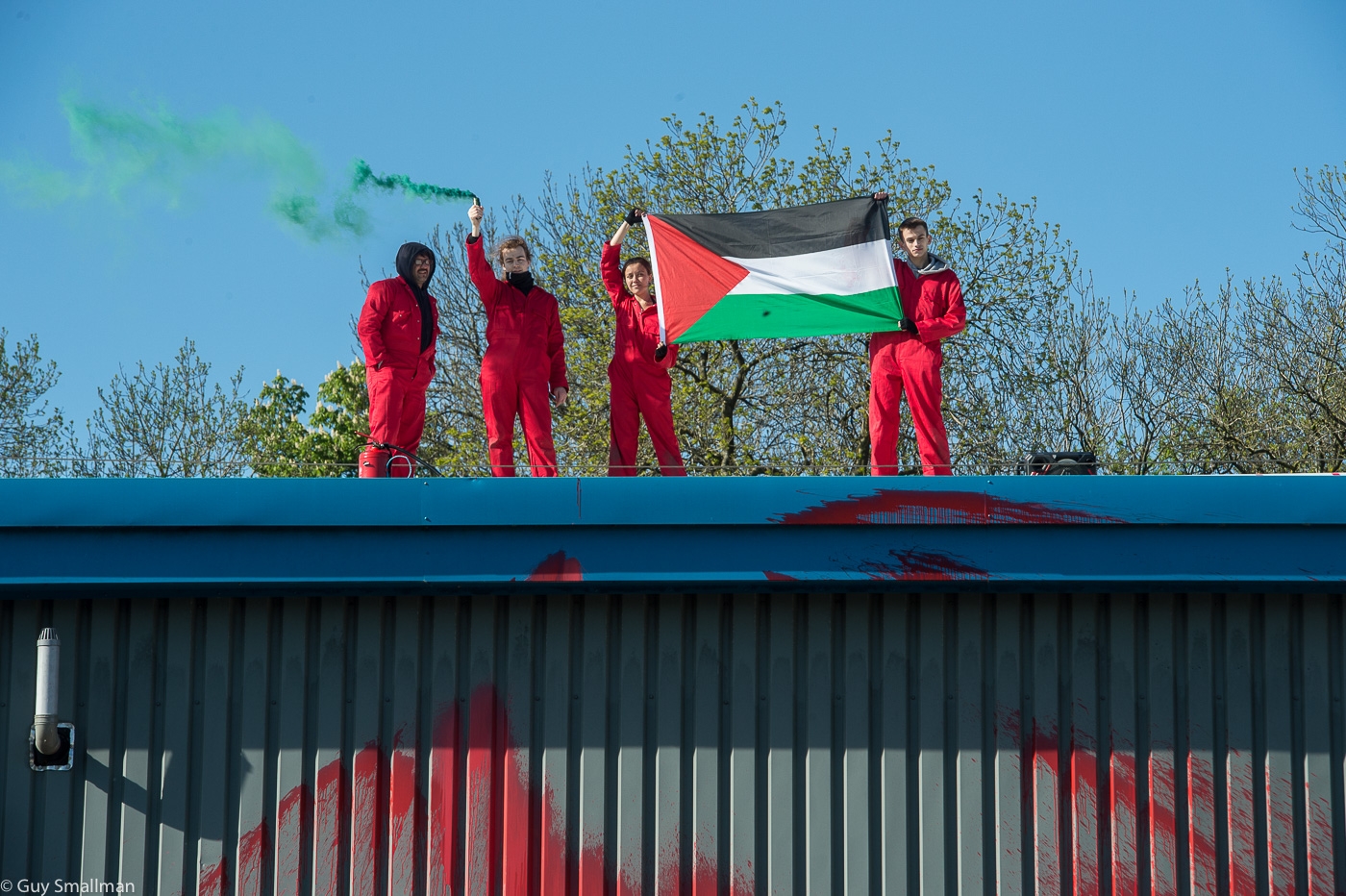 Activists scaled the UAV Tactical Systems building in an industrial area of Leicester and brought operations to a halt (Palestine Action/Guy Smallman)
By
Shafik Mandhai
in
Leicester, UK

Pro-Palestinian activists in the English city of Leicester have shut down a factory operated by UAV Tactical Systems, a subsidiary of the Israeli arms manufacturer Elbit Systems.

Middle East Eye counted four activists on the roof of the factory on Wednesday wearing red overalls and waving the Palestinian flag.

Around a dozen other activists protested outside the site in an industrial park on the outskirts of the city, as police officers sealed off entrances into the facility.

The factory builds unmanned aerial vehicles that the protesters say have been used by Israel to attack the Gaza Strip.

The takeover of the building comes amid Israel’s bombing campaign in the besieged territory, which at the time of writing has killed at least 219 Palestinians, including 63 children and 36 women.

“Elbit tests its weapons on Palestinians and uses Gaza and the West Bank as live testing sites,” said Huda Ammori of Palestine Action, one of the groups behind the protests at the site.

Protesters chanted slogans criticizing Israeli violence against Palestinians, and trucks arriving at the factory were directed away by police officers.

Anger was directed not only at the Israelis but also at the British government over what the activists say is a “genocide” of Palestinians.

“All the politicians, especially Boris Johnson, who is taking the Palestinian genocide lightly, are complicit,” said Ferhat Ulusu, one of the activists who scaled the factory in the early hours of Wednesday.

In a message delivered to MEE, he added: “Everyone who keeps silent is complicit. (Time) to shut Elbit down now. Enough is enough.”

In a statement, Leicestershire Fire Brigade Union said its members were called to the scene but did not take any further action beyond ensuring the safety of those participating in the protest action.

"Union officials immediately reminded senior managers that as firefighters, we are, and remain, a proud humanitarian service and our role does not involve law enforcement," the union said in a statement.

"The Fire Brigades Union stand in support of Palestinian solidarity and the right to protest."

UAV Tactical Systems describes itself as an electronic manufacturing company on its LinkedIn page.

One drone produced by the company is the Skystriker “suicide” drone, which can loiter in the air for hours before homing in on a target and detonating its payload.

The model was used by Azerbaijan in its recent conflict with Armenia over the Nagorno-Karabakh region.

The takeover in Leicester is the latest in a series of direct action protests by pro-Palestinian activists against Elbit.

Past protests have taken place at sites linked to the company in the county of Kent, the Greater Manchester area, and London, among other places. On Tuesday, Palestine Action activists targeted a factory in the northern town of Oldham, blockading a factory there.

In February, Huda Ammori and Richard Barnard, co-founders of Palestine Action, had their addresses raided by police, who seized their passports. The raid was linked to an earlier shut down of an Elbit factory in Oldham.

Six activists, including the pair, could face trial over their alleged participation in the shutdowns. In previous cases, charges have been dropped by the Crown Prosecution Service.

Shock at Elbit presence in Leicester

Given the ongoing legal cases, many of the protesters at the site on Wednesday were reluctant to give their names when speaking to MEE, fearing potential ramifications.

One young man, who gave his first name as Umar, said that he was moved to join the protests at the factory after his experiences witnessing the treatment of Palestinians in occupied East Jerusalem and the West Bank.

“All of that (treatment of Palestinians) exists because companies like this (Elbit),” he said. Israel-Gaza: Palestinian father and daughter are family's only survivors of a deadly airstrike
Read More »

“These people develop drone technology and that technology is used in drones that Israel uses to bomb, kill and terrorise Palestinians, including children.”

Despite knowing about the presence of the factory in Leicester for years, Umar said it still shocked him that an Israeli weapons manufacturer was operating so close to home.

Leicester, known for its multicultural population, is home to one of the first local councils in the UK to boycott goods produced in Israeli settlements in occupied Palestinian land in the West Bank.

The boycott, which began in November 2014 was challenged by pro-Israel groups and condemned as anti-Semitic. But legal challenges to get the local authority to drop its stance failed in 2018 when judges ruled in the council’s favour.

“There are a lot of people here (in Leicester) who are completely against the Israeli occupation of Palestine,” Umar said, adding: “They should know that there are companies like this (Elbit), which are making the stuff that’s killing people.”

For others in the area unconnected to the protests, there was shock that a factory linked to an Israeli arms manufacturer was operating in the city.

One local man, who also only agreed to give his first name, Salim, said: “I don’t feel good knowing they’re making these parts in Leicester.”

Middle East Eye has reached out to UAV Tactical Systems for comment. 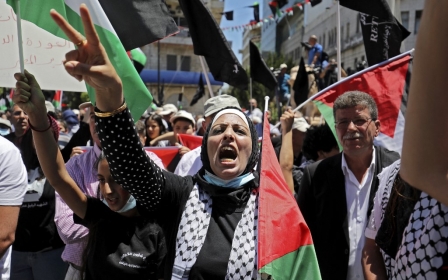