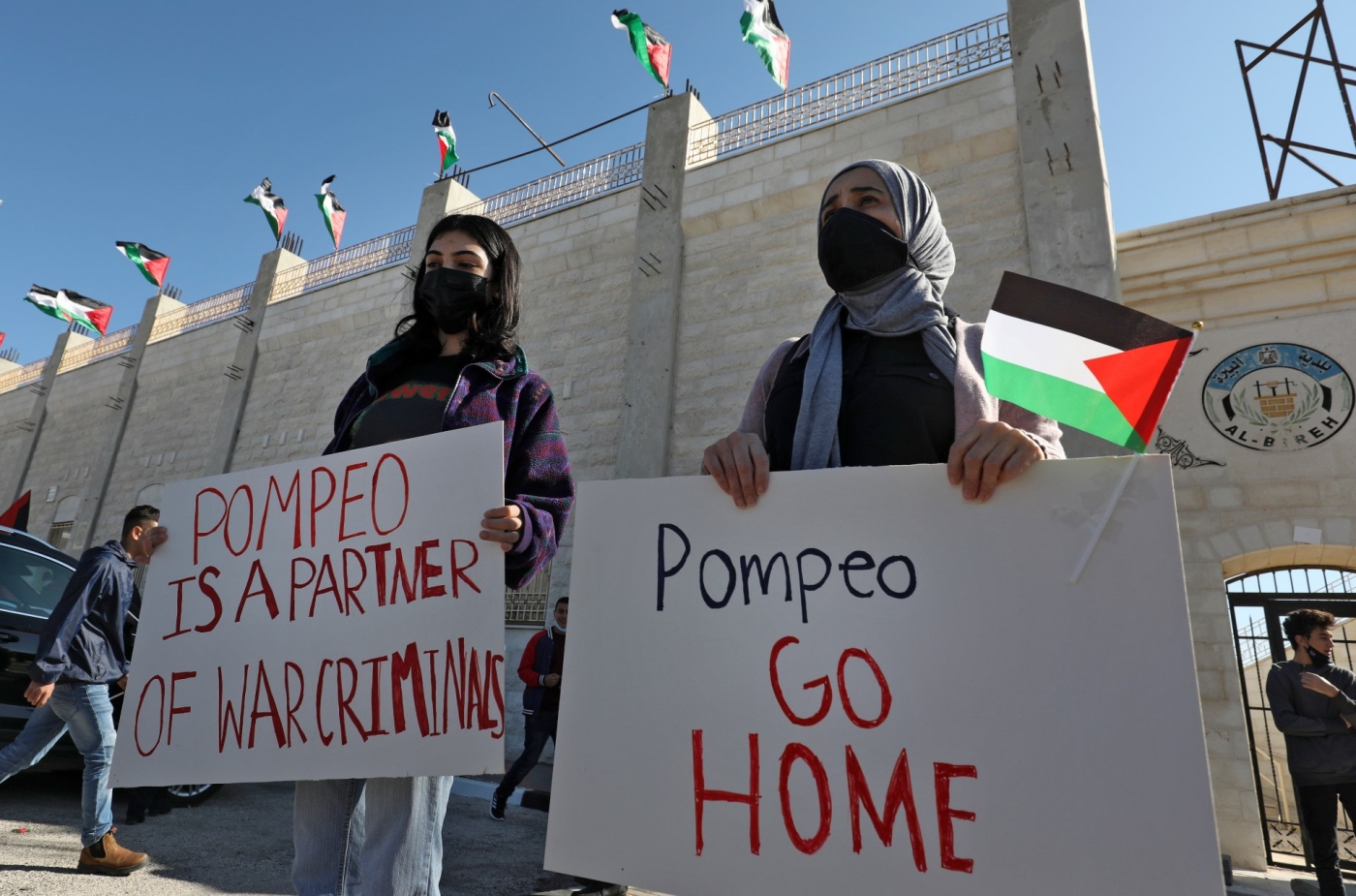 Palestinians demonstrate near the Israeli settlement of Psagot against the visit by Mike Pompeo (AFP)
By
Akram al-Waara
in
Al-Bireh, occupied West Bank

Thundering booms and clouds of smoke adorned the entrance to Psagot on Wednesday morning in anticipation of US Secretary of State Mike Pompeo’s arrival at its Israeli winery. But these were no welcoming fireworks.

Hundreds of Palestinian protesters had gathered to rail against the first visit of a US diplomat to an illegal Israeli settlement in the occupied West Bank, and Israel’s military were quick to respond with tear gas and sound bombs.

The Psagot settlement was established in 1981 on the lands of al-Bireh, just outside Ramallah city in the central West Bank. The hill where the settlement is built is known by Palestinians as Jabal al-Taweel and is the site of dozens of acres of privately owned Palestinian land.

US President Donald Trump’s outgoing administration has been a staunch supporter of the settler movement, and his secretary of state was breaking years of convention and international consensus by visiting Psagot’s vineyard. 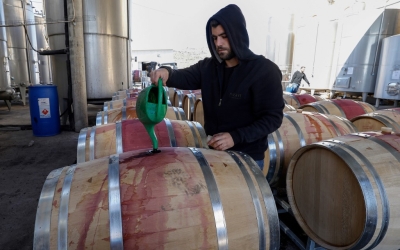 In response, Palestinians headed to a valley between the settlement and al-Bireh, waving Palestinian flags and chanting slogans against the Israeli occupation and US government. Dozens of Israeli soldiers met them with force, and a few protesters subsequently required medical treatment for tear gas inhalation.

“We are here today to stand against the visit of Mike Pompeo to this illegal settlement, which was built on stolen Palestinian land,” Muafaq Sahweil, a Fatah movement leader in Ramallah and one of the protest’s organisers, told Middle East Eye.

“For the secretary of state of the United States to set foot inside an illegal settlement is a complete insult to all international accords and agreements on the settlements, and is a flagrant violation of international law,” Sahweil, 50, said.

Sahweil stressed that while the protesters had little hope of their messages reaching officials in the Trump administration, they felt it was important to “show any future American governments, politicians and leaders that they cannot trample on the rights of Palestinians for their own political gains”.

“And to Mike Pompeo: your presence today in this settlement is illegal, and is an insult to our basic human rights as Palestinians,” he said.

Pompeo and other top US officials have been heavy backers of Israeli Prime Minister Benjamin Netanyahu’s right-wing government, and some in the administration have even donated to the settler movement.

Last year, Pompeo broke with decades of US foreign policy in the region when he announced the US would no longer be considering settlements as illegal, a move that drew widespread criticism from Palestinian and international officials.

The policy change did not, however, prompt any similar changes within the international community, which continues to acknowledge that Israeli settlements on occupied Palestinian land are illegal.

Despite Pompeo's and Trump’s recent history, Palestinian protesters said they still found the secretary of state’s visit surprising and deeply significant to their struggle.

“This visit helps legitimise the Israeli occupation, and gives settlements like these more power to continue expanding and taking over Palestinian land,” Sahweil said. He added that Pompeo’s visit should not be normalised by the international community, for fear of what it might do to any future peace process.

“Every time a new settlement is built, it makes the peace process and negotiations more complicated,” Sahweil said. “It’s clear that the Trump administration is trying to solidify whatever pro-Israel policies they can before they are kicked out of office in less than two months.”

Jamal Salem, a resident of al-Bireh and one of Jabal al-Taweel’s landowners, echoed those sentiments.

“Pompeo’s visit today is not just an act of political aggression, but it’s a personal attack on the Palestinian landowners of Jabal al-Taweel, like myself,” Salem, 74, told MEE.

“I own more than 32 dunums of land near the entrance to the settlement, and on the mountain itself,” Salem said. “But for decades I have been prevented by the Israeli occupation from even accessing the land to farm or visit it.”

Salem said it was not fair that he, who has deeds proving ownership of land on Jabal al-Taweel, cannot visit the settlement, but officials like Pompeo can go there freely and without consequence.

“These visits don’t help peace, it just makes things worse on the ground, and emboldens the settlers and their plans for expansion and annexation.”

On top of Pompeo’s presence in Psagot, his visit to the Psagot winery was particularly offensive for Palestinian landowners such as Salem, whose families once used to farm the grapes that are now harvested, turned into wine and sold by the settlers.

“This settlement stole our land,” Salem said. “If it wasn’t for this settlement, we would be able to farm the land and our grape vines, instead of the settlers who now own the winery there and profit off our land.”

Salem pointed out that he, along with most of the Palestinians who own land on Jabal al-Taweel, are also American citizens.

“If we were Israeli Americans, the US government would be supporting us to build wineries and settlements, like they are doing with the people in Psagot,” he said. 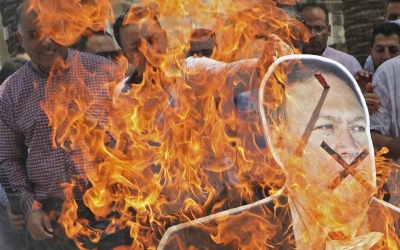 “But because we are Palestinian Americans, our own government does not care about our rights. It’s clear that this is Trump’s last gift to the Israelis before he leaves the White House.”

Ninety-year-old Odeh Hamayeh also owns land on Jabal al-Taweel, but has been unable to visit his land for decades - something that to this day brings tears to the old man’s eyes.

“Every once in a while, I still go to the mosque in al-Bireh that overlooks the mountain,” Hamayeh told MEE. “Just so I can get a glimpse of my land, and the land that was passed down to me from my father and grandfather.”

“But when I look at my land, knowing that I can’t go there, it breaks my heart,” he added, his eyes welling up with tears, his voice cracking.

“All I want is to visit my land and take my children and grandchildren there, but I can’t.”

Hamayeh stressed that it was Palestinian families like his that planted the olives, figs and grapes on Psagot’s land - “but the settlers took that away from us”.

“If Pompeo was a human being, and knew how much that land means to us, he shouldn’t have gone there today.” 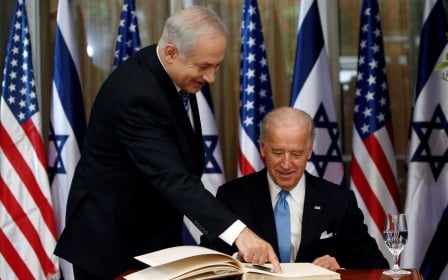 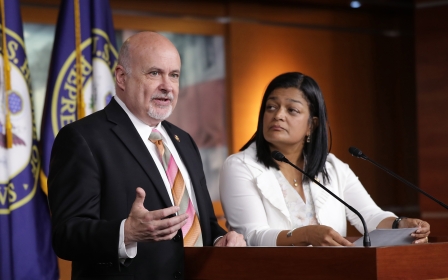 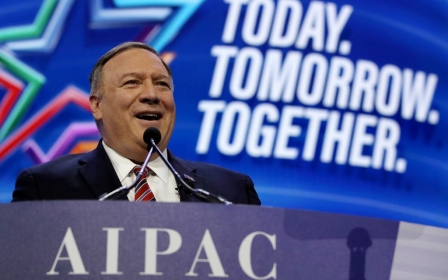