Explained: Who are Israel's Palestinian citizens?

With demonstrations breaking out across Israel by the state's Palestinian minority, MEE takes a look at an often misunderstood community 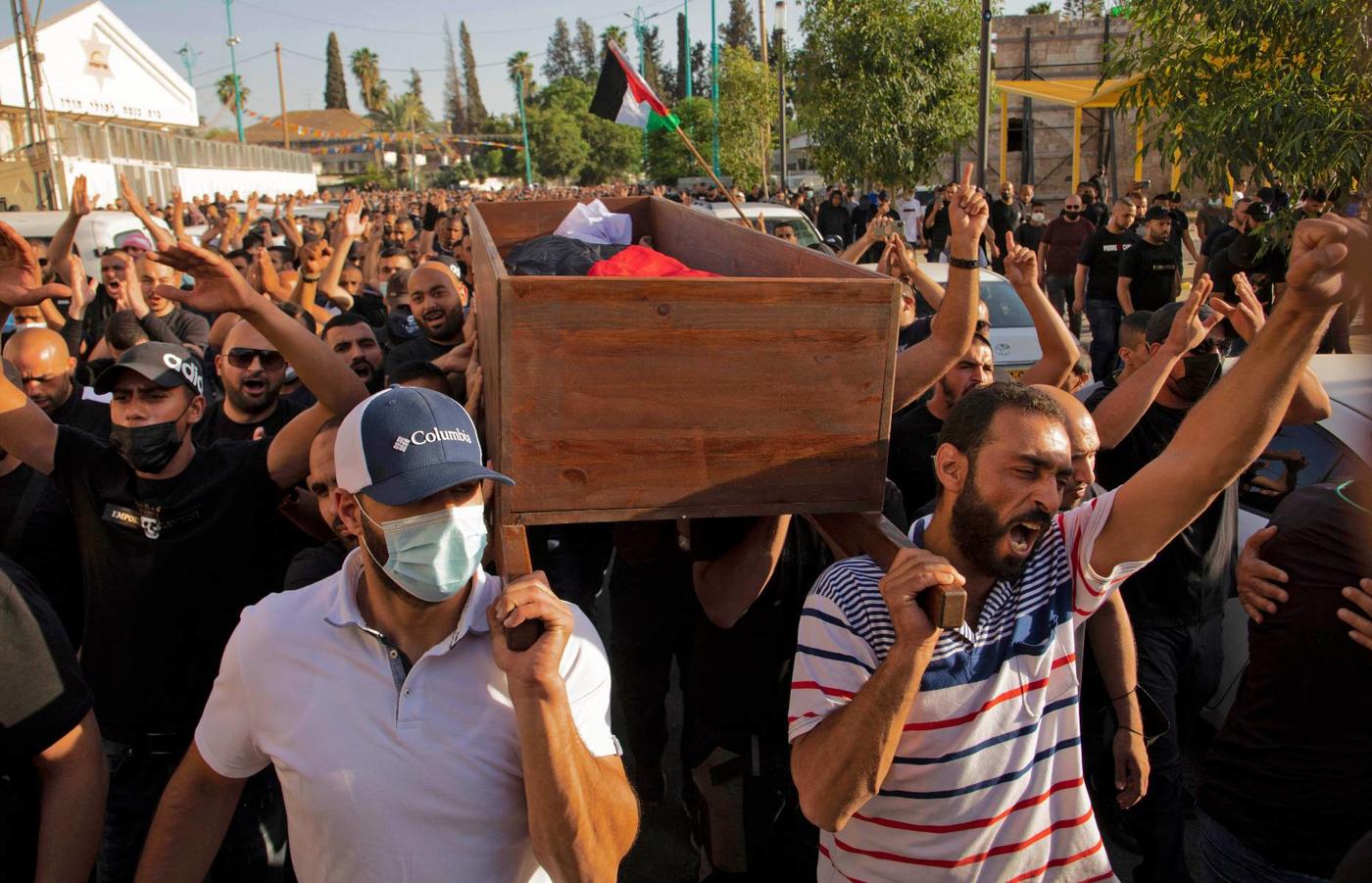 Palestinians in Israel carry the coffin of Mousa Hassouna, killed during demonstrations, in Lod on 11 May 2021 (AFP).
By
Alex MacDonald

The explosion of anger that erupted this week in the city of Lod took many in Israel by surprise.

Palestinian citizens of Israel tore down Israeli symbols and put up the Palestinian flag in the mixed Arab-Jewish city, which is located within the internationally recognised borders of Israel.

Although Palestinians in Israel have regularly supported Palestinians in the occupied territories before, the scale and nature of the demonstrations in Lod, known as Lydd in Arabic, indicates how the relationship between the two groups is stronger than ever.

But this relationship has often been fraught. Many so-called '48 Palestinians - those who live within the borders of the state founded in 1948 - have a genuine grievance about their history, insisting that they did not join Israel, but that Israel joined them by taking over their homes. Sometimes they use the word "occupation" to describe their status within the 1948 borders of Israel.

The rest of the world - as well as many Israelis - still misunderstand the lives and motivations of a group that makes up an estimated 20 percent of the Israeli population.

Who are the Palestinian citizens of Israel?

While the term "Arab-Israeli" is sometimes used to describe Palestinian citizens of Israel, many call themselves "48 Palestinians", in reference to the year of Israel's creation.

In 1948, the state of Israel was declared. For Israelis, this came after what they regard as their war of independence - but f0r Palestinians it was the start of the Nakba, or "catastrophe".

But many Palestinian Arabs remained in their homes and within the boundaries - known as the "48 borders" - of what is now called Israel. They were granted citizenship - but they did not live as equal citizens.

Between 1949 and 1966, those Palestinian Arabs were governed by military rule and subjected to travel permits, curfews and detention. They were also expelled from their homes and land, which were often given to Jewish settlers or state-backed bodies.

Since 1966 and the end of military rule, there has been a growth in public expressions of political consciousness from Palestinian citizens of Israel.

They include events such as Land Day, which marks the killing in 1976 of six unarmed Palestinians demonstrating against the expropriation of land in the Galilee by the Israeli state. It is now commemorated every year, and has become a protest against Israeli colonisation, when political organisations including the Israeli Communist Party and the Black Panthers brought together Palestinians with left-wing Jews and Jews from Arab lands.

But still, Palestinian citizens of Israel have often found themselves in a difficult bind.

At one point some Palestinian citizens of Israel tried to disguise their identities by adopting Jewish names and speaking only in Hebrew among themselves, only to find themselves looked down upon by the Palestinian diaspora and those in refugee camps.

But for a long time other Arab governments also viewed them with suspicion for accepting Israeli citizenship and taking part in the country's institutions.

In Israel, they are often viewed as traitors. Their organisations and parties are regularly banned and their leaders are prosecuted.

Are they equal citizens?

Supporters of Israel regularly deflect accusations of "apartheid" made against the state by pointing to the rights enjoyed by Palestinian citizens of Israel, as well as the success of prominent public figures from the Palestinian community.

Such an argument willfully misinterprets the point: the "apartheid" label is usually used to criticise the treatment of Palestinians in the occupied territories, including the West Bank and Gaza.

It is also inaccurate to say that Palestinian citizens of Israel enjoy equal rights and status in the country compared to Jewish Israelis.

Much of the discrimination relates to land ownership. The Jewish National Fund (JNF), a state-backed international body founded in 1901 for the purpose of buying and distributing land in historic Palestine, is thought to own around 13 percent of all Israeli land.

Part of the JNF's remit is to distribute the land it owns only to Jews, something which Adalah, the main advocacy group for minority rights in Israel, has described as a "discriminatory policy [that] contributes to the institutionalization of racially segregated towns and villages throughout the state."

Adalah has compiled a further list of Israeli laws that explictly discriminate against its Arab citizens.

In 2018, in an egregious example of legislative discrimination, the Knesset passed the Nation-State Law which officially declared, in Prime Minister Benjamin Netanyahu's own words, that Israel is "the nation-state of the Jewish people - and only it."

Result: Palestinian citizens of Israel have more rights than Palestinians in the occupied territories, including voting, taking office, use of the civilian courts etc. But there are a host of laws that reduce them to second-class citizens when compared to Jewish Israelis.

Are they Arab-Israelis or Palestinians?

The relationship between Palestinian citizens of Israel and their sense of Israeli, Arab or Palestinian identity is complex.

Polls in 2003 and 2017 showed that the majority of the Arab population of Israel regard themselves as "Palestinian", although another survey in April 2020 by the Jewish People Policy Institute appeared to suggest otherwise.

Regardless, since the creation of Israel, successive governments and most media have almost always used the term "Arab-Israeli" to describe its Palestinian citizens.

Much of this has been regarded by critics as an attempt to erase Palestinian identity. Infamously, then-Israeli Prime Minister Golda Meir commented in 1969 that it was "not as if there was a Palestinian people in Palestine and we came and threw them out and took their country away from them. They did not exist.”

While some Palestinians in Israel call themselves "48 Palestinians", others describe themselves as "67 Palestinians". They usually live in the areas occupied by Israel after the 1967 war, such as the West Bank, Gaza and East Jerusalem.

Meanwhile, the Druze citizens of Israel - who are mainly centred around northern Israel and the occupied Golan Heights - have comparatively tended to identify more as "Arab" or simply "Israeli" when compared to other non-Jewish communities. While Christian and Muslim Palestinians are exempt from military service, Israeli Druze are not.

Many reasons have been given for the "favoured minority" status accorded to the Druze in Israel. Certainly they have been cultivated by Zionist leaders since the 1920s as allies against the Christan and Muslim groupings.

But in recent decades many Druze have broken away, citing similar levels of poverty and discrimination to Palestinian Muslims. The passing of the Nation-State law in 2018 was a particular blow to the perception of Druze as a "loyal" minority in Israel.

Palestinian citizens of Israel have long faced a series of dilemmas when it comes to Palestinian political and national aspirations.

On the one hand many want to maintain their ancestral homes within Israel and benefit from the comparatively higher standard of living in Israel; on the other, they identify strongly with the desire for Palestinian nationhood and self-determination.

Nowhere has this been more problematic than the discussions around the two-state solution. In the past, numerous Israeli politicians have suggested that, should a Palestinian state be established, there would need to be land swaps, forcing Palestinian citizens of Israel into the new state in exchange for Israeli settlers.

For Palestinian citizens in Israel, politics frequently focuses on civil rights issues and the ending of Jewish privileges within Israel.

Today, Hadash - the successor to the Israeli Communist Party - is the leading contingent in the Joint List, the main Arab political party in Israel. The coalition comprises a range of different political movements, from the Marxist-Leninist Hadash to the secular Arab nationalist Ta'al and Balad.

Until recently, the Islamist United Arab List was also a member, but it left in 2021 over disputes including the other parties' socially liberal and secular tendencies. 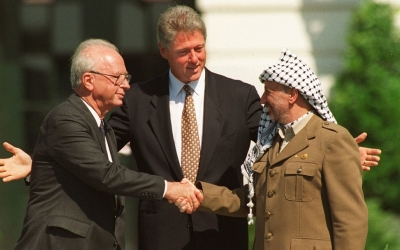 Numerous members of the Joint List and its component parties have been prosecuted and Knesset members have had their immunity lifted.

In particular, Ayman Odeh, head of the Joint List, has tried to campaign on a civil platform that encompasses both Jews and Palestinians in Israel, as well as other marginalised groups.

"Weeks of violent and agitated repression by the Netanyahu government and the burning of territory in Jerusalem exploded tonight for all of us inside," he tweeted, in Hebrew, on Tuesday, in response to Israeli strikes on Gaza.

"Especially on such days we must act together, Arabs and Jews, against incitement and violence, siege and occupation, and for peace and security for all." 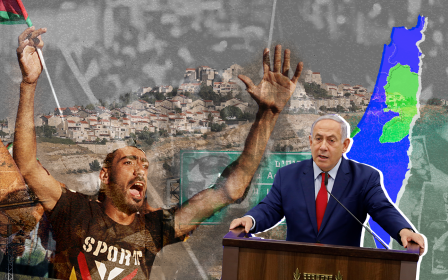 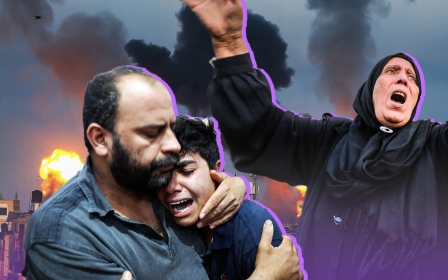