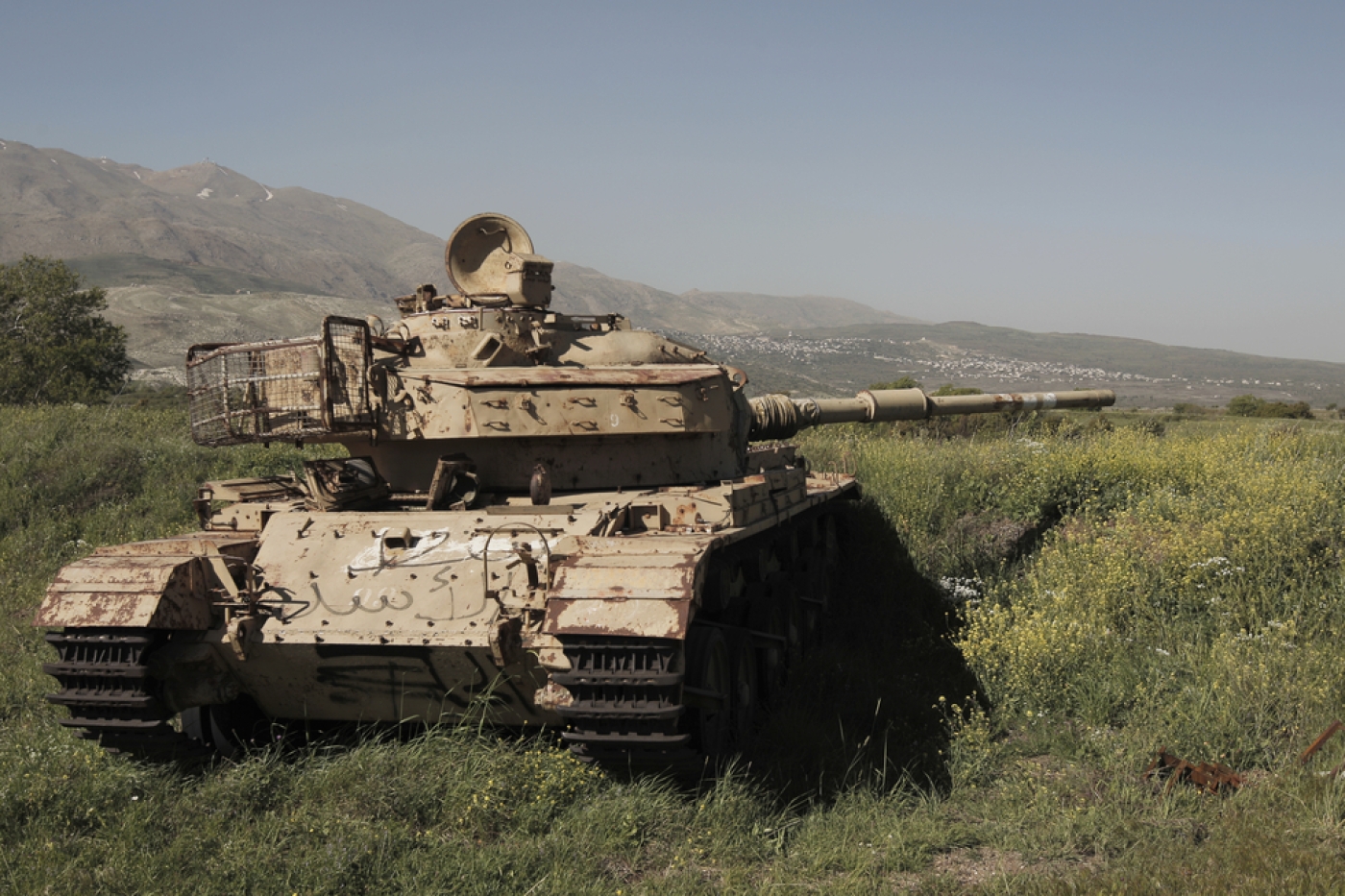 The wreckage of a tank in the Israeli-occupied sector of the Golan Heights, opposite the Syrian village of Hadar, on 17 April 2016 (AFP)
By
Hagar Shezaf

Israel's concerns have increased over Syria's civil war because of the growing influence wielded by Iran and its proxies in their northerly neighbour, according to several former diplomats who spoke to Middle East Eye.

Throughout the five bloody years of Syria’s civil war, in which more than 250,000 people have been killed, Israel has claimed to have had no clear strategy other than to remain neutral.

However, with regional foe Iran playing a crucial role in protecting their ally President Bashar al-Assad, Israel has become increasingly concerned about what lies beyond its northern border, which has prompted a more considered approach to the conflict, according to a senior former diplomat.

“The Israeli security establishment believes that the main threat Israel is facing in Syria is in fact Iran and its local proxies like Hezbollah," said Tzvi Magen, a former diplomat and now a senior researcher at Israel’s Institute for National Security.

“Israel is mostly concerned with the growing strength of the Iranian axis."

Though Assad is no friend of Israel, under his rule the border between Syrian-controlled territory and the Israeli-occupied Golan Heights was known to be calm and stable.

The border stability that the Assad government had assured in the past has led some Israeli policymakers to regard the Syrian president as the “known devil” and a safer option than any potential new player, be it a democratically elected government or Islamist groups.

Other Israeli policymakers are content with the fact that Middle Eastern powers are busy with issues that do not involve Israel, echoing the sentiment in the famous quote of late prime minister Menachem Begin who, during the Iran-Iraq war, “wished success to both sides”.

Exponents of this policy may view the losses suffered by Lebanese Shia militia Hezbollah, a longtime Israeli enemy viewed as an Iranian proxy, on the Syrian battlefield as a positive event, but in recent months it has become increasingly apparent that Israel has concerns about the valuable military experience Hezbollah has gained from fighting alongside Assad’s forces in Syria.

Prime Minister Benjamin Netanyahu admitted for the first time on 11 April that Israel had bombarded shipments of arms that were reportedly en route to Hezbollah.

This announcement was preceded by an earlier statement by the Israeli ambassador in Moscow, claiming that Russia had assured Israel it was not transferring any weapons to Hezbollah.

The statement signalled both Israel’s concern over Hezbollah’s growing influence in Syria and its coordination with Russia, whose intervention in the Syrian civil war has both risks and opportunities for Israel, a former senior defence official told MEE.

“On the one hand, [the Russians] working with the Iranians and the Hezbollah could be a threat,” said Ran Ben Barak, former director of Israel’s Strategic Issues Ministry. “But on the other hand Russia is someone we can talk to, someone who can restrain adverse forces.”

Relations between Israel and Russia are historically complex. Moscow supported Israel’s establishment in 1948, then later threatened to attack Israel during its wars with Arab nations in 1967 and 1973.

Russian President Vladimir Putin has proved amenable to an open, positive relationship with Israel. He is the only Russian leader to have visited Israel. In 2014, he expressed sympathy for Israel's efforts to protect its citizens to a delegation of rabbis visiting Crimea soon after Russia seized the territory, although Putin called Netanyahu and urged him to halt Israel's assault on Gaza.

Israel’s pragmatism in its foreign policy is shown by the country’s willingness to engage with Russia despite Moscow’s work alongside Iran in Syria, although some say this approach is a reaction to the situation that the US has allowed to arise rather than one Israel would have chosen.

“Israel is saying: ‘Well, we have reached a situation that the US could have prevented but didn’t’,” former diplomat Magen said. “The Americans could have prevented the Russians and their allies from reaching so close to our border, but since they haven’t - of course we will talk with them.”

Israel is coordinating with Russia on several issues, including the use of Syrian air space, which would appear to allow Israeli jets the opportunity to attack arms transfers so long as they are destined for Hezbollah.

When Samir Kuntar, a senior Hezbollah operative, was killed in December 2015 in an air strike in Damascus, all the signs pointed to an Israeli attack.

While Israel has never officially claimed responsibility, the event is regarded as an achievement in its fight against Hezbollah’s attempts to establish an armed presence in the Golan Heights.

If Israel did carry out the assassination as many suspect, it would reveal Israeli intelligence capabilities in Syria and its close coordination with Russia, without which it could not have carried out this action in Syrian air space, the former defence official said.

Though Russia and Hezbollah find themselves fighting on the same side, Russia has its own interests and sees Israel as a vital partner to be recruited, or at least placated, if Russia is to maximise its influence over the Middle East.

This has led Russia and Israel to agree on coordination in Syria, or “deconfliction”, as described in a recent account by King Abdullah of Jordan during a briefing to members of the US Congress which was revealed by MEE.

In the briefing, Abdullah described his country’s close cooperation with Israel and how both countries are dissatisfied with perceived US inaction in Syria.

However, Israeli coordination with Russia should in no way be seen as a sign that Israeli officials see the current situation as satisfactory.

Assad’s tightening relations with Hezbollah might not threaten Israel in the short term, but if Assad emerges victorious, a Hezbollah and Iranian presence on Israel’s border is a possibility, and one which officials identify as a “red line”.

“While the different rebel organisations understand that if they mess with us, we will weaken them in a way that will disturb their fighting wi­thin Syria, Hezbollah doesn’t hold to the same logic,” said Ben Barak.

“As a non-local organisation which gets its orders from Iran, it does not care about the local population and the repercussion of its deeds, which is one reason that it is perceived as a bigger threat” by Israel.

Recent moves by Saudi Arabia to halt aid to Lebanon over Hezbollah’s fighting in Syria indicate that Israel is not the only country that fears the growing influence of Iran and Hezbollah.

The recent visits to Russia by Israeli officials could be a sign that the country is trying to influence Syria peace talks taking place in Geneva and to ensure that the threat of the “Shia axis” and Israel’s other interests are being taken into account.

Communication with the rebels

The potential threat of a future Iranian and Hezbollah alliance along Israel’s northern border has forced it to attempt to take advantage of the current situation in which there is a near total absence of Assad forces in the border area.

Despite groups including al-Qaeda affiliate al-Nusra Front operating near their northern border, Israel has developed a set of practices and connections with the various rebel fighters.

“The limited communication we have with the rebel groups allows us to stay informed,” said Uri Lubrani, a former adviser to Israel’s Ministry of Strategy. “But we don’t allow ourselves to be identified with one side, so we can always talk with the others as well.”

Israel’s strategy on this front involves two main concerns - establishing goodwill relations with the new forces while maintaining its military influence and deterrence.

While Assad has always maintained that resistance to the Israeli occupation of the Golan and solidarity with the Palestinians are key political stands, the new rebel groups operating in the border area prioritise other issues.

Both the Nusra Front and the local faction of the Free Syrian Army known as the Southern Front have declared time and again that their enemy is Assad and no other.

Part of this prioritising may be down to the fact the Southern Front is highly dependent on Israel’s close ally, Jordan. As a recent International Crisis Group report highlights, Jordan’s tight control over its border with southern Syria has meant that foreign fighters and donors have been kept to a minimum among these rebels.

Most fighters in these groups are locals concerned with the internal Syrian conflict, and they are eager to avoid the prospect of Israeli attacks on their villages.

Beyond the threat of being bombed, rebel groups have also been receiving humanitarian aid, which Israel claims to have been handing out to all forces active near its borders.

Nir Boms, an Israeli scholar who is well informed on the provision of humanitarian aid, said that around 2,600 Syrians have received medical treatment in Israel since the war begun.

“It started almost by accident, after an Israeli officer let one wounded Syrian into Israel for medical treatment, and continued with the establishment of an Israeli field hospital in the Golan Heights,” he said.

Israeli humanitarian organisations have transferred blankets, medicines, and baby food to Syrian villages. Some of this aid was intentionally marked in a way that would allow Syrians to know that the aid they received was from Israeli NGOs, Boms wrote in a December 2015 memo for the Institute for National Security Studies.

While Israel claims that humanitarian aid efforts are not directly coordinated with any of the warring sides, their effectiveness as a means of influence is proven.

In June 2015, Israeli Defence Minister Moshe Ya’alon revealed that Israel’s humanitarian aid to the rebel groups was given on condition that they refrain from letting “terror organisations” reach the border and that they avoid attacking the Druze who reside in the area.

One particular example is the Druze village of Khader, on the Syrian-controlled side of the Golan, which is known to be loyal to the government but is surrounded by rebel groups.

“Khader is covered by Israeli firepower, and that is why it is the one place that was not taken over,” said Saleh Tarif, Israel’s former minorities minister and a well-known figure in the Israeli Druze community.

“The Druze community in Israel is very worried by the situation, and the fact that many of us served in the Israeli army helps guarantee that our relatives on the other side of the border stay protected.”

Though Druze in Syria are considered to be loyal to Assad, Tarif said that many have refused to serve in the Syrian army in distant parts of the country, opting instead to remain in Khader or in the Jabl al-Druze region, defending their own communities.

Others have suggested that Israel’s firm support of the Druze in Syria has more to do with its desire to dissuade Druze citizens of Israel from joining the war and avoid the possibility of Syrian Druze seeking asylum in Israel, a situation that would put Israel at unease with the local Druze community and could change the balance of forces in both the Israeli-occupied and the Syrian-controlled parts of the Golan Heights.

The delicate balancing act Israel has had in its policy towards the Syrian Druze is reflective of its wider engagement with the Syrian civil war, walking a line between US reluctance to become overly engaged and Russian advances to shape the conflict’s power balance.

For the moment, Israel has managed to prevent attacks along its northern border, but if Assad shows signs of trying to take back the south, leading to an Iranian and Hezbollah presence, then Israel may be dragged into the war.