Syria accuses Israel of aiding Islamic State, as it said the jet was fired on as it took part in operations against the group 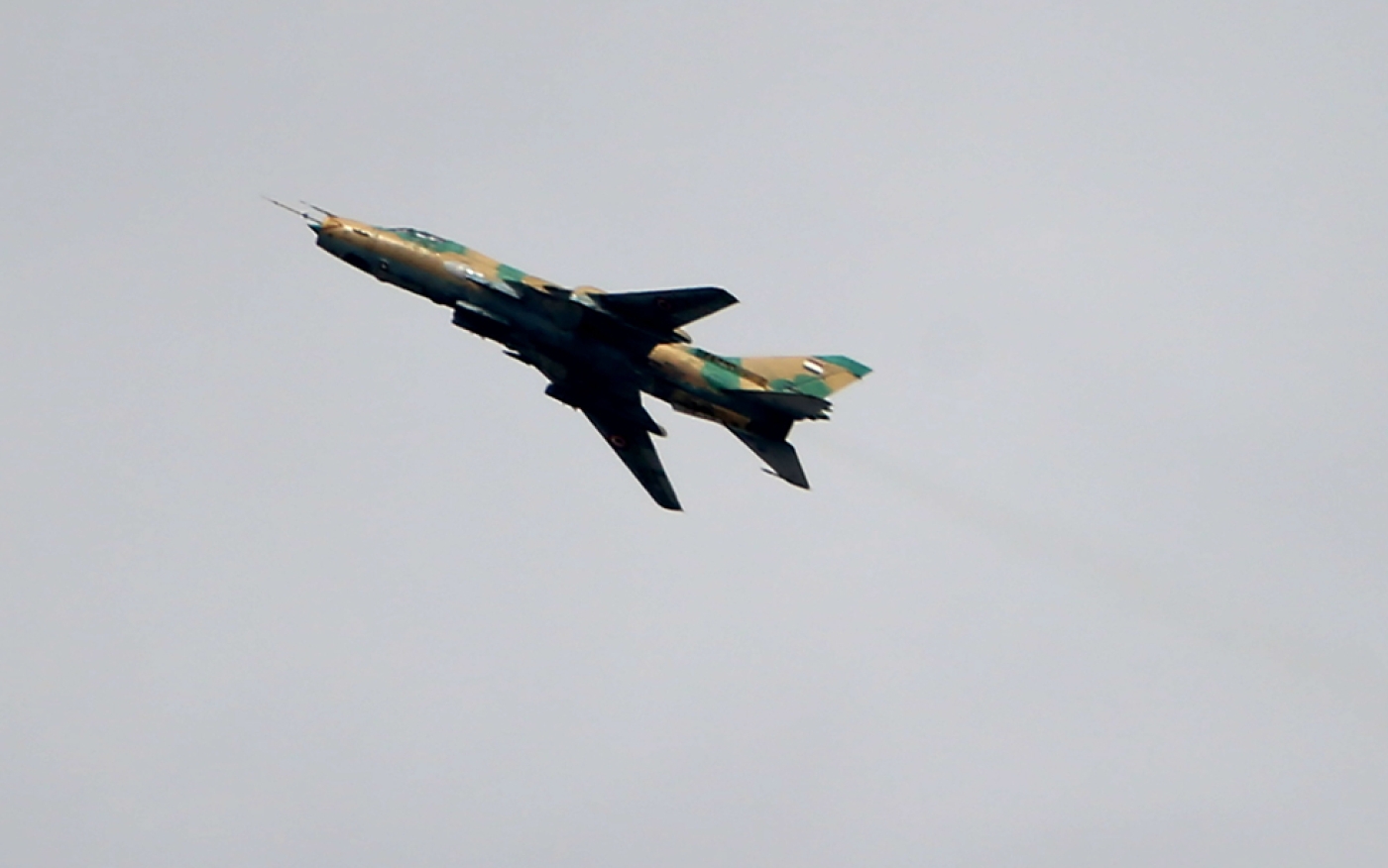 The Israeli army said the plane was a Syrian Sukhoi fighter jet, as in this file photo (AFP)
By
MEE and agencies

Israel said it shot down a Syrian jet fighter that crossed into the Israeli-occupied Golan Heights, with Damascus accusing Israel of helping the Islamic State, as it said the jet was fired on as it took part in operations against the group.

The incident added new fuel to weeks of tensions over the Golan, a strategic Syrian plateau annexed by Israel for more than 50 years, where Israel has been on high alert as Syrian government forces supported by Russia close in to regain nearby rebel-held ground.

For the second time in as many days, Israeli sirens sounded on the Golan and witnesses saw the contrails of two missiles flying skyward.

The Israeli military said it fired Patriot interceptor missiles at a Syrian Sukhoi jet that crossed 2km into Israeli-controlled airspace, after first trying to warn it off.

"It was shot down and it crashed... most likely in the southern part of the Syrian Golan Heights," Israeli military spokesman Lieutenant-Colonel Jonathan Conricus said.

"We do not have any information so far about the pilots. I do not know of any reports of parachutes being spotted, and we do not know if any pilots have been retrieved."

Syrian state media said that a Syrian warplane had been targeted by Israel while conducting raids in Syrian airspace.

"The Israeli enemy confirms its support for the armed terrorist groups and targets one of our warplanes, which was striking their groups in the area of Saida on the edge of the Yarmouk Basin in Syrian airspace," official news agency SANA quoted a military source as saying.

An Israeli military statement appeared to acknowledge that its mission was related to the civil war next door.

It said Israel would "continue to operate against" any breach of a 1974 UN armistice deal that established buffer zones on the Golan.

There has been "a disturbing trajectory of increasingly frequent and dangerous confrontations" between Israel and Syria, the United Nations Middle East envoy warned on Tuesday, following the incident involving the Syrian fighter jet.

"I call on all parties to abide by all the provisions of the 1974 agreement and support the role of UNDOF in that regard," Nickolay Mladenov told the UN Security Council, referring to the UN Disengagement and Observer Force which monitors the 1974 Israeli-Syrian accord in the Golan Heights.

Speaking at the UN in New York on Tuesday, Danny Danon, Israel's ambassador to the UN, said: "Israel will not allow any violation of our sovereignty."

Danon said Syria was warned not to breach the 1974 Separation of Forces Agreement.

"We seek no escalation in the region," he added.

Israel has reacted strongly to any movements that could be perceived as Syrian President Bashar al-Assad defying the 1974 demilitarisation or allowing his Iranian and Lebanese Hezbollah allies to deploy there.

The raised Israeli-Syrian tensions have prompted intercession by Moscow, which sent its foreign minister, Sergei Lavrov, and top general on Monday for talks with Netanyahu.

Also on Monday, Reuters witnesses on the southern edge of the Israeli-occupied Golan saw numerous warplanes and helicopters in the skies over Syrian territory.

The aircraft were dropping bombs, apparently as part of a Russian-backed Syrian government push into areas previously held by anti-government forces.

Anti-aircraft fire could also be seen, targeting the warplanes.

In February, an Israeli F-16 jet was brought down by Syrian anti-aircraft fire.

That warplane crashed in northern Israel while returning from a bombing raid on what Israel said was an Iranian military installation in Syria. Both pilots ejected and were injured, one critically.