Lalela Mswane, the winner of Miss South Africa 2021, has been urged to boycott the event (Screengrab/Instagram)
By
Nadda Osman

Mandla Mandela, the grandson of the former president of South Africa, has urged countries to boycott the Miss Universe event that is due to be held in Israel in December, citing the occupation of Palestine.

In a statement earlier this week, Mandela said that he calls on all former Miss South Africa winners to boycott the event in protest over the "occupation and cruel treatment of Palestinians at the hands of apartheid Israel regime".

"There is nothing beautiful about occupation, brutality and institutionalised discrimination against the Palestinian people," he added.

Mandela also used his Instagram account to call for the boycotting of the event, comparing the occupation of Palestine to apartheid South Africa.

"Apartheid Israel's occupation is no less despicable than apartheid South Africa. The world responded to our call to stand in global solidarity against the apartheid regime. Now we reiterate our call to boycott, divest and pass sanctions campaigns against apartheid Israel," the caption read.

"We must not support or legitimise the victimisation of our Palestinian brothers and sisters," he wrote.

In a follow-up post, Mandela praised Miss Universe Malaysia and Miss Indonesia for withdrawing from the event, calling it a heroic and brave stance. Mandela also used the post to highlight illegal Israeli settlements which violate international laws.

'All of them hate women'

Sarah Idan, an Iraqi-American model who was crowned as Miss Universe Iraq in 2017, responded to Mandela's statement in a video posted on Twitter, condemning him for his post.

"All I can say is how dare you? How dare you as a man try to tell an organisation for women, and women empowerment what to do," she said.

"This is an opportunity that millions of women dream of having to go on the world stage and represent their people, their nation and culture - not governments, not politics and definitely not political agendas."

The model also criticised Mandela for using the term apartheid, saying that it is a term only used by radical Islamists and organisations such as Hamas, the Taliban and the Iranian government.

"All of them hate women and women's rights, please allow Miss South Africa to go and experience Israel up close... she will be shocked to see, just like myself, that the Israeli government consists of Muslims, Jews, Arabs and Christians," she concluded.

Israel will be hosting the Miss Universe competition for the first time in the southern resort of Eilat, bringing together competitors from 100 countries.

This is not the first time Israel has been condemned for hosting an arts and culture festival, with activists citing the occupation of Palestinians.

In 2019, activists protested against the Eurovision song contest hosted in Tel Aviv, in an effort to bring attention to the plight of Palestinians. Many also criticised singer Madonna for her planned performance at the event, using social media to demand that she cancel her appearance. 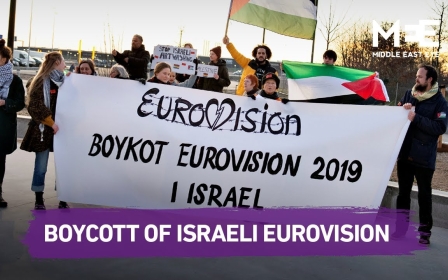