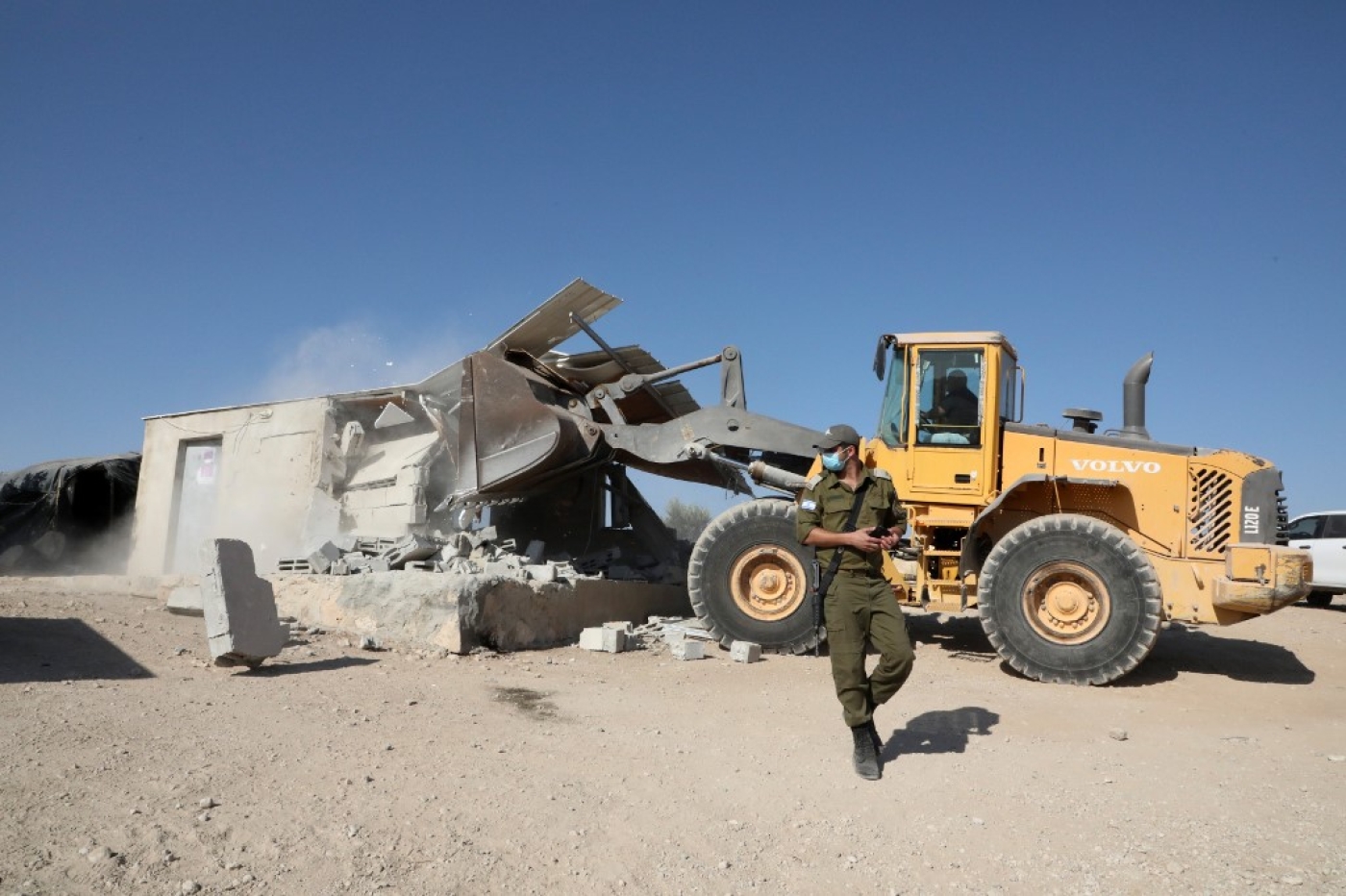 An Israeli bulldozer demolishes a Palestinian farm in the village of al-Fikheet within area C, south of the occupied West Bank, 18 October 2020 (AFP)
By
MEE staff

Israeli demolitions of Palestinian properties have hit a four-year high, making hundreds of Palestinians homeless in the occupied East Jerusalem and the West Bank, according to data from the Israeli rights group B’Tselem.

The data, compiled between January and September, shows that at least 741 Palestinians have lost their homes to demolitions by Israeli authorities on the grounds of lacking building permits.

The latest figures are the highest statistics since 2016, where a record breaking number of house demolitions left 1,496 Palestinians homeless. Since January, Israeli authorities have ordered the demolition of 100 housing units in East Jerusalem and 99 houses in the West Bank.

Israel makes it almost impossible for Palestinians to get building permits, while the government plans and expands settlements in the West Bank regularly.

Almost 68 Palestinian house owners have self-demolished their own properties, otherwise they would be forced to pay the fee of the bulldozer and the equipment used by Israeli authorities to carry out the planned demolition.

These demolitions are widely viewed as illegal, according to international law, and to OCHA, the United Nations’s humanitarian office, which has called on Israel to stop the practice.

This year, the demolitions come amid a pandemic that has hit Israel and Palestinian territories hard, affecting the economy and the livelihood of Palestinians in East Jerusalem and the West Bank.

"To Israeli authorities, a global pandemic is no reason to stop demolishing Palestinian homes," Amit Gilutz, the spokesperson for B'Tselem, said.

"Both in the de facto annexed West Bank and East Jerusalem, Israel has left hundreds of people with no shelter during this unprecedented global health and financial time of emergency.”

In Israel, 2,569 have died of coronavirus since March, while 565 deaths were recorded in Palestine.

Gilutz added that Israel has issued new military orders to speed up the process of annexing one third of the West Bank, which is a strategic area, rich in water and minerals.

The annexation was scheduled to be announced early in July, but was postponed after Israel, the United Arab Emirates and Bahrain announced and then signed a normalisation agreement on 15 September.

“The uproar against Israel's threat to officially annex the West Bank has subsided, but the very real de facto annexation on the ground is implemented in cruel efficiency,” Gilutz said.