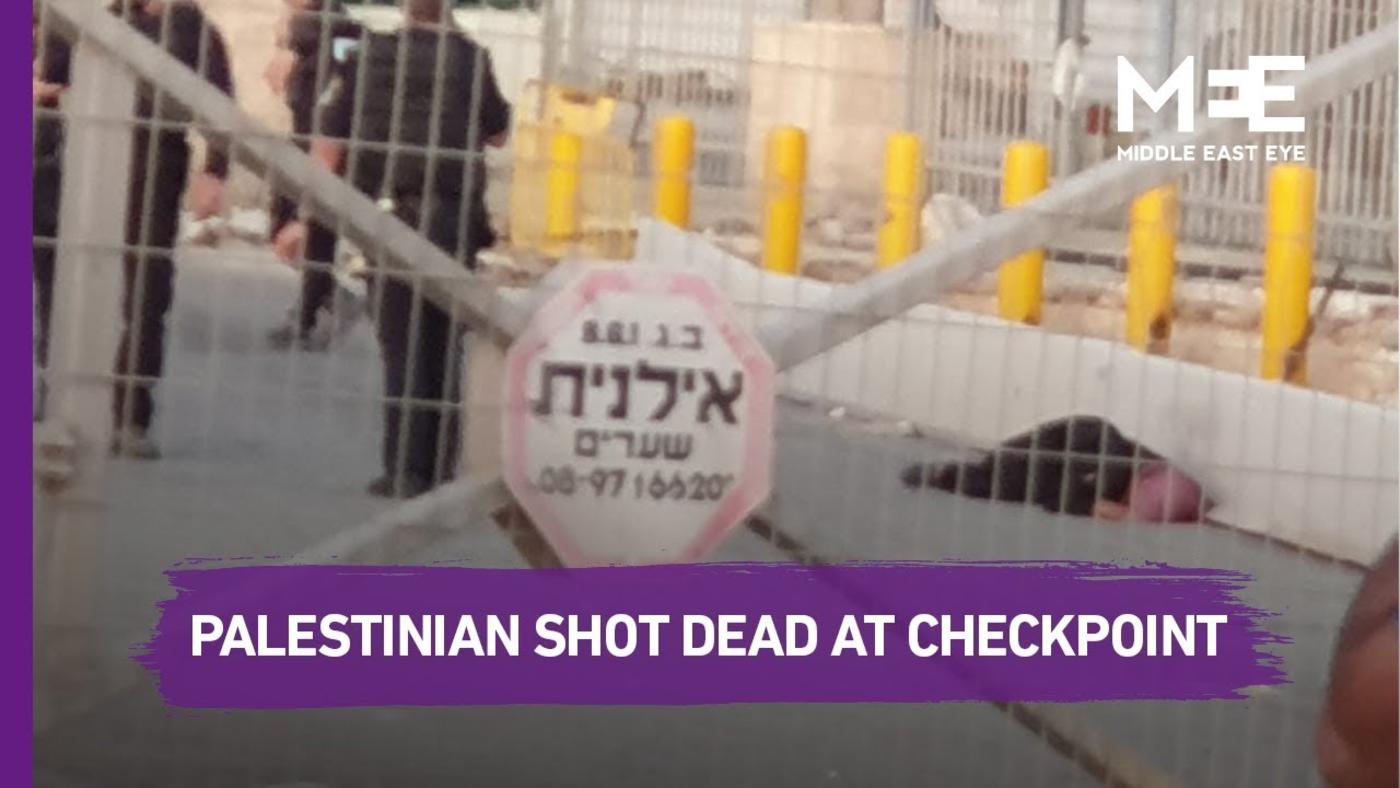 Video circulated on social media showed security guards with rifles confronting a woman at the Qalandia checkpoint who is several metres away (Screenshot)
By
Shatha Hammad
in
Ramallah, occupied West Bank

A video circulating on social media - confirmed by Middle East Eye to be authentic - showed men with rifles wearing private security uniforms confront a woman standing several metres away. A shot is heard and she collapses, dropping an item to the ground, which one of the security guards then appears to kick out of reach.

'They were five soldiers and she was some seven metres away. They deliberately killed her'

Mohammed Hammad Jaradat, a bystander from Jerusalem, told MEE that the woman had seemingly entered the wrong section of the checkpoint on foot and was trying to reach the bus section.

Israeli security forces then started shouting at her and chasing after her, at which point, Jaradat said, she lifted up a small knife

"They could have controlled her,” Jaradat said. “They were five soldiers and she was some seven metres away. They deliberately killed her, not only to kill her, but to scare us Palestinians who cross the checkpoint every day travelling between Ramallah and Jerusalem."

The Palestinian Authority health ministry confirmed that the woman, who remained unidentified, succumbed to her wounds at an Israeli hospital in East Jerusalem. The Palestinian Red Crescent said in a statement that Israeli forces prevented its medics from reaching the woman and providing her with first aid.

An Israeli police spokesman said in a statement that a "female terrorist attempted to carry out (a) stabbing attack" at Qalandia checkpoint, posting a picture of a knife on asphalt.

Alaa Rimawi, the director of the Center for Jerusalem Studies, told MEE that a study by the centre estimated that 56 percent of Palestinians killed by Israeli forces in the occupied West Bank and Jerusalem since 2015 were killed at checkpoints, adding that Qalandia was a flashpoint for such deadly shootings.

"These repeated executions have become a concern for Palestinians who are forced to cross the checkpoints every day," Rimawi said.

Following the shooting, Israeli forces attacked Palestinian civilians in the area, sprayed tear gas, and prevented workers from entering the checkpoint, before closing it in both directions.

The West Bank had already been on lockdown on Tuesday for Israel's general election, barring an estimated 150,000 Palestinians with Israeli work permits from crossing through checkpoints according to Palestinian officials.

Rimawi denounced improper procedures, such as insufficient warnings by soldiers before firing, the use of live bullets, and a disregard of army regulations calling for alleged would-be attackers to be shot in the lower limbs to avoid loss of life.

He also said his organisation had documented at least 36 cases since 2015 in which Palestinians were killed despite “no evidence of possessing an object threatening soldiers' lives".

For Helmi al-Araj, the director of the Centre for Defense of Liberties and Civil Rights, photographic and video evidence of killings carried out by Israeli forces serve to expose a recurring practice in the occupied Palestinian territories, regardless of whether Palestinians posed an actual threat.

“All documentation is extremely important to use against Israeli soldiers and settlers and prosecute them for war crimes, and the continued incitement to kill Palestinians,” Araj told MEE - pointing to the killing of Palestinian Abd al-Fattah al-Sharif in Hebron in 2016.

Video of Sharif’s execution-style killing sparked international condemnation and led to a widely publicised trial in which the soldier, Elor Azarya, became one of only a few Israeli soldiers to be sentenced to prison - albeit briefly - for killing a Palestinian.

According to the United Nations Office for the Coordination of Humanitarian Affairs (OCHA), Israeli forces killed 20 Palestinians in the West Bank this year as of 2 September.

Between 2015 and 2016, a wave of violence, left an estimated 236 Palestinians and some 34 Israelis killed - with a significant portion of Palestinian casualties killed by Israeli forces in annexed East Jerusalem and the occupied West Bank.