Settlers' attacks on Palestinian properties have been on the rise, with 36 in October alone 'Today they burned the vehicle, but my fear is that tomorrow they might burn my house,' Rollin Basir told MEE (MEE/Shatha Hammad)
By
Shatha Hammad
in
Ramallah, Occupied West Bank

The Basir family woke up in the early hours of Friday morning to the sound of their neighbours shouting - there had been an attack on their home in the Palestinian village of Taybeh.

A group of Israeli settlers had left hostile writing on the walls and had burned the family's car. But the attackers were nowhere to be be seen when Rollin Basir opened his front door at 2am (0.00 GMT) and saw that his car was on fire. It burned until 6am.

Basir said that all of the village residents flocked to the house as word of the attack spread, and stayed until late in the morning. The villagers spoke of their fears that the settlers would repeat such attacks or target people and their homes.

"All the data point to the settlers being behind this attack," said Basir, adding that the car had cost him over $42,000.

Taybeh is located east of Ramallah and is besieged by four settlements: Rimonim - which is completely built on the lands of the confiscated village (1 million square metres) - Ofra, Kawkab al-Sabah, and the evacuated Amona outpost, where Israeli forces still prevent Palestinians from accessing their lands there.

Basir - a father of three children aged between 15 days and seven years - said the vehicle's alarm must have frightened the settlers and made them get out of the place quickly.

"Today they burned the vehicle, but my fear is that tomorrow they might burn my house, while my children are inside."

'This land is Palestinian'

Father Johnny Abu Khalil told Middle East Eye that the villagers heard the sound of an alarm, but it was the smoke that led them to Basir's house.

Abu Khalil said that the settlers' attack represents a real danger to the people of Taybeh.

"We are surrounded by settlements. Today it was an attack by burning a vehicle, but we fear that these attacks will escalate to include the burning of trees, houses and churches in the village."

"The Israeli settler does not distinguish between one town and another, nor between a Palestinian Muslim and a Palestinian Christian ... The settler considers the land is his land, and we Palestinians have to get out of here," he said.

"Our message today to the occupation and its settlers is that even if they burned us humans, these stones will utter that this land is Palestinian, the cradle of Christ and the prophets." Abu Khalil claimed that a group of settlers verbally assaulted a group of French nuns while on a tour of Taybeh's mountains in April and held them for hours before members of the monastery found them.

The priest also claimed that one of the settlers had taken off his clothes and stood naked in front of the nuns.

“The nuns were in a state of panic ... after this attack they decided to leave Taybeh and go back to France. However, residents contacted the French consulate and the nuns returned to Palestine," Abu Khalil said.

Settler attacks on Palestinians and their properties have been on the rise lately. In October alone, 36 attacks took place, including the cutting down of olive trees - which represent a source of livelihood to countless Palestinian families - racist slogans and assaults on cars, according to the Israeli news website Walla.

The escalation comes as US Secretary of State Mike Pompeo announced last week that Washington no longer considered Israeli settlements in the occupied Palestinian territories to be “inconsistent” with international law.

Issa Zayed, deputy mayor of the Taybeh council, said that the village witnessed attacks by settlers during the first intifada, or uprising (1987-1993), but this latest attack was a very dangerous sign.

"We condemn and reject this attack by the settlers who are supported by the Israeli government ... This attack is a result of continued American support for Israel and legalising settlements in the West Bank," Zayed told MEE.

Zayed said in regards to protective measures for the villagers, the council advised the residents to remain vigilant, especially around the entrances to the village.

"This [attack] will not stop our steadfastness in our historic village," he said. Occupation
When it comes to human rights, the US is guilty of blatant hypocrisy
Ramy Abdu 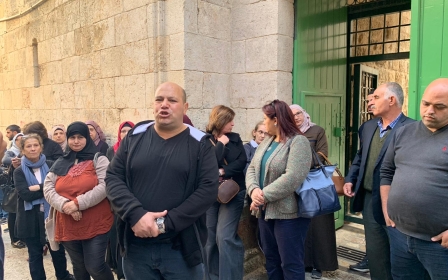