Israelis slowly wake up to the Nakba 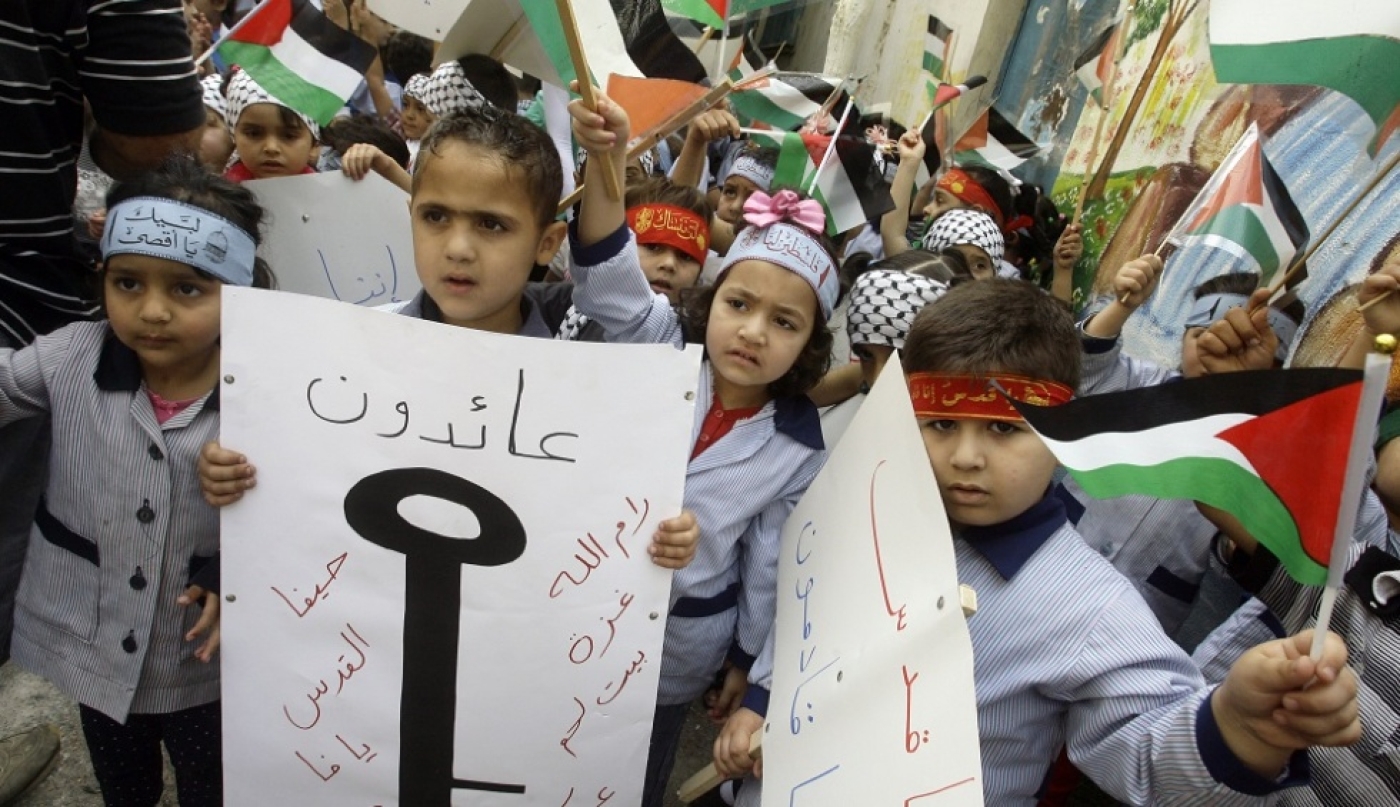 Palestinian children hold up pictures of keys, symbolising the homes they left behind (AFP)
By
Jonathan Cook

LUBYA, Israel - Palestinians are due to stage marches in both the occupied territories and Israel Thursday to commemorate the loss of their homeland 66 years ago – an event they call the Nakba, or “Catastrophe” – a little more than a week after Israeli Jews celebrated the anniversary of the Jewish state’s birth.

But for many Israeli Jews, it is becoming ever harder to mark their Independence Day without confronting the fact that Israel’s establishment created a new set of victims, said Eitan Bronstein, founder of Zochrot, or “Remembering”, an organisation dedicated to teaching Israeli Jews about the Nakba.

“Once, the Nakba was a non-issue for Israeli Jews. Many had never heard of it or didn’t know what the term meant. But now it is unavoidable. Israelis have to face it.”

Long excluded from the Israeli national discourse, the Nakba – and the ensuing destruction of hundreds of Palestinian villages – is slowly forcing itself into the consciousness of ordinary Israelis. And that is creating new sources of tension and potential conflict.

Last week, as Israeli Jews held street parties celebrating Independence Day according to the Hebrew calendar, some 20,000 of their compatriots – Palestinians citizens of Israel – gathered in a forest half way between Nazareth and Tiberias. In the largest Nakba procession ever staged in Israel, they waved Palestinian flags as they marched to Lubya, one of more than 500 Palestinian villages destroyed in the aftermath of Israel’s creation.

As has become typical in recent years, the march produced a counter-demonstration: hardline Jewish nationalists staged noisy celebrations close by, fervently waving Israeli flags and trying to get as close to the march as police would allow.

Scenes of the Nakba procession – all over social media, as well as the Israeli news – upset the Israeli right. Avigdor Lieberman, the foreign minister, and Israel is Our Home member, called Palestinian citizens who joined the march “a fifth column whose aim is the destruction of Israel". He added that their rightful place was not in Israel but “Ramallah”, where the Palestinian Authority is headquartered.

Numbering 1.5 million, the Palestinian minority comprises a fifth of Israel’s population. Able to reach the destroyed villages, unlike most Palestinian refugees, they have increasingly shouldered the struggle to keep alive the memory of what was lost in 1948.

Most Israeli Jews, however, regard efforts to revisit 1948 as a threat to Zionism, said Bronstein. A long-standing consensus in Israel is that any concession to Palestinians on the refugee question could open the door to the right of return, destroying Israel’s Jewish character.

Matan Peleg, Im Tirtzu’s director, said: “The left is trying to promote these Nakba events to make Israelis feel guilty about our Independence Day. But Israelis aren’t falling for it. We know who started the war.”

Israel has long insisted that the many Palestinians left of their own accord or that their exodus was possibly even coordinated by Arab leaders. Palestinians in turn have always vehemently denied this narrative and insist that the civilian population was forced out.

Peleg said Israel respected the human rights of its Arab population more than any Arab state in the Middle East. “Israelis are made angry by the hypocrisy. When we see the Palestinian flag being raised, we know that they [those on the march] don’t want Israel to exist.”

Sights like those at Lubya are likely to fuel a “harsh” reaction from Israel, said Ilan Pappe, an Israeli historian and expert on the events of 1948. “Unfortunately, we are likely to see more draconian legislation in the future and the possibility of brutal violence,” he said.

The Israeli parliament has already passed a law preventing any publicly-funded institution – such as schools, universities and libraries – from providing a voice to the Palestinian narrative of 1948.

Ziad Awaisi, one of the Nakba march organisers, said such moves were only galvanising the resolution of Palestinians on the refugee issue. “A new, young generation is ready to be more assertive about the Nakba and the rights of the refugees. They are willing to confront the Israeli authorities,” he said.

Estimates are that one in four Palestinian citizens of Israel belongs to a family expelled from its home in 1948, making them a potentially powerful force in Israel for a historical re-evaluation.

The “March of Return” has been held annually since 1998, each year to a different destroyed village. In recent years, the number of participants has swelled dramatically, with young families and youths playing an ever greater part.

The erased village of Lubya is covered by a pine forest known to the Jewish population as Lavi Park and nowadays chiefly visited by walkers, cyclists and families out for a barbecue.

Avraham Burg, a former speaker of the Israeli parliament who has emerged in recent years as a stern critic of Israel’s treatment of the Palestinians, asked in a commentary last week: “Can the Nakba and Independence coexist in the same space?”

Calling Israelis ”insensitive”, he wrote: "All around the country, cemeteries were desecrated, holy places were turned into storerooms and animal pens, entire villages were wiped off the face of their tilled earth, and one person’s place of mourning and devastation became another’s place of leisure and holiday-making.”

At Lubya, refugees spoke longingly of their desire to return to a village that was once home to nearly 3,000 Palestinians. Many were among the 750,000 Palestinians forced out of the new state of Israel in 1948 and into refugee camps across the region.

Awaisi said the large attendance at this year’s march may have reflected in part the fact that a significant proportion of Lubya’s refugees ended up in Yarmouk, a camp in Damascus that is now caught in the midst of Syria’s civil war.

“It is important that we show the refugees that we are active on their behalf, especially when the Palestinian leaders [based in Ramallah] grow ever quieter on the right of return.”

But, he added, local tensions were also driving a renewed interest in the Nakba. “The recent attacks on our communities, including mosques and churches, and the failure of the police to do anything, are a reminder to people that our presence here is under threat. This march was a way to say: We are here and we are not going anywhere.”

Nakba initiatives inside Israel are taking off on various fronts, adding to the tension with Israeli Jews.

Zochrot, or Remembering in Hebrew, is a small but growing organisation of Israelis – Jews and Palestinians – that says its goal is to be “provocative”, said Raneen Jeries, the group’s media director. “We want to make them [Israeli Jews] angry. That is how we raise awareness. They have to take note of the history they were not taught at school.”

Last week Zochrot launched a phone app called iNakba, the first of its kind. In three languages, English, Arabic and Hebrew, it flags up on an interactive map all the Palestinian villages destroyed in 1948, allowing users to locate them and share information.

Jeries said it had been an instant success, gaining thousands of downloads on its first day.

“Colonial regimes like Israel use maps as a political tool, to erase communities, heritage, even nations. But this app puts Palestine back on the map. With the help of users, it will create the most accurate map ever and reconnect the refugees to their villages.”

For the past decade Zochrot has been running regular visits for Israelis to the ruins of different villages, often buried under pine forests and hidden inside gated communities reserved for the Jewish population.

Zochrot has created a “nakba kit” for teachers, though it is barred from use in the classroom by education officials.

The group has also created an archive of filmed interviews with veteran Israeli fighters from the 1948 war, who admit their role in expelling Palestinians and, in some cases, participating in massacres. Most Israeli Jews are still taught a long-discredited narrative that Palestinians fled under orders from Arab leaders.

Last year Zochrot held the first-ever conference on the practical implementation of a right of return, at a time when most Israeli Jews still reject even the principle.

Groups of refugees inside Israel have been trying to reclaim mosques and churches, usually the only buildings still standing in the destroyed villages, defying Israeli orders that have typically declared the ruins “closed military areas”.

In two destroyed Christian villages in the Galilee, Biram and Iqrit, youths have set up encampments next to the surviving churches, daring Israel to force them out.

Such efforts are leading to confrontations.

Last month a refugee family that tried to hold a baptism in a church at al-Bassa, now the industrial zone of the northern Jewish town of Shlomi, was attacked. A group of Jewish residents reportedly called them “stinking Christians” and smashed the camera of the official photographer.

Shlomi’s mayor, Gabi Naaman, told the Haaretz newspaper that refugee families trying to renovate or use the church were “trespassing”. He added that the building was too dilapidated to be safe. “I will act to close the place down because it’s dangerous, and I will block any entry to it in the future."

At other sites, such as at the historic mosque of Ghabsiyya, east of Acre, Israeli authorities have been trying to prevent refugees from using the building by sealing it off with razor wire and high walls.

According to Pappe, as Israelis are faced with the realities of 1948, there is likely to be an ideological entrenchment. “Israelis may admit the ethnic cleansing [of 1948] but then they say it was justified, or that the Palestinians were the successors of the Nazis, or that Israel was going to be exterminated.”

But Jeries insists that the work of the Nakba groups is only just beginning. “Israeli society now acknowledges the Nakba. But there is much more to be done," Jeries said. "Israeli Jews don’t yet want to take responsibility for it: to fix historical injustices and take back the refugees. It is going to be a long process.” 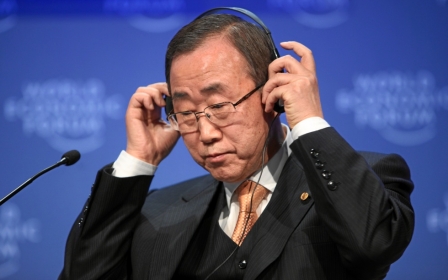