Israel's participation in US Gulf coalition will trigger a war, Iran warns Israeli involvement in a US-led coalition to patrol the Persian Gulf could lead to war, Iranian officials have said, as tensions continue to mount between Tehran and the West.

A former Iranian military commander has suggested that Israel was seeking to make its presence felt, responding to the presence of Iranian troops in the Golan Heights, while a former Iranian diplomat has downplayed the lengths to which both countries are prepared to go to war.

The US announced its decision to form the protection force in July, days after Iranian forces downed a US drone near the Strait of Hormuz, through which nearly one-fifth of the world's oil is shipped.

US President Donald Trump said he came within 10 minutes of launching military strikes against Iran after the incident.

In the weeks that have followed, tensions have only ratcheted up further. On 20 July, Iran captured the Steno Impero, a British-flagged oil tanker travelling in the strait, days after the British seized an Iranian tanker off Gibraltar.

Meanwhile, the US has been recruiting allies for the coalition. They will reportedly patrol the waters and escort commercial vessels while the US provides command ships leads on surveillance efforts.

France has declined to take part, as has Germany, which fears being pulled into a war against Iran. Britain, meanwhile, has sent three warships to the Gulf.

While the Israeli government has yet to formally comment, Iranian leaders have reacted strongly to the media reports, even reportedly reaching out to Oman, Kuwait and Qatar to discuss concerns.

This week, Iranian President Hassan Rouhani weighed in, warning that the Israelis "better ensure the security of where they are".

"They have brought about insecurity, massacre and terror wherever they were present. The main cause of terrorism, war and massacre in this region is the Zionists and the usurper Israeli regime," he said.

Former diplomats and analysts who spoke to MEE said they believe Israeli Prime Minister Benjamin Netanyahu has several reasons to join the coalition.

Fereidoun Majlesi, a former senior Iranian diplomat who served in the US before the 1979 revolution, said there is no need for British forces, let alone the Israeli military. Rather, he said, Netanyahu was seeking to provoke Tehran.

"Israel believes Iran is getting close to having a nuclear bomb. Netanyahu doesn't want to see Israel losing its only advantage over Tehran. That's why they want to start a war."

A war would also, he said, be useful for Netanyahu as Israel's re-run elections are set to be held just weeks away. Netanyahu was unable to form a coalition government in the earlier elections run in April.

"By triggering a war, nationalists groups and Zionists will be mobilised to stand behind Netanyahu ahead of the election," Majlesi said.

Hossein Kanani-Moghaddam, a former commander of the Iranian Revolutionary Guard Corps (IRGC), told MEE he thinks Israel wants to be in close proximity to Iran as a counterbalance to Iranian-backed forces in Syria.

"After Iran got close to the Golan Heights, and we reached the borders of Israel, Tel Aviv now wants to have a similar advantage," he said.

"Israel wants to be near Iran's borders through establishing a naval base in the Persian Gulf."

However, Sabah Zangene, a former Iranian diplomat to the Organisation of Islamic Cooperation, said he doesn't believe Israel will actually end up joining the coalition.

"Israel won't do anything beyond the announcement of joining the coalition as Tel Aviv and the region aren't ready for a military confrontation," Zangene said.

"This is just propaganda by Netanyahu in line with his plans inside and outside Israel."

But if Israel does, in fact, join the coalition, Kanani-Moghaddam, who was an IRGC commander during the eight-year Iran-Iraq war, said any positions it establishes in the Gulf will be "struck by our missiles without any advanced notice".

"If the Israeli forces enter the Persian Gulf, they will be targeted along with those countries who help them," he said. 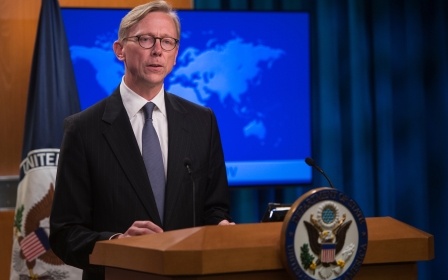