Mohammed al-Qiq, whose health has deteriorated rapidly, has been on hunger strike for over two months People hold banners of Palestinian journalist Muhammed al-Qiq, who is on a hunger strike in Israeli prison, during a protest at Beit El check point in Ramallah, West Bank on 22 January 2016 (AA)
By
MEE and agencies

A hunger-striking Palestinian journalist will remain in jail despite warnings over his deteriorating health, Israel's top court ruled on Wednesday.

The Supreme Court said it would not release Mohammed al-Qiq immediately but would monitor his health on a daily basis.

Qiq has been on hunger strike for 64 days over his detention under Israel's administrative detention law, which is subject to indefinite renewal.

His organs are at risk of failure any day, his legal team says.

Qiq's family told reporters on Monday that he was slipping in and out of consciousness and had lost the ability to talk.

He is now held in HaEmek hospital in the northern town of Afula, with seven Israeli security officers standing guard in and around his room.

The European Union on Wednesday said it was "especially concerned" about his deteriorating health.

His lawyer Jawad Boulus asked the Supreme Court to release him but the three judges ruled that an earlier decision by a military court to detain him was legal.

Boulus said the judges were "briefed on classified material and are convinced that Muhammed al-Qiq constitutes a danger to the security of Israel," so declined to overturn the military court's ruling.

Qiq, from Dura in the occupied West Bank, was arrested on 21 November by Israeli authorities. He began his hunger strike a few days later.

Palestinian member of Knesset Bassil Ghattas told Middle East Eye on Tuesday during a protest held outside Afula hospital that al-Qiq's hunger strike was in protest at his detention without any charges levelled against him.

"Mohammed al-Qiq has only one legitimate demand," Ghattas continued. "Either to be released from custody or to be tried in court."

Amnesty International echoed his demands and said that Qiq was mistreated and tortured in ways that violated international law.

Qiq was previously jailed for a month in 2003 and then for 13 months in 2004 for Hamas-related activities.

In 2008, he was sentenced to 16 months in prison on charges linked to his activities on the student council at the West Bank's Birzeit University. 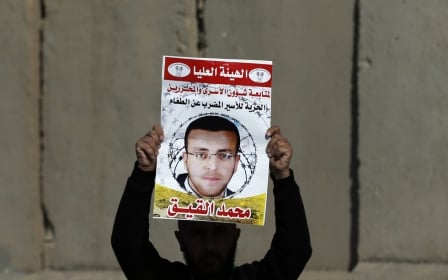 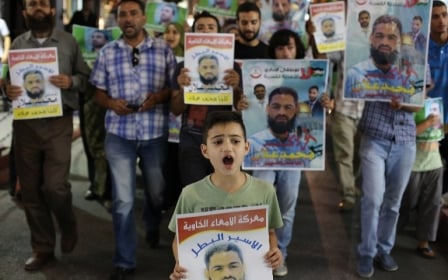