"As the police entered the compound masked youths fled inside the mosque and threw stones at the force," a police statement said.

Following the withdrawal, he added, Israeli police stationed at the gates of the compound began allowing Palestinians back into the area after taking their identification cards.

Police said they entered the hilltop compound to ensure that Muslim youths massing there did not harass Jews or tourists during the morning visiting hours. The site is sacred to both Jews and Muslims.

The statement added that three protesters were arrested and visits went ahead as planned to the site, the third-holiest in Islam and venerated by Jews as the Temple Mount.

Al-Khatib added that an elderly Palestinian man was taken to the hospital in critical situation. Israeli forces also stormed the Al-Qibali Mosque, attacked Muslim worshipers and arrested seven others.

Occuption forces attacked all the worshipers by chain gates and brutally attacking everyone now. #AlAqsaUnderAttack pic.twitter.com/aaiVfexhwi

An AFP journalist outside the gate saw a Jewish visitor leaving the compound scuffle with Muslims outside.

Non-Muslims are allowed to visit the compound, but Jews must not pray or display national symbols for fear of triggering tensions with Muslim worshippers.

Muslims fear Israel will seek to change rules governing the site, with far-right Jewish groups pushing for more access and even efforts by fringe organisations to erect a new temple.

Jewish extremists had called on followers to storm the Al-Aqsa Mosque during Rosh Hashanah, the Jewish New Year.

For Muslims, Al-Aqsa represents the world's third holiest site. Jews, for their part, refer to the area as the "Temple Mount," claiming it was the site of two Jewish temples in ancient times.

Some extremist Jewish groups have called for the demolition of the Al-Aqsa Mosque so that a Jewish temple might be built in its place.

In September 2000, a visit to Al-Aqsa by controversial Israeli politician Ariel Sharon sparked what later became known as the "Second Intifada," a popular uprising against the Israeli occupation in which thousands of Palestinians were killed. 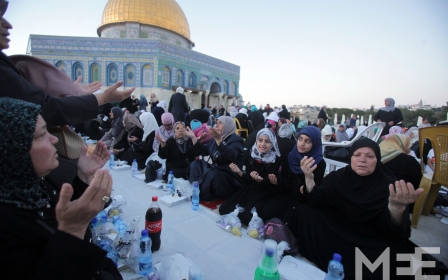