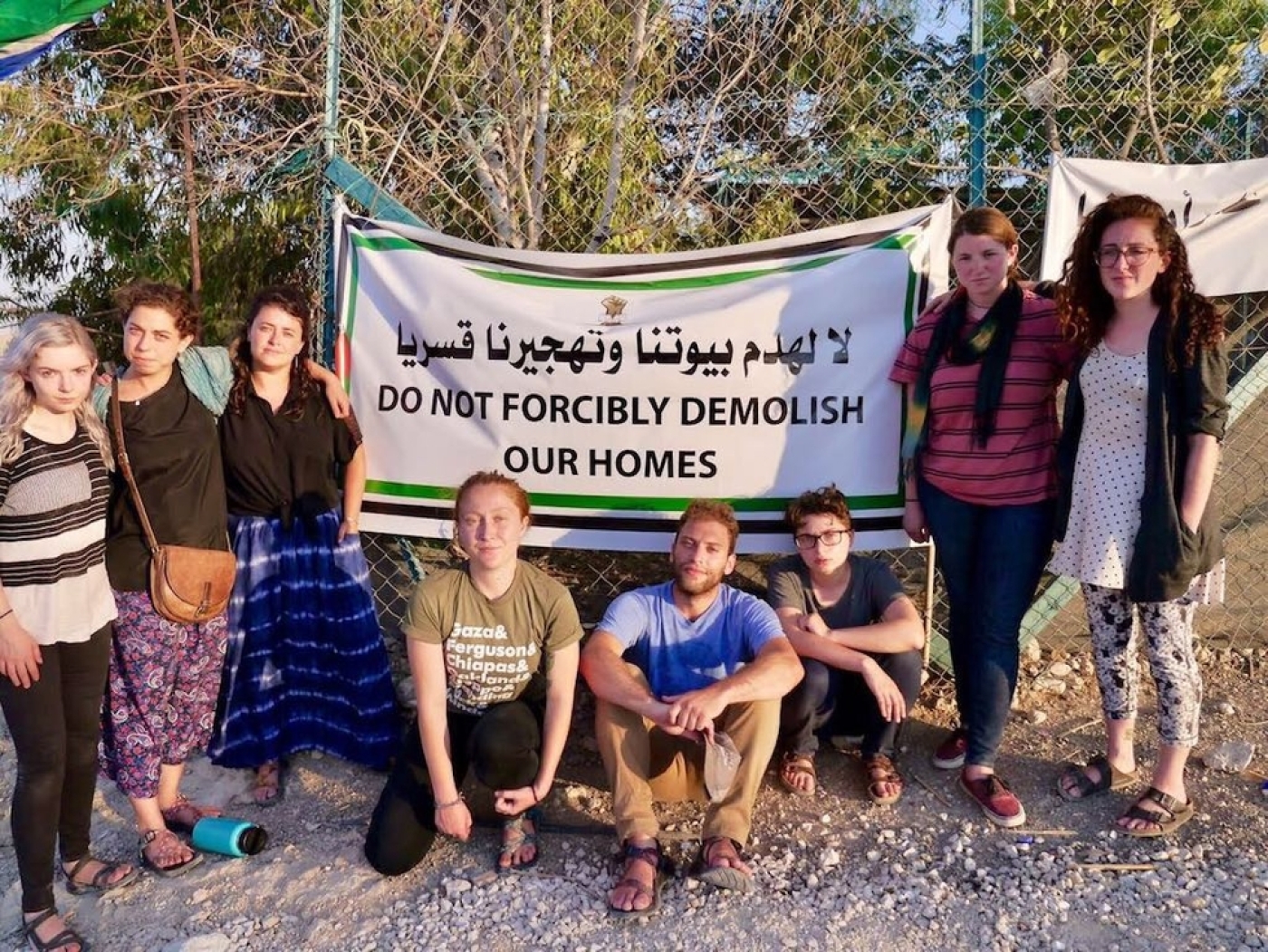 JERUSALEM - Sarah Fadem was standing on the beach in Haifa going through the introduction of the Birthright tour they were about to depart on.

At 22, the young American Jew had chosen the Mindfulness and Meditation trip from the dozens of different "adventures" and "excursions" Birthright offers.

In this introduction on the first day of the tour, Fadem’s Birthright guide led a meditation session and asked for everyone to set their intentions for the coming 10 days.

“I was like, great! That’s exactly what I want to do.”

Two days later, however, when Fadem started asking hard questions about the information presented to their group, they were faced with backlash.

“My trip leader pulled me aside and said ‘This trip is not a political trip. You’re making this really hard, why are you asking all these questions?’” Fadem explained.

They are just hiding...the truth of what’s happening

Birthright offers a completely free trip to Israel for Jews aged between 18 and 26.

The organisation claims it offers “life changing” and “educational” trips.

Birthright states it has an educational core and “is committed to a culture of open discussion and dialogue about all issues” including geopolitics.

It is exactly the lack of education on geopolitics that Birthright provides which made Fadem, along with seven other young Jewish Americans, walk off their tour earlier this week.

Five others left at the end of June for similar reasons.

Each person who left the Birthright tour claims they have been given misguided information and the Israeli occupation was completely covered up.

Becky Wasserman, 26, is another young Jew who walked off the tour last Sunday after constantly being left with no answers to her questions regarding Palestinians and the occupation.

The decisive moment when the eight decided to walk off the Birthright tour came when they visited the City of David archeological area in Jerusalem.

The site is run by Elad, a right-wing Israeli organisation which aims to preserve what it calls the “biblical city of Jerusalem captured by King David over 3,000 years ago.”

“It was really important for us to not go to that spot. It was an absolute turning point for us,” Fadem said.

Elad buys land in the area from the Jewish National Fund after they evict Palestinian families from their historical homes.

Two-hundred meters away from where the Birthright tour was, the Palestinian Sumreen family is facing eviction for this very reason.

After announcing their reasons and live-streaming their walk-off, the eight visited the Sumreen family, with the co-ordination help of Israeli NGOs Peace Now and Free Jerusalem, in order to find the truth they had been seeking throughout the tour.

“We wanted to hear from the family actually being evicted rather than the forces trying to evict them,” Wasserman said.

Hallie Berkson-Gold, 26, walked off the same tour as Wasserman. She emphasised how warmly welcomed they were into the Sumreen family home.

“It was really eye opening to meet the family,” Berkson-Gold explained to MEE.

It’s one heartbreaking story after the next, and these people are still so welcoming to a bunch of Jews

“We took a tour of their house, heard how they’re always under surveillance and have violent settler neighbours.”

“I’ve never felt such a disturbing surveillance - we were on their patio and there was a camera right there,” Fadem interjected.

Wasserman recalled two seven-year-old girls from the Sumreen family approaching the group as they were leaving, telling them to "send a message to the US, all we want to do is just stay in our house."

“That’s what we’ve been hearing again and again. ‘We’re just trying to live our life.’ It’s one heartbreaking story after the next, and these people are still so welcoming to a bunch of Jews, it’s just so amazing to me,” Wasserman said, clearly moved.

Wasserman said she saw a great difference between the narrative offered on the Birthright tour to what she experienced in visiting Palestinian families.

“The narrative on the trip is that Palestinians are terrorists,” Wasserman said.

“We went into East Jerusalem again today and it was fine.”

The lack of any narrative or dialogue on the Birthright tours is just as misleading, she said.

While sitting at a bar in Jerusalem, Wasserman presented a map every person on the tour was given.

“It doesn’t even label the West Bank, it’s all presented as Israel.”

On the map, the West Bank is called Judea and Samaria - the Jewish nationalist term for the region.

Berkson-Gold’s tour started in what was described to them as the north of Israel, standing on top of Mt Hermon, overlooking the Golan Heights.

The Golan Heights has been illegally occupied by Israel since the 1967 Arab-Israeli War.

“That was not information that our tour guide gave us,” Berkson-Gold said, clearly annoyed.

The tour guide made them listen to an excerpt of John Lennon’s song, Imagine, in which the lyrics talk about imagining no religion and no borders.

“At one point I had to say, ‘no I’m not really a huge fan of borders or at least how they’ve worked out because they definitely do a lot more harm than good because of the amount of militaristic violence that happens in the name of security.”

Another instance of Birthright flatly denying the existence of the occupation came when Wasserman’s tour bus passed by the separation barrier on the way to Jerusalem.

“We were right next to it on the highway and the tour guide didn’t mention anything about it, until someone asked – another person who walked off the trip with us – ‘can you say something about what’s happening on our left here?,’” Wasserman recalled.

MEE contacted one of the Birthright tour guides, though was hung up on four times.

Seeing as the Birthright trips are fully paid for, including flights, it is presented as an opportunity not to be missed for America's Jewish youth.

Wasserman was brought up in New York in a Reform Jewish community and house.

It’s not like we’ve done anything illegal, we’ve just violated Birthright regulations. I don’t know how high profile we are at the moment to grab the attention of the authorities

“I guess Israel and [Jewish] education was always part of the upbringing, the love of Israel and the need to go see it for yourself was embedded in my upbringing,” Wasserman said.

“If I wanted a chance to get to this part of the world, [Birthright] was a financially viable way to do so.”

Each of the three Birthright deserters MEE spoke with already had questions in their minds regarding the Israeli occupation before they arrived.

“I guess when the violence in Gaza broke out a few months ago I had a lot more questions and wanted to make sure that was being talked about on the Birthright trip,” Wasserman said.

“It just felt really sad to me that thousands of young Jews go on this trip every year and this is their only exposure to learn about this region and they’re trusting what they’re hearing like it’s the truth, but it’s not.”

After leaving the tour and visiting the Sumreen family, the eight Jewish Americans visited multiple places in the West Bank including the Palestinian Bedouin village of Khan al-Ahmar, which is facing imminent demolition by the Israeli authorities.

“Fifteen minutes into the tour...a rather notorious settler came up to us and started harassing us,” Berkson-Gold said.

“Things were getting more intense. [so we were] trying to stick close together to be safe. Out of nowhere yellow paint goes flying and hits our tour guide...the rest of our tour had to be cut short because we were surrounded.

“It’s nothing like what Palestinians go through but it was scary. I was shocked,” Wasserman said.

Birthright’s response to eight people leaving on Sunday, from two different tours totalling around 76 people, was to cancel all of their return flights to the US, taking their security deposit and threatening to sue them.

When asked what they thought was waiting for them at airport security when they flew from the country, they each replied that they hadn’t had time to think about it.

“I don’t know...it’s not like we’ve done anything illegal, we’ve just violated Birthright regulations,” Berkson-Gold said, as they all erupted in laughter.

“I don’t know how high profile we are at the moment to grab the attention of the authorities.”

I plan to go back and push my Jewish community. I feel accountable to make sure they’re against the occupation

Wasserman said they had heard many stories of anti-occupation Jews being banned from re-entry into Israel.

“Seeing the risks Palestinians are taking everyday, to go to school, or build community centres, the risk I’m taking of not coming back to Israel/Palestine for ten years, it’s minimal,” Fadem added.

At the time of writing, Birthright America was unable to be reached.

On returning to the US, each of those who walked off Birthright plan to use their experience to “raise Palestinian voices”.

“Since we are American Jews we have a unique angle on how we can affect the US Jewish community, which obviously has a lot of sway with what’s happening here,” Wasserman said.

“I plan to go back and push my Jewish community, I feel accountable to make sure they’re against the occupation.

“All these stories I hear [of what Israelis] do in the name of a religion that I feel very connected to is just heartbreaking and I can’t let that continue."